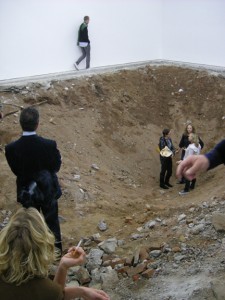 Urs Fischer’s opening at Gavin Brown Enterprises on Greenwich Street was a quiet, exuberant affair. On a quiet, damp corner in the West Village, a murmur could be heard from the gallery. As we walked into the space, it was your typical opening, well-dressed people in black holding cups of warming beer in a vacant white room. However, this room gave way to a little doorway, a portal, literally, into the artwork that we had come to partake of. Here on the wall, a small rectangular hole frames the artist’s world, and as he beckons us inside, he simultaneously forces us to bow and lower our eyes as we enter into a new domain. 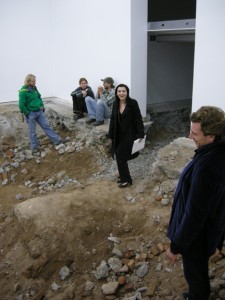 Indeed, once we passed through the doorway, the terrain changed dramatically. In fact, I caught myself with my hands on rugged concrete, as my heel caught the jagged edge of a stone and I tripped down a declining plane of red dirt. Essentially, the entire gallery, from the ends of the walls downwards, was dug out, a vast hole, carefully shaped and forming a sort of inverse pyramid, a human-scale ant lion larvae trap pulling the bewondered and admiring art worlders into its depths. I steadied my gait and took a few steps upwards to my right, where a narrow ledge hugged the “perimeter” of the piece.

Gazing downwards, I saw two girls taking photographs of those at various heights around them. Upwards, a framework of minimal flourescent lights beamed impartially at the setting below. People crouching, lounging, lingering, marveling, smoking cigarettes, now and again a prominent art critic emerging and saying triumphantly, “Take my picture! I’m going to use this in lecture!” or a personality gallerist confiding, “You know, when we excavated our Wooster space, we found a body…” 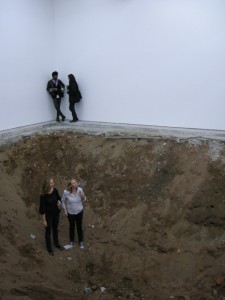 Fischer and Mr. Brown have combined good faith and good work in this immersing show. However, this may not be the first time the Fischer has been given full rein by a prominent dealer. In a previous article noting that several “noticeable” works at Art Basel in June were created by artists exhibiting in the concurrent Venice Biennale 2007, the New York Times called Presenhuber’s (Zurich) booth “striking” remarking that the artist had “designed the entire installation, which includes a series of cast aluminum and enamel doors.” Similarly, the Gucci fête in the Palazzo Grassi, showcasing Pinault’s collection took place all around and below an enormous three story high Fischer sculpture made of hundreds of framed photographs that spilled all around in puddle on the floor as well. If you didn’t make it to Basel this year or to the fabulous parties celebrating the opening of this year’s Biennale, don’t worry. Go and visit Gavin Brown.

The show is up until November 24th, at Gavin Brown Enterprises 620 Greenwich Street (at Leroy just about Houston).

When tackling a fixer-upper, take it from the top ; Handy Man on Call| peter hotton

The Boston Globe (Boston, MA) May 3, 2009 | FLORA APHANAS I am buying a family house in Cambridge. A two-decker from the 1920s, it needs a new roof, has had ice dams and leaks in the attic, chimney bricks are falling off, gutters are rotting, the attic has never been insulated, and we had a bat in December. Where can I start?

Cambridge Sounds like my house 45 years ago. If I knew what I was in for, I would have jumped the deposit and gotten out of there. I figured it would take me three months to fix. Nine years later . . . But it all worked out.

If you can afford it, hire a renovation contractor, who will schedule the work and is delighted to have a challenge. The other way is to hire your own contractors according to the job. Start at the top; have a new roof installed before it gets worse. Then consider things you can do yourself, such as laying insulation on the attic floor, which is the highest priority for insulation. As for insulation in the walls, that should be done by a professional. You can take down those old gutters, and you might be able to wait a while before considering new ones. The roofer might offer to do gutters and rebuild the chimney, or hire it out. ammoniaandbleachnow.net ammonia and bleach

If you have not had any bats since December, treatment is a low priority. But any decayed eaves, where there are holes for bats and other critters to enter, should be fixed as quickly as possible. They are the next priority after the roof. Eventually, if we live long enough, the house, even a two-decker, will be a showpiece.

My running water comes out cloudy and gray. What is happening and is it hazardous to our health?

Worry no longer. It is harmless. It is bubbles in the water, thousands of them, most common, but not limited to hot water. To determine if this is all true, fill a glass with the water and let it stand for a minute or so. It will clear.

I have a chip in my plastered wall, 1 1/2 inches long and 1/2 inch deep. I tried sanding it, but the edges still show. What can I fill it with that will not show?

Sudbury Good old joint compound to the rescue. This stuff is the same thing used to fill nail heads and taped joint seams in dry wall. It is ready mixed. Fill the chip, smooth off, and let set, sand smooth. Paint with the same paint you used on the wall. It will never show.

Just a month ago, I developed a green stain on my 20-year-old wall-to-wall carpet. What in the world is it, and how can I clean it off?

East Boston I think it’s algae, a form of one-celled seaweed. Use Bayer Moss & Algae Killer. It’s a potassium soap of fatty acids, sold at Lowe’s. I got that from Michael Good of Brookline. Bleach usually takes care of it, but can damage the carpet unless it is a very weak solution. Another thing to try is Oxi-Clean, an oxygen bleach, or one of the new carpet spot cleaners, but best is to scrub with detergent and water, and rinsing. Ammonia can work, but only if you have not put bleach on the carpet. Any mix of ammonia and bleach is deadly. here ammonia and bleach

In my new kitchen, the range vent does not go outside. Is that wrong?

It is not wrong, but if the kitchen was completely redone, the vent should have been set to blow outside. That would have been the best and easiest time to do it. But it is not a big concern, because many houses do not have exhaust fans, and no apparent harm occurs. If your fan has a filter, change it every six months or so, or if the filter can be washed, every three months.

You do not have to turn it on at every cooking time, only if you accidentally create a lot smoke. So if there is no fire, turn on the fan and open a window or two. The smoke will clear the room, and the house, in minutes.

Two questions from owners of Trex composite decks, which have developed black marks, and what to do about them.

Many people seem to think that materials other than wood will be resistant to mold (black marks and tiny black dots). Sorry about that, there are very few materials that are resistant to mold. Anything light in color, shiny, and hard will resist mold. Those materials include stainless steel and glazed ceramic tile. If a paint is light enough, shiny enough, and hard enough, it will resist mold. Why light color? A light color will not absorb as much heat and will not stay wet for very long and will cause less condensation of water, which mold thrives on.

The cure is bleach and water. There is a new product on the market called Moldex, which is supposed to kill mold, and maybe it does, but when I went to buy some to see if and how it would work, it cost $7 a pint, which is way too much if you have a lot of mold. So I didn’t buy. it.

Handyman on Call also appears in G on Thursdays. Peter Hotton is available 1 to 6 p.m. Tuesdays to answer questions on house repair; call 617-929-2930. Hotton chats online about house matters 2 to 3 p.m. Thursdays, at www.boston.com. Hotton can be reached at photton@globe.com.

This entry was posted on Monday, November 5th, 2007 at 3:19 pm and is filed under Art News. You can follow any responses to this entry through the RSS 2.0 feed. You can leave a response, or trackback from your own site.