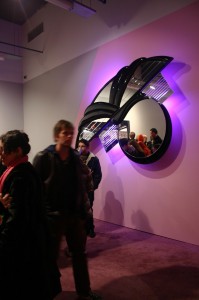 via for Art Observed

Luis Gispert debuted sister shows last night; one featuring a film called “Smother” at Mary Boone Gallery. The accompanying show opened down the street at Zach Feuer and is aptly titled El Mundo Es Tuyo (the world is yours). Although Gispert is no art world newbie (a photograph of his was featured in the 2002 Whitney Biennial, purchased by the Whitney, and then used in a Whitney advertising campaign), this is his first gallery solo show to date. He is known for his obsessively orchestrated photographs that, as his gallery explains, “explore the tension between auspicious wealth and cultural naivete.”

Waylon starts the film, clutching a childlike, construction paper boombox to his chest whilst peeing in an empty kiddie pool. He wakes up from this dream and we are introduced to his mother, as over the top as her pink velvet and lacquer boudoir – as she says good morning to her son, her threats of castration woven with maternal affections are deeply frightening. She tells him he must hold it until 4 pm or else, snip snip! Waylon escapes the house through a secret passageway, first taking time to put the finishing touches on his cardboard backpack boombox.

The boombox emerges as the central symbol, an object that Gispert has fetishistically used in his work. Creeping through a dead garden of plastic flamingos, Waylon gets on his bike for a little adventure. Passing a sound system rolling on a truck bed guarded by a solemn Rasta, he finds his way to a slaughterhouse, appearing somewhat bored, he walks between pig pens into the gray building. Inside, there is a gruesome scene of a pig being butchered by Carl, the villain, with tattoos up the inside of his wrists and dripping in blood, he confronts Waylon.

Waylon runs outside, only to find his bike stolen. As he reaches into his pocket for a quarter that his mother has given him, Carl drives up in a red muscle car, destroying the paper boombox and offering him a ride home. Waylon concedes in an act that defies all lessons of stranger danger. As Carl ogles a photo of Waylon’s mother we learn that his intent in delivering the boy home is directly related to his unabashed male sex drive.

Waylon escapes the car to get home, making it to 4 pm. As the clock strikes 4 and he proudly pronounces his feat of endurance to his mother in the kitchen preparing butterball turkeys, a stream of urine makes its way down his leg to the floor. His mother scolds him and Waylon is a German shepherd, reduced to an animal, unable to speak. The ending that follows pits Carl as both perverted sleazeball, dog killer and as liberator of Waylon from his mother’s twisted love.

Throughout the piece, all symbols are similarly layered, a psychoanalytic hand is forced to overturn each mystery in the story. Gispert has again created a work that is stylistically perfect, each object carefully chosen to fit into a fantasized schema of some nether world comprised of saturated color, 80s opulence, bling, kitsch and razor sharp compositional structures.

[youtube]http://youtube.com/watch?v=q-fytyPT0Qo[/youtube]
“Smother” Trailer via You Tube 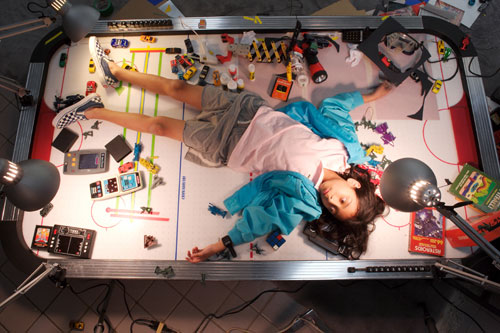 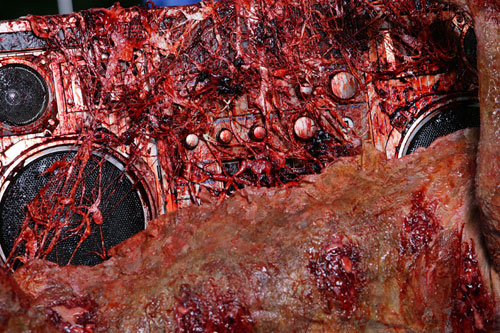 The show at Feuer takes objects derived from the film and posits them with large photographs of military desert scenes seen through the windshield of an ornate truck interior. Speakers in the shapes of hearts pump music from the film, composed by Phoenecia, a Miami based bass experimentalist duo. A large mirror and lacquer wall piece evokes a gnawing awkward fear inspired by Waylon’s mother in the film. In the back room, the corpse of the German shepherd serves as a base to some sort of coffee table. While these objects are intriguing sculptures on their own, the film’s potency makes them seem souvenir-like and almost unnecessary except for their saleable value. However, Gispert has lifted these objects from the narrative arc and forces us to examine them in tangible form. In tandem, these sibling shows are not to be missed. 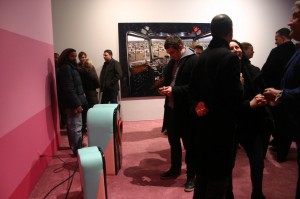 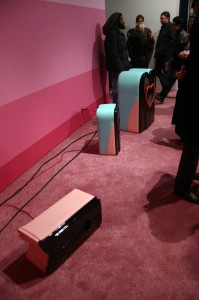 Coverage for AO by Hikari@artobserved.com

This entry was posted on Friday, January 18th, 2008 at 10:27 am and is filed under Art News. You can follow any responses to this entry through the RSS 2.0 feed. You can leave a response, or trackback from your own site.

2 Responses to “AO On Site: Luis Gispert Opens Two Shows in One Night”