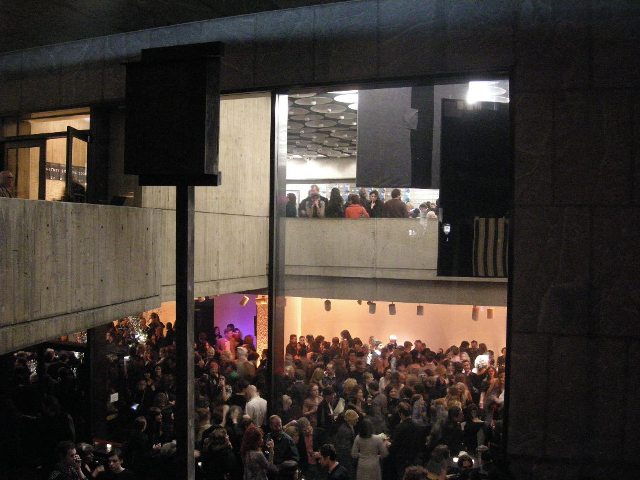 Opening of the Whitney Biennial

The 2008 Whitney Biennial opened last night to throngs of people. It was curated this year by Shamim Momin and Henriette Huldisch and reverted back to the Biennial’s original mission to create a time capsule out of a far reaching art world that, as Adam Weinberg says, “… is, essentially, out of control.” 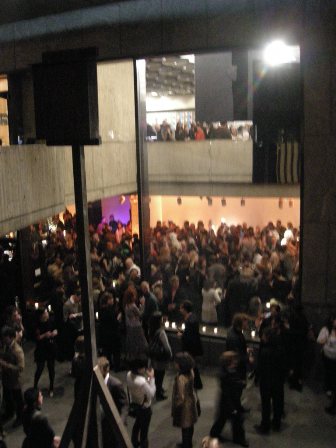 Unlike the last Biennial’s strong curatorial sway of Chrissie Iles and Phillipe Vergne that invited each individual artist to participate in a larger, overarching thesis, this Biennial went back to the cross-section model. However, if you imagine the art world as an ever-morphing, writhing beast, Momin and Huldisch have sliced through it revealing body parts acting individually, some of which we didn’t know existed. I arrived right at 7 pm when doors opened, hoping to avoid the crowds. We traipsed up to the fourth floor where a large Heather Rowe sculpture entitled “Something Crossed the Mind” fragmented bits of my face and reflected it back. In a mass of people these unexpected glimpses of my own face on shards of mirror were shocking. Her piece is made of wood, and looks just like the inner structure of a wall, naked without the drywall. Into these plywood beams she has cut sharply pointed pieces of mirror which catch passing glances and throw them back at viewers like pointed confrontations. Unlike several other pieces that were obscured by the hordes of people passing through the galleries, Rowe’s work became more effective and surprising with the large crowd. Rounding the corner, Zach Feuer smiled smugly, watching carefully as visitors explored artist Phoebe Washburn’s large environmental installation titled “While enhancing a diminishing day down thirst, the juice broke loose (the birth of a soda shop).” This piece features low-quality materials deployed in a mad scientist arrangement, with bubbling plastic tubing, and flowers blooming out of the top. Clearly, a form of waste water was being processed into some sort of garden. Gatorade was also involved. Hints at industry, production and waste could all be united under the epithet “recycle!” In one of the video caverns off to the side, Edgar Arceneaux has constructed an equally ambitious installation titled “The Alchemy of Comedy…Stupid”, using his technological prowess to create an extremely complex video installation comprised of nine channels. Five flat screens, perched on the floor, played five different perspectives of five different comedic performances. A large backdrop of David Alan Grier looking frankly into the camera was offset by a three channel triangular projection to the right. Arceneaux has balanced complex spatial geometry between the “screens,” with the space of recorded performative actions happening within the frame.

Edgar Arceneaux’s video, The Alchemy of Comedy. . . Stupid via e-fux

I surged down the stairs, carried along by the seething crowd, crossing paths with the ubiquitous art event goers, Arden Wohl in purple tights followed by Todd Eberle snapping shots (why is he allowed to photograph?). At this point, rumors floated through the stairwell that there was not only a line to the bar but a long queue to get onto the floor with the bar.

On the third floor, a man in a velour pantsuit was trying to shimmy under the Carol Bove piece comprised of hundreds of bronze rods dangling from a metal wire grid affixed to the ceiling, entitled “The Night Sky over New York, Oct. 21 2007.” This man was apparently trying to get a view of the constellations that might be visible if only one saw the points of the bronze rods emerging through space.

The artist collective The New Humans occupied another chamber. Their rotating venetian-blind-esque mirrored panels were visually pleasing. But the usual thrumming sound performance that goes with them was substituted by a wobbly video of a performance projected on a corner wall; not the same effect. If you can, try and catch a live performance at Elizabeth Dee Gallery.

Walead Beshty and Roe Etheridge occupied a nice space back to back, both showing photography. Etheridge’s photographs as individual images are conceptually confusing, (the exhibition catalogue writes, “Roe Etheridge arranges his large-format photographs into series whose precise meaning remains elusive”). Glossy studio shots are hung alongside a tightly cropped landscape with no horizon, but it is clear that each shot features a heightened, almost neurotic, level of intentionality. At first glance the grouping seems disparate, clues strung together with thread that only the artist possesses. However, letting go of 1 to 1(“this means that”) rationality, a murky theme starts floating to the forefront of the mind that may inform the work enough to be satisfied and move on — or it might just be enough to start another round of head-scratching.

Beshty’s photography clearer conceptually but visually, more grainy and obscure. His images are faded color washes with ghosts of architectural rubble and broken window frames. A placard on the wall provides the conceptual thread we couldn’t quite wrap around our fingers with Roe, stating the political and social nature of Beshty’s work. In this series, he has photographed the defunct Iraqi Diplomatic Mission in the former East Berlin; layers of emptiness and awkward political non-identity soar against the backdrop of historical tragedy and political evolution. As he passed through the airport (another “zone of radical indeterminacy”) the security X-ray machines added the spontaneous touch of tinting his negatives.

Walead Beshty through the Wallspace Gallery

Surprisingly, I spent the most time with one artist engrossed in a narrative video piece, a not- to- miss Omer Fast (which was also screened this past summer in Basel at ArtUnlimited). There are two screens with projections on both sides. On one side, a dual channel live action interview going on between a director and young American man, stocky with a healthy sense of humor. The director is doing some sort of piece exploring memory and perception, perhaps for a scientific television program. The interviewee recounts an experience in Germany during study abroad and his experience as a soldier where he unintentionally kills an unarmed boy. On the other side of the screens are projected another two channels of actors enacting the scenes of memory. The actors are frozen, like slices in time, while real time flows around them; their faces frozen in emotive expressions while their hair blows in the wind or snow falls around them. The piece garnered a lot of praise in Basel this summer. Still from Edgar Omer’s The Casting  via artnet

Painting has given less attention than installation, video and sculpture in recent Biennials, long- time friends (and painters) Kristin Baker and Torben Giehler were quick to point out when I asked if they had work in the show. However, Rita Ackermann’s layered, painted, drawn, collage assemblages, have the effect of a beautiful insect squashed between Plexi-glass and becoming a Rorschach of quixotic compositions of femininity, youth and downtown detritus. Is this the new form of painting, a large carved heart-shaped piece of Plexi left carelessly on the floor that women in four inch heels kept tripping over as they moved on to the next piece?

Cheney Thompson was the only artist who addressed the platform from which all of this prestige, glitter and glamour was being served to the public – the institution of the Whitney Museum itself. Thompson did so succinctly and underhandedly with a large monolith in formica blue – a perfect imitation of typical museum signage. Behind the sign, the austere blue structure became a platform, where a small household rotating fan absurdly pushed the air around opening goers, many of whom mistook the piece as informative Whitney insignia.

We headed downstairs for another drink, at this point the rumors were proven true. We had, as a group, outgrown the Whitney. All doorways were clogged with art afficianados and the bar was not to be reached. The last Biennial in 2006, was described by art critic Jerry Saltz as self-referential, art about art, “it is the art world meeting around fires, taking stock, and trying to work things out.” This Biennial opening was all about introducing us to artists we might not have heard of in a massive crowd of people who don’t know each other.

This entry was posted on Saturday, March 8th, 2008 at 10:49 pm and is filed under Art News. You can follow any responses to this entry through the RSS 2.0 feed. You can leave a response, or trackback from your own site.