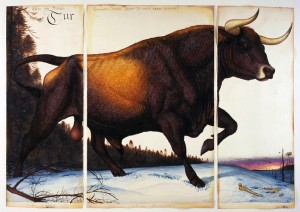 From May 8 to July 3, the Paul Kasmin gallery presents the works of New York born artist Walton Ford.  Ford works on large scale watercolors and his subject matter is mostly animals.  Though his work depicts animals almost scientifically, there are underlying themes such as colonialism, the impact of slavery, forms of political oppression, and present day social and environmental issues.  Hidden within the animal portraits are interwoven clues, jokes and folktales. 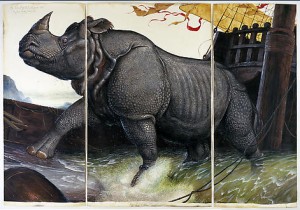 Ford, a graduate of the Rhode Island School of Design, started out intending to be a filmmaker, but storytelling is still reflected in his works.  Ford draws on old prints for reference for his animal portraits.  His piece Malmaison, which has two game birds who are fighting, is an allegory for the Napoleonic Wars. 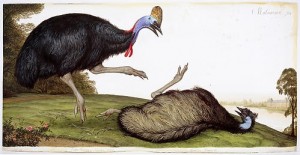 This entry was posted on Thursday, May 29th, 2008 at 6:24 pm and is filed under Go See. You can follow any responses to this entry through the RSS 2.0 feed. You can leave a response, or trackback from your own site.