Robert Rauschenberg has died at age 82 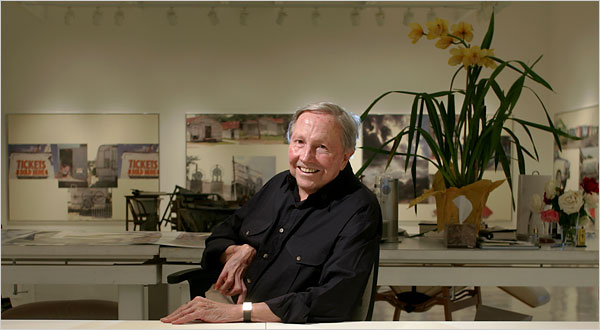 All American Artist, Robert Rauschenberg died from heart failure at his home on Captiva Island, Florida last night. Rauschenberg defied the stereotypical idea that an artist will stick to one medium or style by exploring many different areas of art. Rauschenberg was a painter, photographer, choreographer, printmaker, set designer, onstage performer and in his later years, a composer.

American Artist Dies at 82 [NYT]
Will Rauschenberg’s Death Create Frenzy at Christie’s Tonight? [New York Entertainment]
RIP Robert Rauschenberg [ArtReview]
Alchemist of the Mundane [Washington Post]
Rauschenberg Got a Lot From the City and Left a Lot Behind [NY Times]

Rauschenberg emerged in the a 1950s and was a dominant figure in pushing American art onward from Abstract Expressionism. His work captured the optimism and openess to new ideas that the Great Depression Era desperately seeked. Jasper Johns once said that no American artist invented more than Mr. Rauschenberg.

He was also a philanthropist, donating millions to organizations for women, children, other artists, medical research and Democratic politicians. Rauschenberg was quoted as saying “Anything you do will be an abuse of somebody else’s aesthetics. I think you’re born an artist or not. I couldn’t have learned it. And I hope I never do because knowing more only encourages your limitations.” 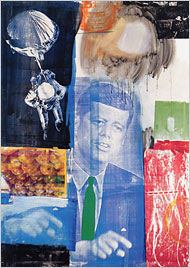 This entry was posted on Wednesday, May 14th, 2008 at 4:20 pm and is filed under Art News. You can follow any responses to this entry through the RSS 2.0 feed. You can leave a response, or trackback from your own site.