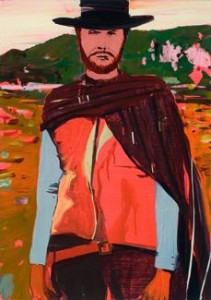 Galerie Thaddaeus Ropac in Paris will host from June 11 until July 26 , the first solo exhibition of Jules de Balincourt. The french artist now lives and works in Brooklyn.

Gettin to no France by Jules de Balincourt via Thaddaeus Ropac

Balincourt has obviously been influenced by American culture, and in his works he often describes social, political and economic landscapes of the United States.  In some of his other works there are other noticeable themes such as wanderlust, exotic and tropical beaches, or even the image of Clint Eastwood as a cowboy in a Western movie.

In all Balincourt works, we find the same characteristic aesthetic themes of powerful colors, often depicting urban or social scenarios.

Jules de Balincourt was born in 1972 in Paris and moved to the United States in the early 1980s. He obtained his BFA in 1998 from the California College of Arts in San Francisco, and moved to the East coast and graduated from Hunter College in 2004 with Masters degree in Fine Arts.

“I believe my experience in making cultural observations of sorts comes from having always felt like an outsider…immigrating to America had a big impact on me.  I suddenly saw America through the lenses of a young French boy, and the first question I asked my mother upon my arrival was, ʻWhere are all the cowboys and Indians?'” via Artnet

This entry was posted on Friday, June 13th, 2008 at 5:59 pm and is filed under Go See. You can follow any responses to this entry through the RSS 2.0 feed. You can leave a response, or trackback from your own site.