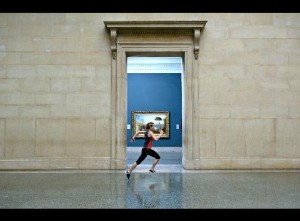 Running in the Tate via Bloomberg

Head’s up to visitors of the Tate Britain: from now until November 16, every thirty seconds from 10am – 6pm, an athlete will make a fast 85 meter dash from one end of Duveen Hall to the other. While running is not normally encouraged at the Tate, this particular athletic display is actually a commissioned artwork entitled Work No. 850 by British artist Martin Creed. Creed has instructed the runners, who he recruited from athletic magazines and are being paid an hourly wage, to “run like their life depended on it.” The artwork is part of an ongoing series of commissioned contemporary sculpture in the Duveen Galleries of Tate Britain, sponsored by Sotheby’s. 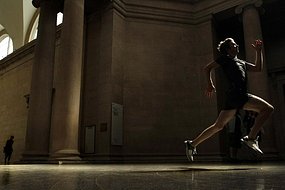 Runner in action via abc.net

Creed said that he got the idea following a visit to the catacombs in Italy, when he had only 5 minutes to rush through and see all the art he could. He also eluded to the idea that running is a time when people feel most alive, and that if death is the ultimate stillness, moving as fast as you can is the ultimate experience of life. The runners in Work No. 850 have been instructed to run quickly, but avoid running into the museum’s audience. 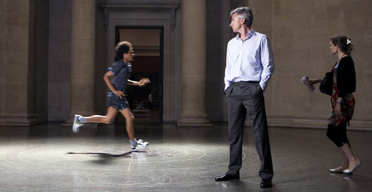 Spectators look on via Guardian UK

Martin Creed, who received the prestigious Turner Prize in 2001 and is perhaps best known for his lights going on and off, often makes work that centers around the human experience. He told Telegraph UK “In the street or in a park, maybe you’ll see someone running, maybe you won’t. Here, it’s easy to look at.”

This entry was posted on Monday, July 14th, 2008 at 2:07 pm and is filed under Art News. You can follow any responses to this entry through the RSS 2.0 feed. You can leave a response, or trackback from your own site.