Home » Francis Bacon to have a retrospective at Tate Britain: September 11 through January 4

Francis Bacon to have a retrospective at Tate Britain: September 11 through January 4

Beginning September 11th, Tate Britain will be hosting an exhibition of the work of Francis Bacon (1909-1992) in anticipation of the artist’s upcoming centenary in 2009.  World-renowned for his figure paintings and studies of the human body, the exhibition will contain works of this nature as well as Bacon’s signature landscapes and animal representations. The Tate display will contain about 60 works which will reflect the development and output of Bacon’s career, which began in 1928 after a brief stint as an interior decorator. Although little of his work survived his proclivity to destroy it prior to his notable achievement of the Three Studies for Figures at the Base of a Crucifixion in 1945, he was fittingly recognized as one of the most significant artists of his generation. Today, he is widely acknowledged as one of the most prominent artists of 20th-century art, with works such as his Triptych, 1976 selling for $86 million at auction, which is a record-breaking figure for a post-war work of art.

Known for his tendency to depict humankind as he interpreted it daily, without censoring potentially alarming or arresting attributes such as violence, lust and fear, Bacon strove to convey his vision whilst incorporating both historical and modern influences. His interpretations of spiritual elements took on their own context in many representations which confront the viewer with images of flesh, decay and brutality whilst at times retaining an implicit tenderness which still manages to surface in his work.

This exhibition will be the third retrospective show of Bacon’s works to be held by the Tate. It will allow for the audience to have unparalleled exposure to his vision and to see how it developed over the course of his career and even after his death with the discovery and exploration of his studio and its contents in its entirety. After London, the exhibition will then go to Museo Nacional del Prado, Madrid from 3 February – 19 April 2009 and then on to the US to the Metropolitan Museum of Art, New York from 18 May – 16 August 2009. 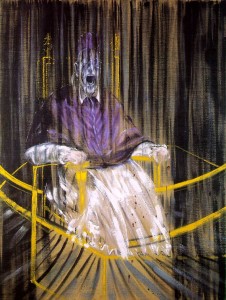 Executed in 1953, this painting is a converted version of the “Portrait of Pope Innocent X” completed by Spanish artist Diego Velazquez in 1650. Bacon was an avid admirer of the Velazquez portrait, and collected reproductions of the image prior to completing this work. The screaming mouth is said to be a depiction of a nurse in Sergei Eisenstein’s film Battleship Potemkin. Often known to combine the imagery and influences of different eras, this piece is a prime example of how effectively Bacon could utilize this skill.

Three Studies for Figures at the Base of a Crucifixion, 1944. Tate Collection.

First exhibited in 1945, this painting caused a sensation and catapulted the artist into the limelight when it was revealed. This was primarily due to the fact that Bacon, a self-proclaimed atheist, had chosen to represent the figures in this crucifixion story as ancient Greek Furies. Their writhing, blindfolded and screaming postures, which are further amplified by the orange background, testify to Bacon’s propensity for pushing the boundaries of what was traditionally thought to be socially acceptable.

Part of a number of triptychs which Bacon painted following the suicide of his lover, George Dyer, in Paris in 1971 this work is a successful attempt by the artist to express his grief and anguish over his loss. The two are rumored to have met when Bacon caught Dyer robbing his apartment in Kensington in 1964.  Bacon had stated that he felt profoundly guilty over the death of Dyer and that this series was an attempt to exorcise these feelings as well as pay tribute to his memory.

This entry was posted on Saturday, August 23rd, 2008 at 2:19 pm and is filed under Art News. You can follow any responses to this entry through the RSS 2.0 feed. You can leave a response, or trackback from your own site.

2 Responses to “Francis Bacon to have a retrospective at Tate Britain: September 11 through January 4”