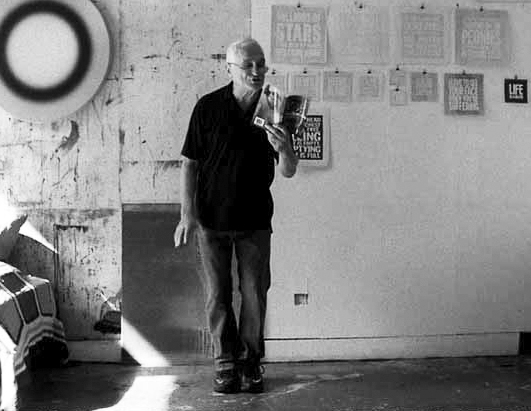 Still from JG Reads, a film by Rirkrit Tiravanija, via Gavin Brown’s  enterprise

John Giorno–poet, musician, performance artist, and collaborator with William S. Burroughs and Andy Warhol–is the protagonist of a film by Rirkrit Tiravanija, currently showing at Gavin Brown’s enterprise.  Giorno, who was the subject of Warhol’s first film (Sleep, 1963), is considered a fixture of the New York creative community.  His studio was an experimentation hub for the likes of Robert Rauschenberg, Roy Lichtenstein, John Cage, and other groundbreaking postwar artists.  The film, which runs for 10 hours, incorporates five decades of John Giorno’s music, poetry, and memoirs from a very interesting life, aiming to capture what the gallery’s press release refers to as a “New York that now exists only as an idea.”

This entry was posted on Monday, December 15th, 2008 at 7:03 am and is filed under Go See. You can follow any responses to this entry through the RSS 2.0 feed. You can leave a response, or trackback from your own site.

One Response to “Don’t Miss: JG Reads, a film by Rirkrit Tiravanija, at Gavin Brown’s Enterprise, New York, through December 20, 2008”