Go See: Cy Twombly: 'The Rose' at Gagosian Gallery, London through May 9th, 2009

The Rose (2008) by Cy Twombly, via Gagosian Gallery

Currently on display at Gagosian’s Britannia Street Gallery in London are five new monumental paintings by American artist Cy Twombly.  Each painting depicts four wood panels with three vibrantly colored roses in full bloom.  The colors of the roses range from deep burgundy to bright orange, violet, crimson, and gold against a turquoise background.  Stanzas from “Les Roses” by German poet Rainer Maria Rilke are inscribed on the last panel of each painting. The poems inspired this series of works and tell of the artist’s characteristic coupling of painting and poetry.

Twombly allows the paint to drip and flow down each panel as if to capture the inevitable interaction between the paint and the effects of gravity. The use of bold and vibrant colors within a natural setting while referring to poetic quotations is characteristic of some of Twombly’s earlier works. For example, Analysis of the Rose as Sentimental Despair (1985), now in The Menil Collection in Houston, cites quotations by Rilke, Rumi, and Giacomo Leopardi as well as incorporates depictions of the natural world evoking the inevitable rhythms of death and rebirth. 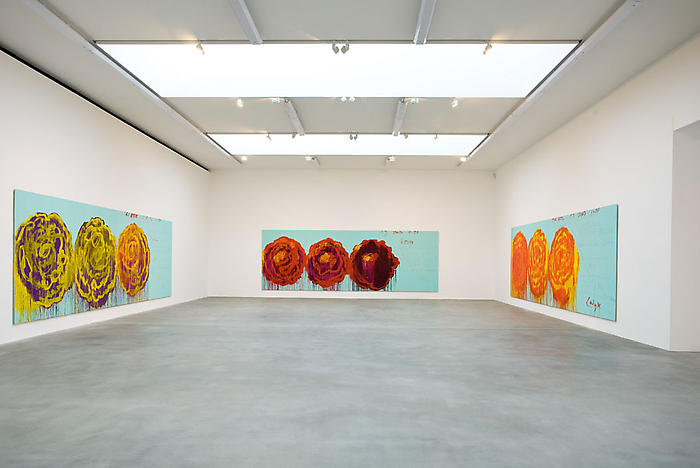 Born in 1928 in Lexington, VA, Cy Twombly has exhibited his work extensively since the mid-1960s. His most recent exhibitions include a retrospective at the Tate Modern similar to one currently on view at the Guggenheim Museum in Bilbao that will travel to the Galleria Nazionale d’Arte Moderna in Rome later this year.  Another exhibit of Twombly’s recent works will inaugurate the new building of The Art Institute of Chicago in May 2009. 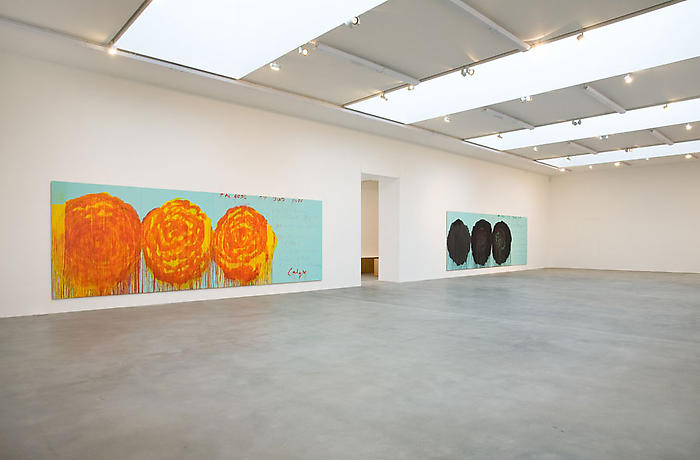 It’s official. The next president of the United States will be the incumbent, Barack Obama, according to students participating in Western Illinois University’s Mock Presidential Election (MPE). And in a surprise move for vice president, students voted Joe Biden out and Secretary of State Hillary Rodham Clinton in.

Stein, who made it a three-candidate race in the national electorate, kicked-off her actual presidential campaign as a Green Party candidate at the Nov. 7 simulation, addressed the students gathered in Western Hall saying the spirit of democracy was alive and well at Western Illinois University. She challenged students to think of this campaign as a chance to speak up and to vote on their own behalf.

WIU student campaign managers and other leaders in the Democrat and GOP ranks, spoke on behalf of their presidential nominees.

When it came down to states voting, several states deadlocked, and without a declared winner, their electoral votes could not be allowed, said Rick Hardy, MPE executive co-director.

Accolades “We would like to thank all of the participants, students, faculty, staff, volunteers and candidates and their spokespersons, for taking part in the 2011 Mock Presidential Election. The collaborative partnerships are what makes an event of this magnitude such a success,” said WIU President Jack Thomas. “Coordinators Rick Hardy and John Hemingway and our students are to be commended for their initiative and hard work in planning, coordinating and organizing this largest student-run mock election event in the nation.” Hardy added his appreciation for the students who made this event a success. here 2012 presidential election

The American Democracy Project is an initiative of the American Association of State Colleges and Universities (AASCU) that began in 2003, in partnership with The New York Times, focused on higher education’s role in preparing the next generation of informed, engaged citizens for the our democracy, Hardy added. 2012presidentialelectionnow.net 2012 presidential election

Students in the Spotlight Hardy was quick to acknowledge the many students who worked the mock election, many of whom assisted in ways related directly to their academic fields.

“Broadcasting students reported each night’s event live on wiutv3, journalism students wrote editorials and news copy (control–shift.blogspot.com), the ROTC Color Guard started each session with the presentation of the colors, School of Music singers and the Marching Band participated and many more behind-the-scene students, including recreation, park and tourism administration students who helped with event management, along with academic and honorary organizations, help made this year’s Mock Presidential Election an overwhelming success,” said Hardy. “I know there will be a lot more Western Illinois University students following the 2012 Presidential Election, all the way from state primaries and caucuses to election night coverage; and I believe there will be a lot more WIU students voting in this election.” Advice from the Field Congressman Aaron Schock (Peoria), who, at 30, is the youngest member of the United States Congress, spoke to the students about his journey in politics, beginning as a successful write-in candidate for school board at 19-years old. He was the youngest member elected as an Illinois State Representative in 2004, and the first member of the U.

Shock told the students that serving on the school board, or in the state general assembly, or in Congress, “is a lot like high school. If you show up, do your homework, ask intelligent questions, put forward thoughtful ideas and effort, you will be successful.” Politicians Supported MPE Throughout the five-day Mock Presidential Election, several noted politicians and spokespersons of politicians took the time to come to Macomb to speak to the students simulating America’s election process.

S. Rep. John Shimkus; Farheen Hakeem, National Green Party co-chair; and Collin Hitt, senior director of government affairs at the Illinois Policy Institute in Springfield. For any query with respect to this article or any other content requirement, please contact Editor at htsyndication@hindustantimes.com

This entry was posted on Wednesday, March 4th, 2009 at 9:19 pm and is filed under Go See. You can follow any responses to this entry through the RSS 2.0 feed. You can leave a response, or trackback from your own site.