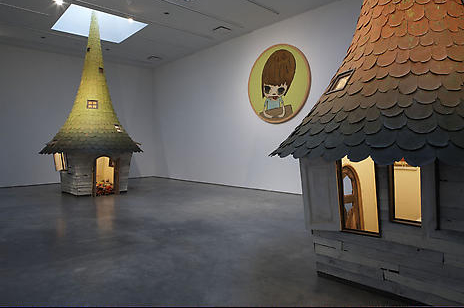 For Yoshitomo Nara’s fourth solo show at Marianne Boesky Gallery, the Japanese pop artist pairs new paintings and drawings with two large-scale sculptures.  Created with his collaborative group YNG – formally known as “Yoshitomo Nara + graf – the two stylized pine tree abodes are made of reclaimed wood and recall the feeling of a woodman’s cottage or some surreal abode.  The interiors are filled with sketches and doodles created in the artist’s hand, along with stuffed animals that match the playful, fairy-tale feeling of Nara’s work.

Yoshitomo Nara may be more well-known for his doe-eyed cartoon girls than for delinquent behavior, but he’s received a storm of publicity in New York this week for his arrest on charges of “resisting arrest, making graffiti, criminal mischief, possession of graffiti tools and damaging property” for drawing a smiley face on the wall of the Union Square L stop.  (Perhaps he’s been hanging around Nate Lowman?)  According to Art in America, the artist subsisted on peanut butter sandwiches and milk for two days in the city jail, “which he optimistically described as ‘a nice experience in my life,’ saying it was ‘like in the movies,’ a small space filled with all manner of people he would not otherwise meet.”

Street graffiti by Yoshitomo Nara, courtesy of The Art Collectors. 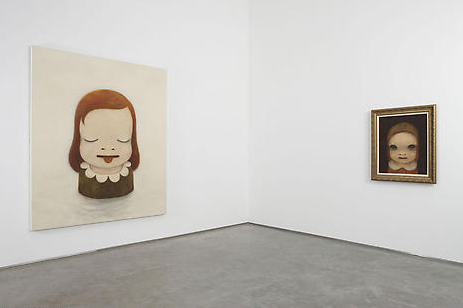 Installation view of Yoshitomo Nara’s “Not Everything But/Green House” (2009) at Marianne Boesky, via Arrested Motion. 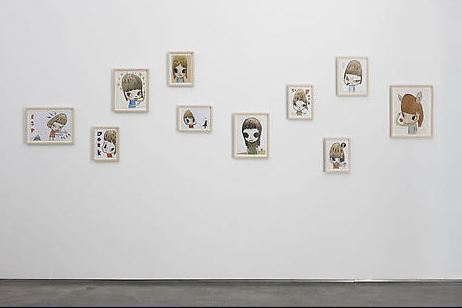 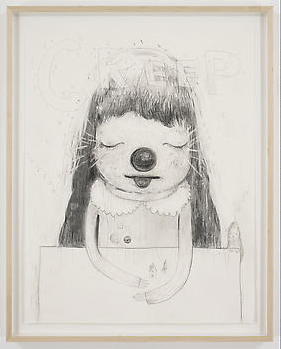 Yoshitomo Nara “Creep” (2009) at Marianne Boesky, courtesy of the gallery. “Not Everything But / Orange House” (2009) by Yoshitomo Nara at Marianne Boesky, via Arrested Motion. Interior of “Not Everything But / Orange House” (2009) by Yoshitomo Nara at Marianne Boesky, via Arrested Motion. Interior of “Not Everything But / Orange House” (2009) by Yoshitomo Nara at Marianne Boesky, via Arrested Motion.

COCAINE TRAFFICKER SENTENCED TO 30 MONTHS IN FEDERAL PRISON MORE THAN 1.2 KILOS OF COCAINE, $17,200 IN CASH AND TWO VEHICLES SEIZED.

States News Service October 7, 2011 PROVIDENCE, RI — The following information was released by the United States Attorney’s Office for the District of Rhode Island: here 2000 honda accord

According to information presented to the Court, during the spring and summer of 2010 Providence Police detectives developed information on a significant cocaine trafficking operation run by Rosario and a co-defendant, Felix Williams Arnod Suriel, a/k/a Hendrick Rivera Bruno. During the investigation, detectives learned that the defendants were expecting a large shipment of cocaine on September 2. Throughout the day the defendants’ movements were monitored and by early evening both men were detained, searched and arrested.

In addition, investigators executed several search warrants on September 2, searching three Providence residences and a vehicle. More than 1.2 kilograms of cocaine, more than $17,200 in cash, a semi-automatic pistol and various items used in the preparation, packaging and sale of cocaine were seized. website 2000 honda accord

Rosario and Suriel have been detained since their arrest.

Felix Williams Arnod Suriel, a/k/a Hendrick Rivera Bruno, pled guilty in federal court on June 3, 2011, to conspiracy and possessing cocaine with the intent to distribute. He is scheduled to be sentenced on November 21, 2011.

The case is being prosecuted by Assistant U.S. Attorney Gerard B. Sullivan. The Bureau of Alcohol, Tobacco, Firearms and Explosives (ATF) assisted Providence Police in the investigation of this matter.

This entry was posted on Friday, March 13th, 2009 at 5:36 pm and is filed under Go See. You can follow any responses to this entry through the RSS 2.0 feed. You can leave a response, or trackback from your own site.