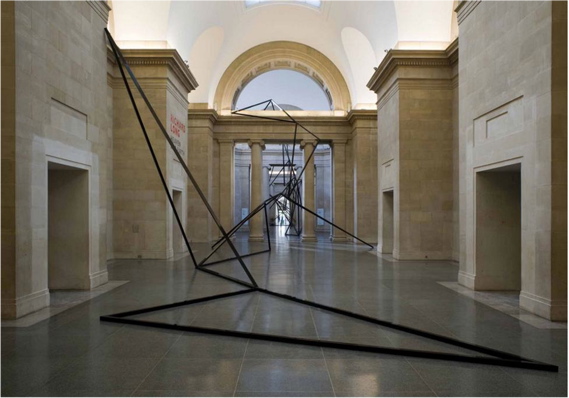 The Duveen Comission series presents a hitherto relatively unknown artist, Eva Rothschild, at the Tate Britain.  The exhibition consists of just one work, which fills the 70-meter space.  Accordingly, the piece explores volume and space, as it (per Tate) “fills and disrupts the grandeur of these neoclassical galleries with a chaotic, energetic presence.”  Says the artist, “I’m hoping to create something that will agitate the architecture of the Duveens Galleries, tangling with your perception of the space.”

Eva Rothschild at Tate Britian, via The Guardian.

“Cold Corners” is constructed of 1.8 tons of aluminum box tubing, shaped into triangles that run the length of the gallery.  Viewers immediately find themselves inside the sculpture, interacting with the “scribble in space” which curator Katharine Stout has called Rothschild’s work.  (Though the interactive art didn’t go so far as to allow a pair of disappointed schoolboys to swing from the exhibit.)  This is the first time that Dublin-born Rothschild, who studied at Goldsmiths and has shown at The New Museum New York, Tate Triennial, and more, is presenting a work of such great size. Says Tate Britain director Stephen Deuchar, “we just thought it would be fun to see whether her small-scale work would translate on to a larger stage.” 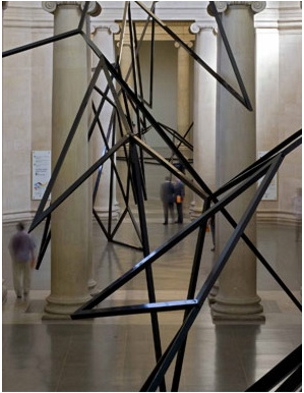 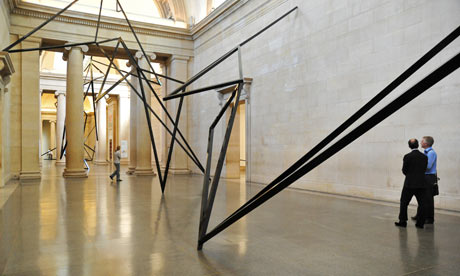 Eva Rothschild at Tate Britain, via the Guardian.

Duveens Commission became an annual show at Tate Britain after it gained sponsorship from Sotheby’s.  The first, in 2000, had Mona Hatoum creating a huge kitchen appliance.  Other artists it has presented include Anya Gallaaccio, Michael Landy, Mark Wallinger, and Martin Creed, the last of which had a stream of people run as fast as possible through the gallery in a work titled “Work No 850.”  With the newest Commission, comments Sotheby’s Bill Ruprecht, the annual event continues to “provide this important showcase for new work by British contemporary artists. Support for the broader cultural community is more important than ever.”

This entry was posted on Saturday, July 4th, 2009 at 7:14 am and is filed under Go See. You can follow any responses to this entry through the RSS 2.0 feed. You can leave a response, or trackback from your own site.