Go see – Boston: ‘Damian Ortega: Do It Yourself’ at the Institute of Contemporary Art through Jan 18, 2010

On view now until January 18, 2010, the Institute of Contemporary Art is hosting the first-ever survey of Mexican artist Damian Ortega’s work. The exhibition will include selections of Ortega’s sculptures, installations, photographs, and videos with a focus on the breadth of his artistic output over time. 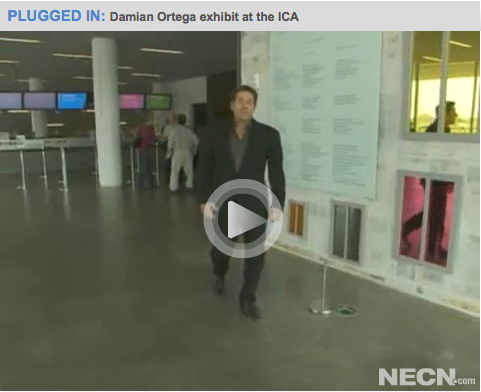 Ortega’s work is known for its movement, rearrangement, and mid-air suspensions. The Institute of Contemporary Art describes Ortega’s art as “calling attention to the dynamism of the world around us and the hidden poetry in the everyday.” Using unexpected and oftentimes unpredictable materials like Coca-Cola bottles, tortillas, bricks, antique tools, and even a Volkswagen Beetle, Ortega takes extreme pains to showcase his artwork in a playful, expressive, and imaginative way.

Damian Ortega was born in 1967 in Mexico City. He is widely considered to be one of today’s leading Mexican artists. From studying with fellow artist Gabriel Orozco in the late 1980s, Ortega began to focus specifically on form and shape in photography and sculpture. Ortega’s work can be found worldwide in a wide range of public and private collections. Ortega currently works and lives in Berlin and Mexico City.

This entry was posted on Wednesday, October 21st, 2009 at 1:34 pm and is filed under Go See. You can follow any responses to this entry through the RSS 2.0 feed. You can leave a response, or trackback from your own site.