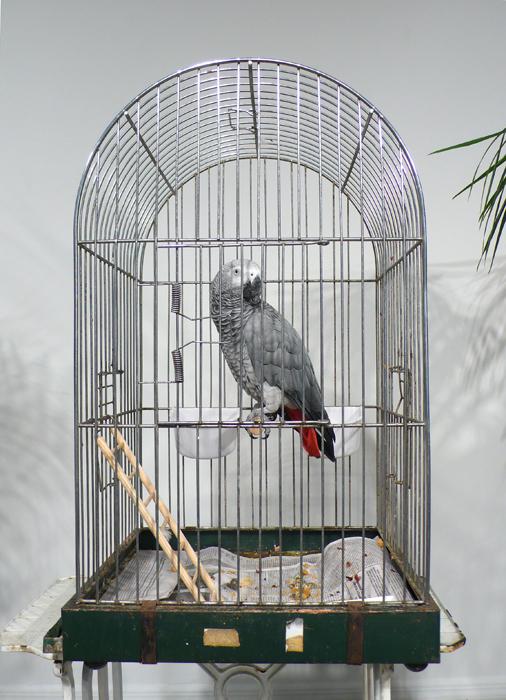 Bringing attention to the theme of repetition– a detail of view of the caged parrot, part of Broodthaers’s minimal and highly conceptual installation.(2009) Via Peter Freeman.

Currently showing at Peter Freeman, Inc. in New York is an exhibition of Marcel Broodthaers’s installation entitled “Ne dites pas que je ne l’ai pas dit – Le Perroquet” (Don’t Say I Didn’t Say So – The Parrot”.) The show marks the first time that Broodthaer’s installation has been exhibited in the United States. The show, in its entirety, consists of two palm trees, an African gray Parrot, a glass case displaying Broodthaers’ catalogue from his 1966 exhibition at the Wide White Space gallery in Antwerp (along with a reprint from 1974), and a recording of the artist himself, reciting one of his poems: “Moi Je dis Je Moi Je dis Je…”. Broodthaers formed the concept for the 1974 installation as a kind of symbolic setting in which the booklet for his solo exhibit at Antwerp’s Wide White Space Gallery could later be presented.

more images, story and links after the jump…

Visually, the installation itself is minimal. A live African gray parrot sits inside of a cage, in between two palm trees. Across the way, a recording plays Broodthaers reciting his poem– a version of which is also in the encased catalogue. The poem conveys the artist’s interest in (re)presenting his past, including his own work as a poet and writer. While the show is visually sparse, the minimalism is counteracted with an invisible web of narrative connections that bring the objects together. During Broodthaers final years he completed a series of retrospective installations known as the “Decors,” (meaning interior design, or film set, in french) all of which explored ideas of repetition and artificiality while also dealing with objects, text, history, museology and identity. He was particularly interested in the relationship between languages and sign, often finding Belgian bilingualism  as a source of inspiration. The inclusion of a parrot–being a tropical bird known for repeating itself and the words of others, along with the showcasing of a catalogue from a previous exhibition, works to emphasize and bring attention to the idea of a retrospective as repetition in “Ne Dites pas que je ne l’ai pas dit- Le Parroquet.” 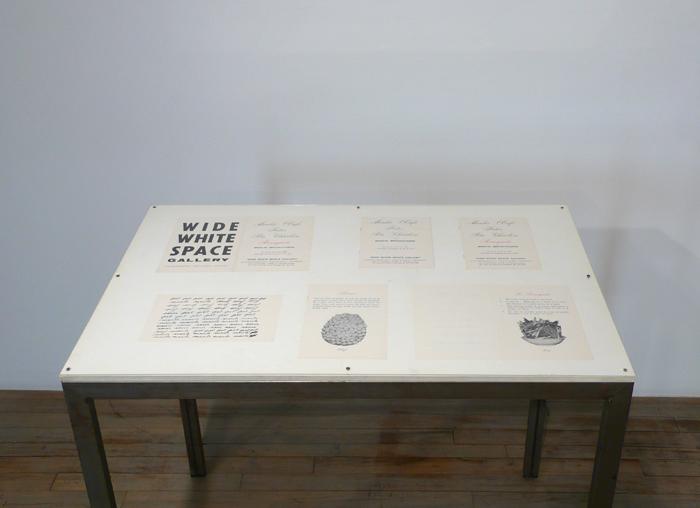 An image of Broodthaers’s glass vitrine containing a catalogue from a former exhibition in 1966, which was held at the Wide White Space Gallery in Antwerp. (2009) Via Peter Freeman, Inc.

Often using palm trees, old prints, and nineteenth-century furniture, Broodthaers’s installations were designed to mock the retrospective as a kind of form, or stage, “reducing the artist’s production to a trite arrangement.” This exhibition, which stands as the most “compact” of the various installations and retrospectives that occupied the artist in his final years, focuses on this central theme– artwork as “scenography.” The constraints and limits upon a retrospective when subjugated to being an “exhibition” are explored, and in effect, questions are raised about the role of institutions that protect and promote the art. Additionally, the ways in which context affects the meaning of an object is examined. The artist is sometimes credited for having brought about the category of Conceptualism known as “institutional critique.” 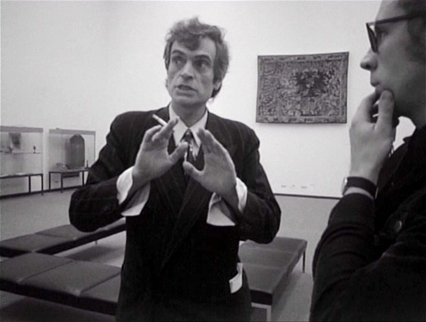 An image of Broodthaers from a documentary on the artist entitled “1924.” (2009)  (Via Film Festival Rotterdam.)

Born in 1924 in Brussels, Belgium, Broodthaers worked as a poet while also exploring journalism and film, before venturing into the visual arts in 1964 at the age of forty. By 1960, he had published two books on poetry, produced a film, and was giving lectures on art. One of his first art endeavors involved embedding fifty unsold copies of his book of poems entitled “Pense-Bete” in plaster. The artist is known to have said “I, too, wondered if I couldn’t sell something and succeed in my life… The idea of inventing something insincere finally crossed my mind and I set to work at once.” One of his most notable installations was exhibited in 1968, when the artist created his own private museum in his apartment in Brussels. Entitled “Museum of Modern Art,” the show was complete with labels and an accompanying catalogue. The artists work has been linked to Pop Art, Conceptualism, Dada and Minimalism, and is known for retaining an “elusive and enigmatic quality.” His exhibit “New dites pas que je ne l’ai pas dit- Le Perroquet,” will be showing at Peter Freeman, Inc through December 23rd, 2009.

This entry was posted on Sunday, November 22nd, 2009 at 3:57 pm and is filed under Go See. You can follow any responses to this entry through the RSS 2.0 feed. You can leave a response, or trackback from your own site.