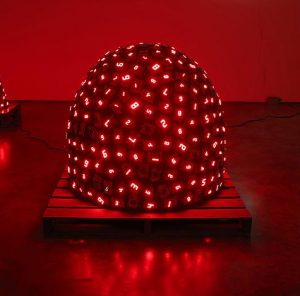 Currently on view at the Lisson Gallery in London are new works by Japanese artist Tatsuo Miyajima. For over twenty years Miyajima has created installations by using LED digital counting devices which continually count from 1-9 or backwards but never employ zero. They seemingly seek to establish a definitive rhythm at once repetitive and experiential, similar to the passing of time. Tatsuo ‘s new work continues to combine  performance with the architecture while also examining the development of life and the effects of large-scale natural disasters. 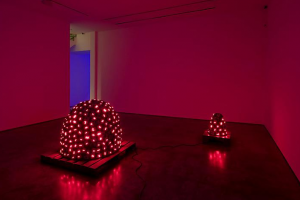 Pile Up Life was created to as a requiem to honor the lives lost in large-scale natural disasters. Exhibited for the first time in Europe, the work examines feelings feelings of powerlessness, despair, and fear. The series of towers are made with natural stones then embedded with LED lights called “counter gadget.” The works also reference traditional commemorative monuments from cultures in Eastern Asia, Canada, and the United States as well as celebrate the concept of eternal life found in Buddhism. 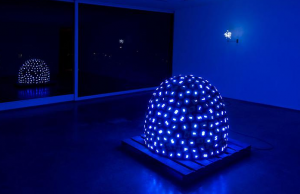 The “counter gadget” are made in red and blue each of which are programed to count up from 1 to 9 or down from 9 to 1. Their speed is determined by people who pray for requiem. 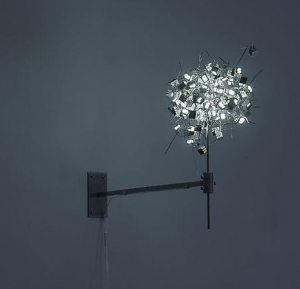 The clusters in Counter Fragile Brain represent the network of cells where the synapse activity takes place in the brain. For Miyajima the brain is the center of life and the human organ which most represents the human being. 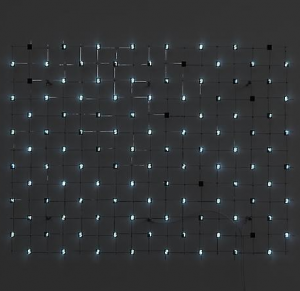 C.F. Life Structurism No.5 (2008) by Tatsuo Miyajima, via Lisson Gallery

Tatsuo Miyajima was born in Tokyo in 1957 and graduated from the Tokyo National University of Fine Arts and Music in 1986. He has exhibited his work at the Hara Annual as well as the Venice Biennale. His work can be found in major galleries and collections in Japan and internationally.

This entry was posted on Tuesday, December 29th, 2009 at 6:00 pm and is filed under Go See. You can follow any responses to this entry through the RSS 2.0 feed. You can leave a response, or trackback from your own site.