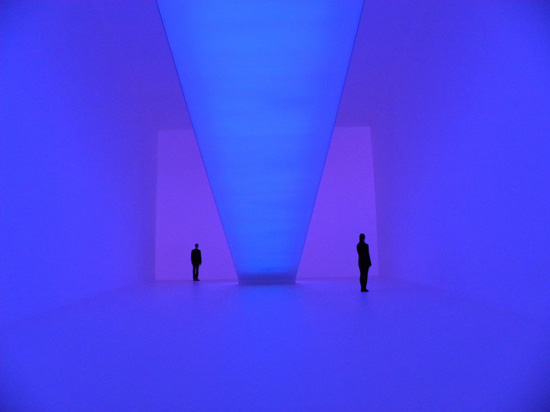 Currently showing at the Kunstmuseum-Wolfsburg  in Germany is an exhibit by Californian artist James Turrell. The exhibit marks the artist’s largest ever walk-through light installation. Situated within a museum context, the structure reaches eleven meters in height — almost touching the museum’s glass roof, and  covers 700 meters of floor area. Entitled “Bridget’s Bardo” the work is inspired by the cosmic qualities of the Roden crater– an extinct volcano in the desert outside of Flagstaff, Arizona and the site of Turrell’s ongoing and most ambitious project of his career.  Turrell has been working on the crater since 1974 in an attempt to turn the subterranean crevice into a kind of artistic observatory where celestial light, in its myriad forms, can be studied and observed. The artist, who works predominantly with light, perception and space, has been working exclusively with the “immaterial” mediums since the 1960’s– continuously exploring the ways in which light interacts with surfaces, colors and spaces while using installation exhibitions to immerse viewers within the resulting visual–and often seemingly tactile– meditative experiences. 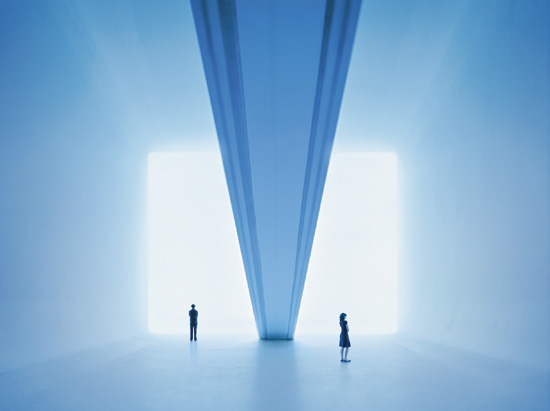 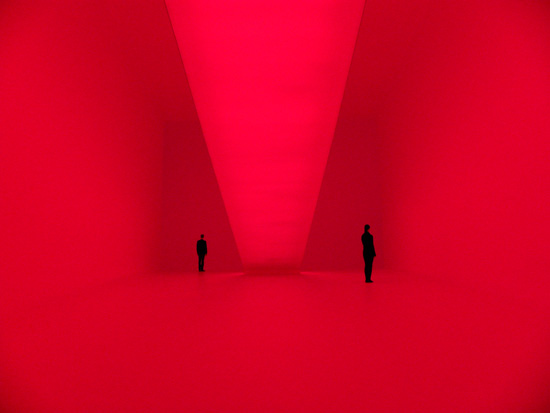 James Turrell, “Bridget’s Bardo” 2008, Via DesignBoom The artist once remarked, “I am really interested in the qualities of one space sensing another. It is like looking at someone looking. Objectivity is gained by being once removed. As you plumb a space with vision, it is possible to “see yourself see.” This seeing, this plumbing, imbues space with consciousness.” (PaceWildenstein) 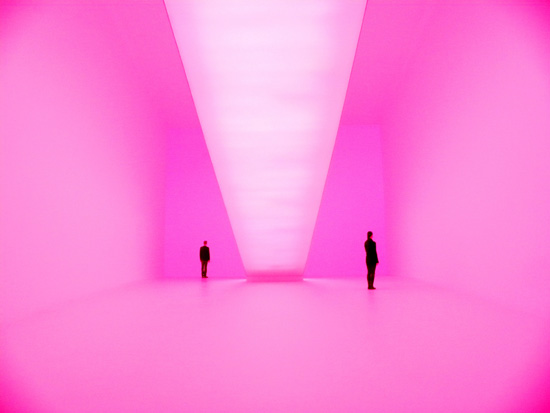 James Turrell, “Bridget’s Bardo,” (2008) Via DesignBoom. Structurally, the installation is hollow and divided into two interconnecting, empty chambers. The spaces are flooded with changing colored lights, and viewers enter the work by way of a steep ramp that begins on the upper floor and travels down into the viewing space. 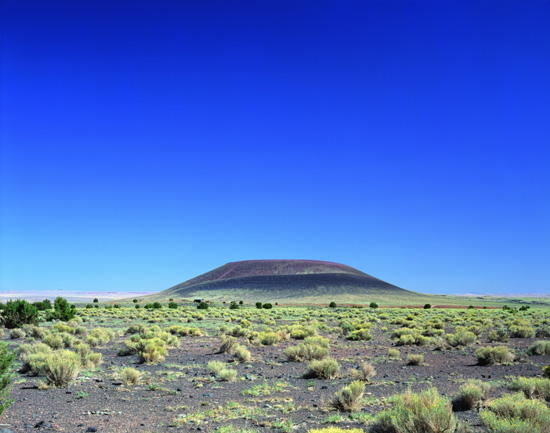 The “Roden Crater” ( Via DesignBoom) is situated near the Grand Canyon. The artist, who purchased the land with grants from the Guggenheim Foundation and the Dia Art Foundation, has been working on transforming the geography into a celestial observatory for the past thirty years. 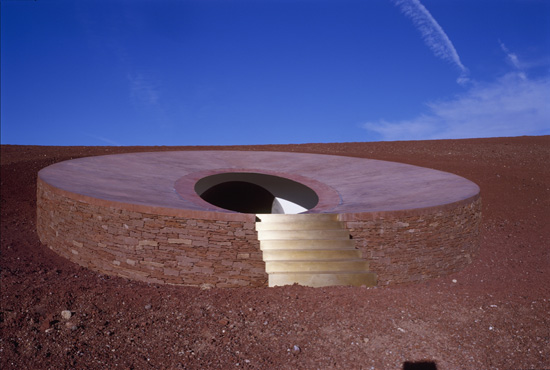 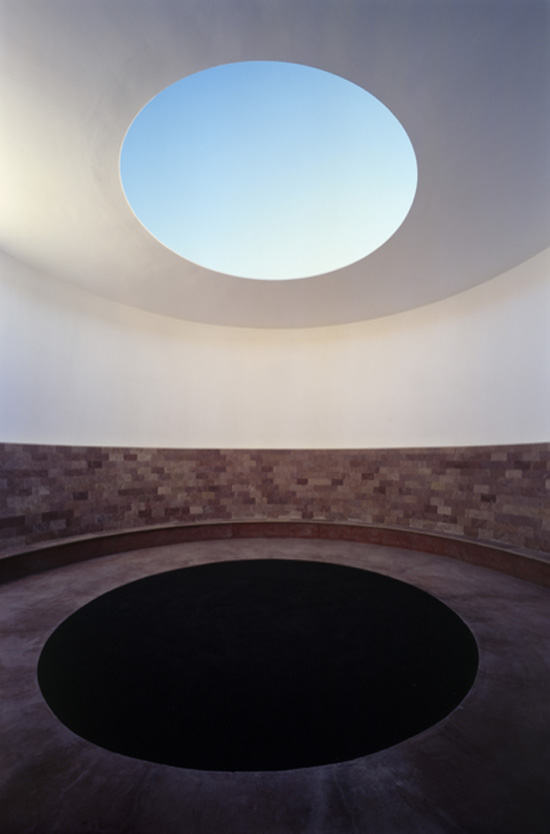 James Turrell, “Roden Crater, Crater’s Eye, Skyspace” Via DesignBoom. Turrell’s model for the installation is drawn from cosmological phenomena– the crater is meant to bring the heavens down to earth, forming a link between the actions of people on earth with the movements of the galaxies and planets. 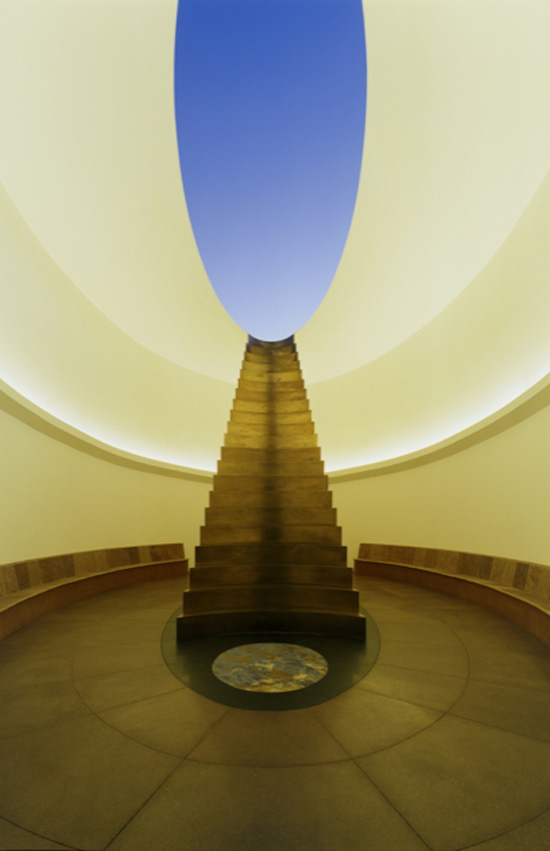 James Turrell “Roden Crater, east portal, skyspace” Via DesignBoom. “Through the medium of light, the piece relates to the sky, land and culture (PaceWildenstein).”

Born in 1943 in Los Angeles, James Turrell has exhibited his work in over 140 solo exhibitions worldwide since 1967 and is the recipient of several prestigious awards including the Guggenheim and MacArthur Fellowships. His work with space and light is informed by his scholarly studies in perceptual psychology and optical illusions and aims to place the viewer in a field of pure experience where perception is often extended and enhanced. Turrell has described his work as involving “feeling with your eyes.”

“The Wolfsburg Project” will be on exhibit at Kuntmuseum-Wolfsburg in Germany through April 5th, 2010.

This entry was posted on Thursday, December 10th, 2009 at 11:35 am and is filed under Go See. You can follow any responses to this entry through the RSS 2.0 feed. You can leave a response, or trackback from your own site.