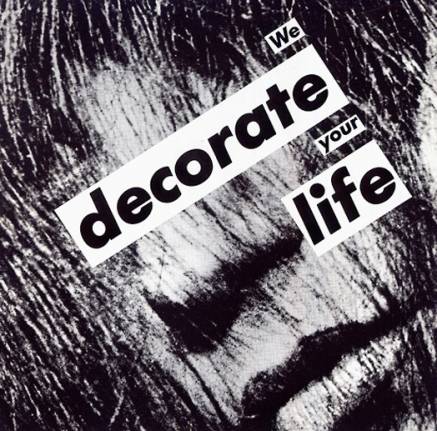 Untitled (We Decorate Your Life) by Barbara Kruger

Sprüeth Magers Gallery in London presents a retrospective of Barbara Kruger’s early works, now on display through January 23rd.  In this rare opportunity to see this portion of her collection, one will note the raw and less yielded approach in these pieces than in her later more refined works.

Untitled (Your Seeing Is Believing) by Barbara Kruger

Kruger’s haunting and exposed imagery is juxtaposed with blaring statements of text relative to the political injustice of the world. All wording shows her simplistically fantastic use of Futura type. They note her distaste for consumerism and mass media with such phrases as “Our Prices are Insane!” and “Who is Beyond the Law?” speaking to us in clichés but saying much more. 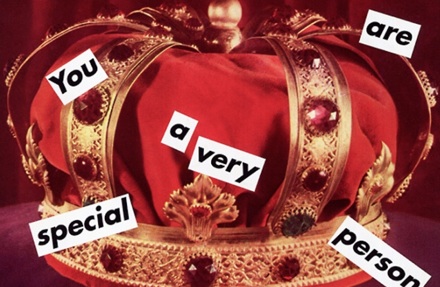 Untitled (You Are a Very Special Person) by Barbara Kruger

Another central theme to her works is the question of power and the identity of those who dictate justice. As seen in “Untitled (You Are a Very Special Person)” the bejeweled crown symbolizes authority while the words speak of subordinate mockery. 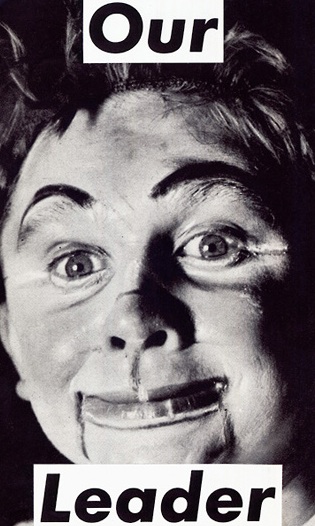 Untitled (Our Leader) by Barbara Kruger

To quote Kruger, “I’m an artist who works with pictures and words. Sometimes that stuff ends up in different kinds of sites and contexts which determine what it means and looks like.” It is no question that with the words like “Our Leader” in the above piece “Untitled (Our Leader)” when put directly in front of the image like that of the puppet-like face, also reference authority and their premeditated actions.  However, we are open to the fact that if removed from the image, the words and picture alone take onto themselves a whole new relationship with the viewer.

A gallery view of Barbara Kruger’s “Paste Up” exhibit

All of the pieces in the collection are relatively small (nothing exceeding over 11” x 13”) but carefully show Krugers hand work and her history of layout training.

Untitled (Who Is Bought And Sold?) by Barbara Kruger

Kruger recently was commissioned by the Lever House Art Collection in New York City to produce a series of window graphics which are indicative of her “Paste Up” style where she has employed large, bold typographical text to speak to the viewer about politics, powers and our hypersensitive world. She currently lives in Los Angeles and New York, and is a professor at UCLA. Her works have been displayed at the Museum of Contemporary Art, Los Angeles; Whitney Museum, New York; Tate Gallery, London; Rhona Hoffman Gallery, Chicago and Yvon Lambert, Paris. Most notably, she won a “Golden Lion” at the 51st Venice Bienaale for Lifetime Achievement.

All images via Sprüeth Magers Gallery unless otherwise noted.

IN CASE YOU MISSED IT: PETS ACT SAVING ANIMALS

In the wake of the deaths of so many pet owners who refused to leave their animals behind during Hurricane Katrina, Congressman Christopher Shays and the late Congressman Tom Lantos introduced H.R. 3858, the Pets Evacuation and Transportation Standards (PETS) Act. This common-sense bill requires state and local preparedness groups to include plans for evacuation of pet owners, pets and service animals in the event of a major disaster. The PETS Act was signed into law on October 6, 2006.

That [Hurricane Katrina] led to the Pets Evacuation and Transportation Standards Act, passed by Congress in 2006 to make sure state and local governments help pets’ during a major disaster or emergency. Texas passed a similar law last year. site austin humane society

“This act is not only saving pets’ lives – it’s saving human lives,” said Scott Haisley, senior director of emergency services for the Humane Society of the United States, which supported the federal law.

In the first major Gulf hurricanes since Katrina, officials in cities across Texas say housing the furry, feathered and scaly loved ones of evacuees has for the most part gone well.

Cities house hundreds of pets after Gustav, IkeBy JAY ROOT and ANGELA K. BROWN – 2 hours ago AUSTIN, Texas (AP) – Hurricane Ike was about as mighty and destructive as they come, but it couldn’t break the bond between Nora Smallwood and her two dogs. She’d just as soon drown than abandon them to Mother Nature’s fury.

“They’re my life,” the 78-year-old said after being evacuated from her home in La Marque, near Galveston. “There was just no way I was going to leave them.” Luckily, she didn’t have to. She usually visits Honey and T.T. twice a day, riding a city bus to the Austin Humane Society from her shelter at the convention center.

Like Smallwood, hundreds along the Gulf Coast evacuated with their pets before hurricanes Gustav and Ike roared ashore this month – unlike in Katrina in 2005. Many Louisiana residents were not allowed to take pets on buses, causing more anguish. Others refused to leave their animals behind, leaving many to perish with their pets.

That led to the Pets Evacuation and Transportation Standards Act, passed by Congress in 2006 to make sure state and local governments help pets’ during a major disaster or emergency. Texas passed a similar law last year.

“This act is not only saving pets’ lives – it’s saving human lives,” said Scott Haisley, senior director of emergency services for the Humane Society of the United States, which supported the federal law.

In the first major Gulf hurricanes since Katrina, officials in cities across Texas say housing the furry, feathered and scaly loved ones of evacuees has for the most part gone well.

Health regulations prohibit the creatures from living in the same rooms as people, so some cities provide transportation so evacuees can visit their pets at animal shelters. That gives them something to do and makes them feel better during a time of upheaval, officials said.

“That is emotionally comforting to people because they have contact with the only thing they feel they have left,” said Dorinda Pulliam, shelter director for Town Lake Animal Shelter in Austin. austinhumanesocietynow.net austin humane society

In Austin, officials drop off pet supply kits – including carrying crates and waste disposal bags – before evacuees even arrive at the shelters. Other cities have adopted similar models.

Fort Worth keeps evacuees’ pets at the city animal shelter and provides free microchips for the critters to make sure they will be matched with their owners.

Evacuees staying at the Dallas Convention Center can play and cuddle with their pets at another area of the complex just across the street.

“We get a lot of hugs from folks with tears in their eyes,” said Kent Robertson, a division manager with Dallas animal services. “Their homes have been destroyed, and they don’t know what they’re going to do, but they have a place for their animals.” But some evacuees resist giving up their animals, even temporarily.

Pulliam said one elderly couple staying at an Austin shelter slept in a car outside with their two cocker spaniels, rather than turn them over to shelter workers.

Last weekend, Galveston resident Ida Navejar ran away from the Austin Convention Center with her iguana, Iggy, and one of her five Chihuahuas, Cha Cha, because she apparently thought she would not get them back from the animal shelter. But the 19-year-old and her pets were found after police put out a bulletin, and Navejar returned after reassurance that her animals would be cared for and later returned.

Before Gustav and Ike, owners weren’t the only ones leaving hurricane-prone areas with pets. Animal shelters in harm’s way evacuated cats and dogs to several nonprofit animal welfare agencies across Texas.

The SPCA of Texas took in about 300 animals from Louisiana shelters before Gustav hit earlier this month, then accepted 235 more from South Texas shelters in Ike’s path last weekend. That’s in addition to the 500 cats and dogs already at the SPCA’s two shelters in Dallas and McKinney.

“Animals are totally dependent on people, and we have to be there as an organization to do this,” said James Bias, president of the Dallas-based SPCA of Texas.

Animal rescue groups in other states helped out by taking some of those cats and dogs, but several hundred remain at the Dallas-area shelters – as well as in other cities. They are up for adoption and won’t return to their former shelters, which have to make room for any stranded pets found in the hard-hit cities along the Gulf Coast.

So far, Humane Society workers have rescued several hundred animals after Gustav and Ike. But they said they expect the number to be far less than the 10,000 pets rescued in Louisiana and Mississippi after Katrina – and far less than the scores found dead.

“We are seeing fewer animals left behind,” Haisley said.

This entry was posted on Monday, December 21st, 2009 at 1:00 am and is filed under Go See. You can follow any responses to this entry through the RSS 2.0 feed. You can leave a response, or trackback from your own site.