Currently on view  is the first exhibition of iconoclastic French artist Cyprien Gaillard (b. 1980) to be shown at Sprueth Magers Berlin. Comprised of the 16mm film Cities of Gold and Mirrors (2009) and the photographic works Geographical Analogies (2006-2009), the exhibition follows Gaillard’s concern with the controlled and shimmering demolition of natural and man-made monuments.

As an artist, “interested in things failing, in the beauty of failure, and the fall in general,” Gaillard has sought to map the human imprint on architecture and geography by vandalizing historical landmarks and receptacles of memory, then slowly retracting his hand from the course of the destruction. Describing his art as “post-entropic – in pursuit of the big moment after the chaos,” the artist has documented in sculpture, painting, etching, photography, video, performance and large scale, public interventions, cataclysmic shifts that engulf time and hasten modern ruins. 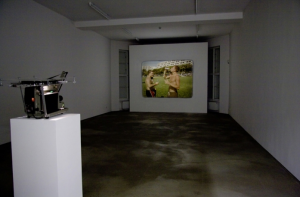 Drawing influence from the ruiniste painter Hubert Robert (who painted the Louvre as an imaginary ruin) and French philosopher Denis Diderot, according to whom “one must ruin a palace to make it an object of interest,” Gaillard is fixated on the potential inherent in subverting contemporary utopias, or what lies beneath their so often tragically exploited ground works. Cities of Gold and Mirrors, thus, is filmed in the Mexican city of Cancún on the Yucatán Peninsula, and consists of a sequence of five parts accompanied by a looped theme (the soundtrack of the cartoon The Mysterious Cities of Gold, a French/Japanese production popular in the 1980s). Beginning with the Spanish conquistadors, the film fuses South American history, archaeology and science fiction to depict the dilapidation of the city of Cancún, abused by hedonistic tourism. Compressing past and present in his signature style, Gaillard anachronistically plots a tragedy of over-consumption overshadowing the fallen Mayan Empire. 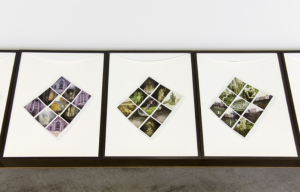 The second portion of the exhibition, Cyprien Gaillard’s Geographical Analogies, displays a series of Polaroids encased in vitrines. The photographs’ treatment behind glass, similar to museum artifacts, accentuates the archaeological rift between their respective sites of geographical origin. Furthermore, the juxtaposition of photographs highlights the visual incongruities between their images of Mexico and Egypt, World War II bunkers on the Normandy coast, Bronx housing projects and Scotland golf courses. Gaillard creates a system of archives whereby he negates the inherent political hierarchies between sites and perhaps even re-attributes a sense of heritage to them despite the psychological displacement the contrasted images produce. 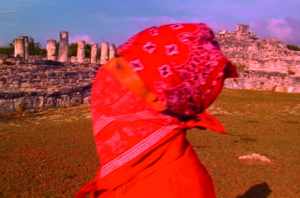 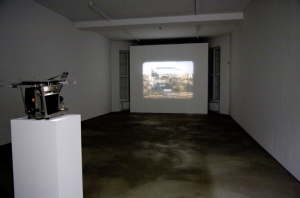 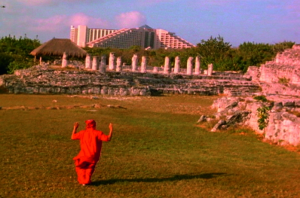 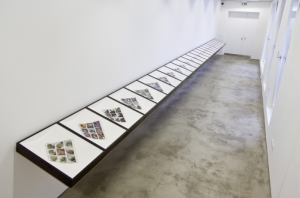 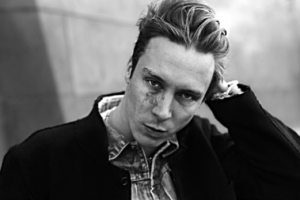 All images via Sprueth Magers unless otherwise noted.

This entry was posted on Thursday, January 7th, 2010 at 1:20 pm and is filed under Go See. You can follow any responses to this entry through the RSS 2.0 feed. You can leave a response, or trackback from your own site.