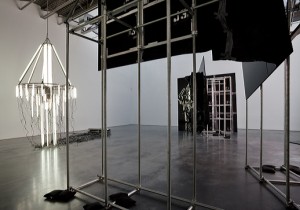 Installation View All pictures via Gladstone Gallery unless otherwise noted

Currently on view at Gladstone Gallery, 530 West 21th street, is a new installation by Banks Violette, a renowned New York Minimalist and conceptual artist. Appropriately untitled, the installation encompasses Violette’s signature use of replaceable materials, monochromatic palette and the openness to myriads of interpretations.  The centerpiece of the installation is a large chandelier made of multiple fluorescent tubes . Wires fall in a cascade alongside the chandelier while the apparatus of steel tubes and sandbags supporting the wall remain in plain sight. By exposing these technical banalities, the artist probably seeks to reveal the theatrical and artificial essence of his oeuvre, in which he heavily draws on the legacy of Conceptual sculptors Donald Judd and Dan Flavin. The installation is organized in collaboration with Team Gallery and is on view until April, 17.
More text, images and related links after the jump: 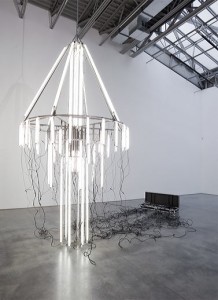 Appropriately described by the British critic and curator Francesca Gavin as New Gothic Art in her 2008 book Hell Bound, Violette’s oeuvre explores the morbid themes of ritual murder, teenage paranoia and suicide.  Among the artist’s sources of inspiration are extreme metal, hardcore punk, motorcycle clubs, pornography, and other elements of popular culture.  As Gavin describes it ” There are monsters, the grotesque, violated or mutant bodies, the divided self, ghosts, dolls, masks, skulls, disgust and the abject. These are images filled with the colour black, decay and instability. Fear is reflected on the environment, or on to the self, or on to others. Sometimes the work is nihilistic or anarchic”. 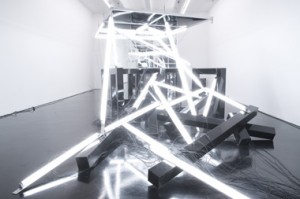 Fragment of the installation 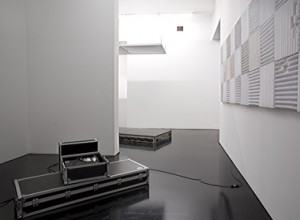 Violette speaks of his works: “I’m interested in a visual language that’s over-determined, exhausted, or just over-burdened by meaning. The heavy-handed one-to-one of ‘black-equals-wrong’ is incredibly interesting to me — less as something that has a meaning in itself, but more in how those visual codes can somehow become reanimated. That’s constant throughout my work. All those images are like zombies — they’re stripped of vitality, yet sometimes they get life back in them … and. like zombies, usually something goes wrong when they wake up again”. 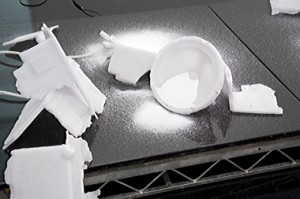 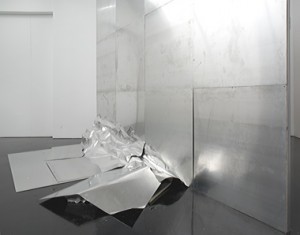 Born in 1973, Banks Violette received his BFA from School of Visual Arts in 1998, and in 2000, completed his artistic training by receiving MFA from Columbia University in New York. Since then, his work was subject of exhibitions at various museums and galleries internationally, including the Whitney Museum of American Art,New York, the Yerba Buena Center for the Arts ,San Francisco, Schirn Kunsthalle Frankfurt, Museum Boijmans van Beuningeng in Rotterdam, the Migros Museum in Zurich. The artist participated in the “Greater New York” exhibition at PS1 Center for Contemporary Art in New York and “USA Today” at The Royal Academy ,London. His work is featured in several prominent collections including the Musee d’Arte Moderne et Contemporain Geneva, Museum of Contemporary Art, Los Angeles, the Saatchi Gallery in London, and MOMA and the Guggenheim Museum, both in New York. He is represented by Team Gallery in New York, Maureen Paley Gallery in London and Galerie Thaddaeus Ropac in Salzburg.

Q: How do you ‘negotiate’ with markets?

A: Through supply and demand. You approach the market, perhaps by standing outside a stock exchange holding a megaphone, and say “I am the President of Sinn Fein and I demand to be supplied.” Q: What is the structural deficit?

A: It’s the difference between the money you put into Spanish apartments and the value of the few that have actually been built.

Q: What is sovereign debt?

A: I’m glad you raised that point. As Baron Munchausen By Proxy of Chingford-on-the-Wold, I am entitled to 30 shillings a fortnight from the royal purse which has, regrettably, yet to be paid.

Q: What is subordinated debt?

A: Money owed to you by a subordinate, such as anyone below the rank of quartermaster. Sometimes it can be securitised but that’s really a matter for the nutting squad.

Q: Have you revised your position on the bank guarantee?

A: Certainly not. I guaranteed that we had nothing to do with the Northern Bank raid and that remains my position. go to site free coupons for groceries

Q: Do you support recapitalisation?

A: Obviously, in a united Ireland, the capital could be moved to Armagh or perhaps alternated monthly between Belfast and Dublin. Even if we settled on Dublin it would still be the new capital of a new country, so yes, it would have to be recapitalised.

Q: Should the pension reserve be raided?

A: Look, I told you we didn’t rob the bank. Our reservists made their own pension arrangements and raids would bring back memories of the RUC.

Q: What is the duty on cigarettes?

A: I’m not concerned with minutiae. Nobody I know pays duty on cigarettes.

Q: What is marginal tax?

A: It’s when you get a statement from your accountant and he’s written in the margin: “I’ve stashed this in a wheelie bin to avoid tax.” Q: How are yield and interest related?

A: Very closely. According to my relatives in Dundalk, the Stop signs down here all say Yield and I would be interested in extending that use of Irish to the six counties.

Q: What is the coupon rate on government paper?

A: It is precisely because the papers are controlled by government that I refuse to read them. However, I am told they often contain several pages of coupons for groceries and the like.

Q: What is the basis point spread?

Q: What would you tell the IMF?

A: I would tell them to go home. However, if some of them believe they are British, I would allow them to stay, pending a process of outreach in which they gradually accept they are already home.

Q: What would you tell the ECB?

A: I would tell them that in these difficult times it is important to keep electricity bills down.

Q: How would you burn the bondholders?

A: I’d stack the pallets first, then the tyres. Then add the petrol.

This entry was posted on Friday, April 2nd, 2010 at 1:55 pm and is filed under Go See. You can follow any responses to this entry through the RSS 2.0 feed. You can leave a response, or trackback from your own site.