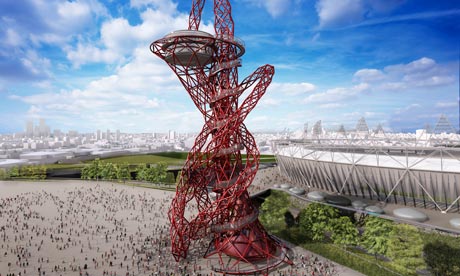 A spiraling sculpture designed by Turner Prize-winning artist Anish Kapoor, in collaboration with leading structural designer, Cecil Balmond, has been chosen as the monument to mark the London 2012 Olympic Games. When finished, the 377-foot sculpture will stand taller than Big Ben or the Statue of Liberty and is set to dominate the east London landscape, perhaps as a permanent attraction for generations to come.  Kapoor and Balmond’s Orbit, which will be placed between the aquatics center and the main stadium, was chosen from a shortlist of three, beating tower-based bids by the artist Antony Gormley and the architects Caruso St John.Indian steel magnet, Lakshmi Mittal, is providing about $24 million of the total cost of the structure, with the remaining amount coming from the Greater London Authority. From the beginning, the award of the Olympics to London has been regarded as bad news and so, the unveiling of this colossal monument has provided much opportunity for jestering. Officially titled ArcelorMittal Orbit, suggested nicknames are rolling in thick and fast: The Guardian favored suggestions such as ‘The Leaning Tower of Umbilical Cord’, another suggested ‘Hubble Bubble’ or the ‘Colossus of Stratford’

A full round-up of links after the jump……

This entry was posted on Thursday, April 1st, 2010 at 4:29 pm and is filed under Art News. You can follow any responses to this entry through the RSS 2.0 feed. You can leave a response, or trackback from your own site.