May 10th, 2022
REFERENCE LIBRARY
Home » AO Auction Preview: Christie's and Sotheby's hold their biggest ever sales of Impressionist and Modern art in London

AO Auction Preview: Christie's and Sotheby's hold their biggest ever sales of Impressionist and Modern art in London

The June sales in London are packed with potentially record-breaking Impressionist and modern works that are expected to fetch a combined total of £300-450 million. If the pre-sale estimates are realized, these the most lucrative series of auctions ever held in London, easily surpassing the £298 million realized in June 2008 before the global economic meltdown during which the June sales achieved just £96 million. Giovanna Bertazzoni, Director and Head of Impressionist and Modern art at Christie’s, London has noted the recent confidence renewed in vendors in light of the the strong results witnessed at auction over the last year, “we are witnessing a great willingness from clients to consign works of art of the highest quality. There is a fierce international demand in the art market, particularly for the rarest and the best, and the market itself is now truly global as illustrated at our auction in New York in May where we saw bidding from Russia, China and the Middle East, as well as from Europe and the Americas.” 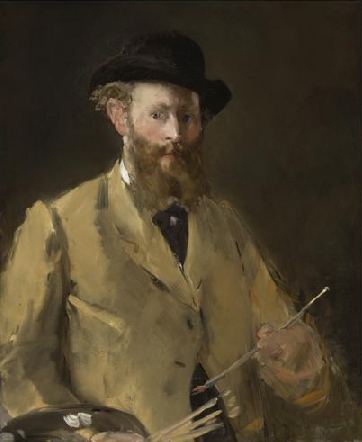 Sotheby’s open the season tomorrow with an Impressionist and modern evening sale featuring a rare set of 51 trophies that are expected to fetch between £101 and £148 million – higher than for any previous Sotheby’s sale in London.  The evening’s top lot is Edouard Manet‘s fetching Self-Portrait with a Palette. Described by Charles Moffett, Sotheby’s Executive Vice President, as “one of the very greatest self-portraits in the entire canon of art history,” the painting is expected to fetch between £20 and £30 million. Another highlight is Matisse‘s Odalisques Jouant aux Dames (est. £10-15 million) which makes its first ever appearance at auction – the work comes from a group of 140 works discovered in 1979 in a Parisian bank vault belonging to the deceased art dealer Ambroise Vollard, who played an important role promoting artists including Renoir, Cezanne, Picasso and Matisse. Another work from Vollard’s long-lost collection to feature in the sale is Andre Derain‘s Fauvist landscape, Arbres a Collioure, which is expected to fetch up to £14 million. 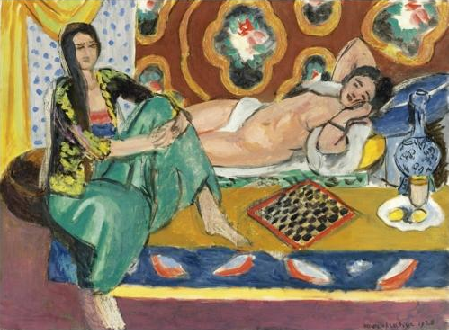 Christie’s, whose $336 million tally at May’s Impressionist and modern evening sale in New York lambasted the $196 million achieved by rivals Sotheby’s, have snagged 63 trophy works for its evening sale on June 23 that are expected to fetch a combined total of £160 to £230 million – making it the most valuable art auction in history.

The cover lot is Picasso’s portrait of his friend Angel Fernandez de Soto, which is estimated at £30-40 million. Painted in 1903 during the artist’s famous Blue Period, Portrait d’Angel Fernandez de Soto was described by Christie’s earlier this year as “one of the most important works of art to be offered at auction in decades.” The work was bought by Lord Andrew Lloyd-Webber in 1995 for £18 million, and is now being sold by his charitable foundation.

Another painting generating excitement is Claude Monet‘s water lily painting, Nymphéas, which is also expected to fetch between £30 and £40 million. Nymphéas was included in the artist’s historic exhibition of his water lily series in Paris in 1909 and remained in the ownership of the Durand-Ruel art dealing family for a number years before selling to a lone-bidder for £13.6m 10 years ago at Christie’s in New York.

Two other pictures that are expected to perform well are Gustav Klimt‘s Frauenbildnis (Portrait of Ria Munk III), one of the artist’s sought-after female portraits which is estimated at £14m to £18m, and Van Gogh‘s Parc de l’hopital Saint-Paul which was painted during the artist’s voluntary confinement at Saint-Paul the year before he killed himself.

Human Events November 14, 2005 | Gizzi, John Election Night Although most of the national news media focused on elections for governor in Virginia and New Jersey last week, there were races for other offices as well as initiatives and referenda of great interest to conservatives. Among them:

California: Will Arnold Be Back?

The political setback inflicted on Republican Gov. Arnold Schwarzenegger from the defeat of his reform initiatives (see cover) dominated political news in the Golden State. With all seven measures backed by the governor going down, there is mounting speculation that Schwarzenegger-who won his office in a special recall election two years ago-will not seek a full term next year.

San Diego Switch Following the resignation of the incumbent mayor of San Diego amid corruption charges, voters elected as their new mayor former Chief of Police Jerry Sanders. He defeated City Councilwoman Donna Frye, a surfshop owner with backing from environmental activists. As area Rep. Darrell Issa (R.-Calif.) told me after the election: “It was a choice between an unusual candidate-because police chiefs don’t usually make good candidates-and someone from another planet.” Waterbury, Conn.-‘Right On, Write-In’ The most closely watched mayoral race in the Nutmeg State ended with a climax worthy of a political thriller by Alien Drury or Fletcher Knebel. In its first election after the end of five years under a state oversight board, Waterbury, Conn., elected two-term incumbent Michael Jarjura as a write-in candidate. The results of what could well be the first-ever election of a big-city mayor by write-ins in Connecticut history were made even more dramatic by the fact that Jarjura had lost the Democratic primary earlier this year to Karen Mulcahy, whom he had fired as tax collector on grounds that she was rude to taxpayers. Mulcahy retaliated with a lawsuit, but later settled for an undisclosed sum paid by a private contractor that had assumed Waterbury’s tax liens. Mulcahy later used the money to fund her winning primary race against arch-foe Jarjura.

Beaten but not discouraged, Jarjura launched a write-in campaign to retain his job. In the process, he not only faced Mulcahy, but also a past Democratic primary foe now the candidate of the Independent Party, a Republican, and two others. Jarjura finally topped the field of six candidates with 38% of the vote-all of them write-ins. in our site detroit lions tickets

Detroit-Dancin’ in the Streets With Detroit’s unemployment hovering between 12.7% and 15% (or well more than twice the jobless rate in Michigan or nationwide) and city government increasingly operating in red ink, Motor City voters almost turned out Mayor Kwame Kilpatrick. However, the nation’s youngest (35) big-city mayor finally claimed victory by a margin of 53% to 47% over Freman Hendrix, who had been chief of staff to former Mayor (1993-2001) Dennis Archer. Both Hendrix and Kilpatrick are African-American Democrats.

Along with his city’s moribund economy, Kilpatrick, son of Rep. Carolyn Cheeks Kilpatrick (D.-Mich.), was repeatedly hit by embarrassing reports in the Detroit Free Press about how he handled his own money. Among the things the mayor was forced to explain and apologize for were running up $210.000 in three years on his city MasterCard (including big tabs at a Washington, D.C., nightspot and a Las Vegas spa) and spending $144,000 from the city’s petty cash account on such items as Detroit Lions tickets and a skybox at a Rolling Stones concert. In promising strong management of the city budget and lower taxes, the 55-year-old Hendrix also told voters: “I won’t embarrass you.” One celebrated winner in the at-large races for City Council was Martha Reeves, best-known for such hits as “Dancin’ in the Streets” while the lead singer for Martha and the Vandellas. Citing cases in which her businesses were struck by Detroit’s crime wave, the Gold Record-winning songbird ran on a tough anti-crime platform.

What was so special about Coleman? It turns out that opponent Kelly last year embraced President Bush during an appearance in Minnesota and crossed party lines to endorse and campaign for the Republican President. Andrew Leary, executive director of Minnesota Democratic-Farmer-Labor Party, might have well been speaking for Democrats nationwide when he said of Kerry’s appearance for Coleman: “Obviously, Sen. Kerry had something of a score to settle.” Ohio: Before the Storm The major news in the Buckeye State centered on several statewide “reform” initiatives that were slapped on the ballot in the wake of scandals surrounding Gov. Robert Taft and other statehouse Republicans. here detroit lions tickets

The major initiatives, campaigns for which were all funded by left-of-center groups, were all defeated: No. 2, more stringent requirements for absentee voting; No. 3, to reduce the limit on campaign donations to state candidates from $10.000 to $2,000; No. 4, to have a panel of retired judges oversee redistricting instead of the present system of leaving it to three statewide elected officials; and No. 5, to take oversight of state elections from the secretary of state and placed in the hands of a special commission.

One interesting result that may portend bad days ahead for Republicans came in the race for clerk of Franklin County (Columbus). In what would normally have been a slam-dunk for the GOP, incumbent Republican Clerk Michael Pirik was unseated by Democrat Lori Tyack. Tyack, who rolled up more than 55% of the vote, is the wife of former Court of Appeals Judge Gary Tyack, who is already being boomed as a possible opponent to Republican Rep. Pat Tiberi next year.

Virginia: The Other Races Besides the gubernatorial contest in Virginia last week (see cover), there were other key elections in the Old Dominion. In the other two statewide races on the ballot, Republican State Sen. Bill Bolling narrowly won the lieutenant governorship over former U.S. Rep. (1992-94) Leslie Byrne (D.-Va.) and Delegate Bob McDonnell was in a virtual dead-heat for attorney general with Democrat Creigh Deeds, also a state delegate. A recount is sure to follow. Both Boiling and McDonnell are considered strong conservatives.

Washington State: Close Calls In a state more often dubbed “blue” rather than “red,” Washington State voters came close to upending Democratic Gov. Christine Gregoire’s half-cent increase in the fuel tax. One year after she was declared governor on a third count of the ballots, Gregoire’s tax increase just survived a statewide repeal initiative, 52.5% to 47.5%.

King County (Seattle) Executive Ron Sims, one of the state’s high-profile Democratic powers, managed re-election in a heavily Democratic county by an unimpressive margin of 54% to 40% over Republican County Councilman David Irons. Having had to buck the county GOP organization and win a contested primary, lawyer Reagan Dunn was an easy winner in a race for an open county council seat. Dunn, named for the former President, is the son of former Rep. (1988-2004) Jennifer Dunn.

[Author Affiliation] Mr. Gizzi, political editor of HUMAN EVENTS, welcomes political intelligence from subscribers on campaigns and issues at the local and state level. Though he cannot reply to all correspondents, we appreciate your contributions.

This entry was posted on Monday, June 21st, 2010 at 8:05 pm and is filed under Auction Results. You can follow any responses to this entry through the RSS 2.0 feed. You can leave a response, or trackback from your own site.