Currently on view at Arratia Beer is a new video piece entitled Talk Show by Omer Fast. The work was originally recorded in front of a live audience as part of Performa in 2009, and continues Fast’s interest in the liminal space between fact and fiction as mediated by film. Set in a theatrical, talk show like setting, the film records Lisa Ramaci relating her personal story about the Iraq war to actress Rosie Perez, who was hearing the account for the first time. When Ramaci finishes her story, Perez re-tells the story to another performer. This process of re-telling is repeated for a total of six renditions, and, much like the childhood game of Telephone that the work is inspired by, results in many factual errors and even becomes comedic. 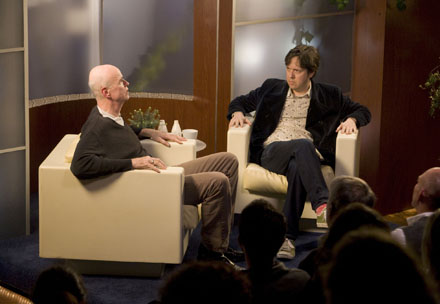 The video stresses the vast difference between a first person narrative to a sixth person narrative, and the mechanics of oral history. Because of the political topic, it also has intimations about the way that the news is reported and how factual events become news stories. The video also explores the format of the talk-show confessional atmosphere so prevalent in television today, but within the artistic context, exposes it as a construct. 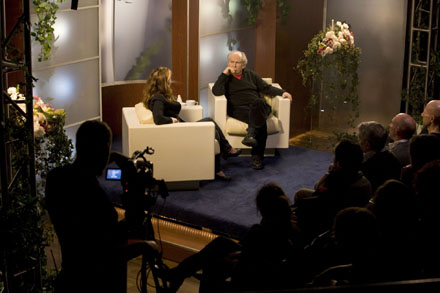 This entry was posted on Thursday, June 3rd, 2010 at 1:00 am and is filed under Go See. You can follow any responses to this entry through the RSS 2.0 feed. You can leave a response, or trackback from your own site.