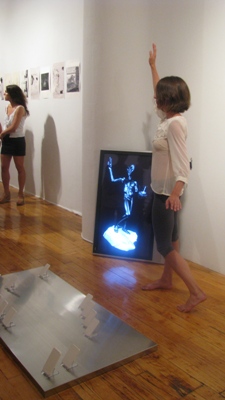 Hired dancer at exhibit next to piece chosen by curator James Shaeffer
All images by Olivia Loving for ArtObserved unless otherwise noted. 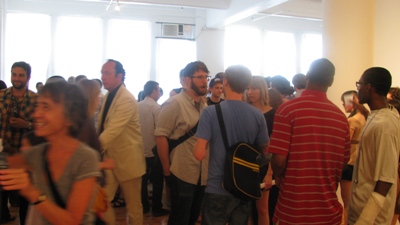 Art Observed was on site July 22nd for the opening of ‘Young Curators, New Ideas III,’ the new exhibit at P.P.O.W. in Chelsea, Manhattan. As the name suggests, the exhibit focused on eight individual curators and the pieces that they chose. The list of curators is as follows: Andrew Russeth & Liza Buzytsky, Erin Dziedzic, Kate Greenberg & Hilary Schaffner, Stamatina Gregory, Gabriella Hiatt, and James Shaeffer. The gallery was packed, and despite no air-conditioning (handmade fans and cups of water abounded), the elevators constantly opened and closed, shuffling in new visitors. The exhibit will be on show until August 20th, 2010. 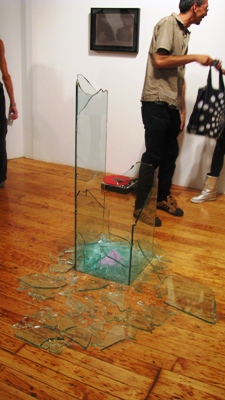 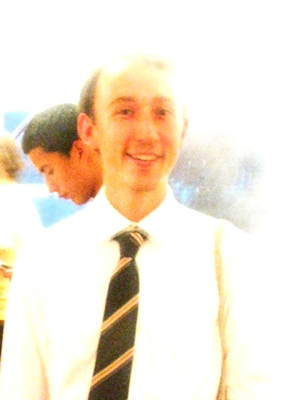 AO was able to speak with the curators, who explained the reasoning behind their choices of the works of art. Andrew Russeth worked with Liza Buzytsky, who both curated the exhibit and whose work was included. Their exhibition was titled Personal / Public / Private, and had an almost “more than meets the eye” theme. I’ll Stab you in the Back (2009), by artist Alexandra Spaulding, is a sound piece that “is [both] monotal but really textured sound,” according to Russeth. In this sense, it appears to be a “public” display that eventually becomes intimate and private. Though the music seems dense, it is actually more complicated – a“private language that’s being expressed.” Buzytsky had work shown in the same exhibit. Hers was titled I Don’t Live Here Anymore (2010) and she became inspired to create the piece during her day job at an art shipping company. She has taken a mirror and broken it so that the individual pieces rise cut and shattered. As Russeth explained, a mirror is a “minimalist structure” that becomes more personal when it is broken. 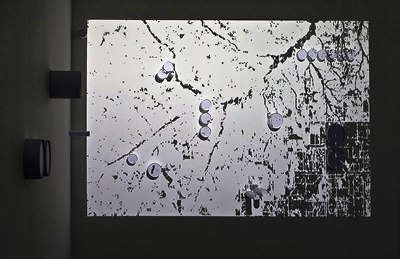 Gabriella Hiatt’s exhibit, Immaterial Architecture, consists of only one work of art. Hiatt began her process searching for “different artists who work with intangible and ephemeral materials to create these forms in space.” Because her artists needed a large work area, she was limited by a lack of space in the gallery. She eventually picked Jan Tichy, whose video combines “architectural elements” with a “changing projected environment” and therefore symbolizes a clash or tension between the two. Hiatt explained that her idea began “with the housing crisis and the instability of built environments.” After the recession, many people became disillusioned with these structures’ ability to last. 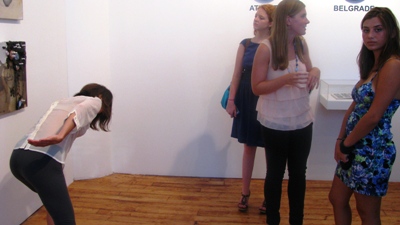 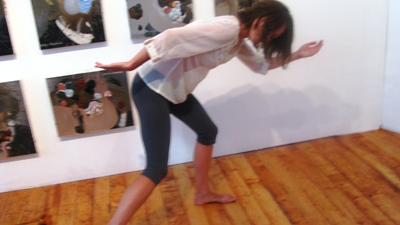 Hiatt also created another exhibit. Throughout the opening, hired dancers moved through the crowds, creating and holding poses. Apparently, the dancers were very aware of “in-between spaces” in the gallery, or places that served as passages or connections to other rooms. The dancers served as almost opposites to the houses or to the “built environments” that Hiatt was describing, as the dancers both “took over and defined spatial environments.” They were loose and free; the houses are fixed and ultimately degenerative. 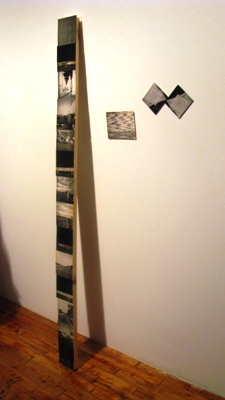 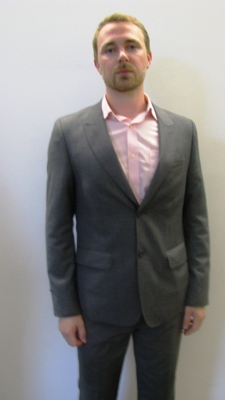 Bryan Graf is an artist at the exhibit whose work is based on his personal life and his home in New Jersey.

Bryan Graf is an artist at the exhibit whose work is based on his personal life and his home in New Jersey. As he remarked to AO, the viewer never gets to see who’s taking the picture. That’s why some of his photographs feature him as the subject, holding up a photogram that is in the process of developing. In this sense, it is a shot/reverse shot. Graf is from New Jersey, and he commented on the duplicity of the state: “It’s called the Garden State, but in a sense it’s a joke.” Power plants are juxtaposed with expanses of green. Graf, however, does not try to only focus on the “good” parts of the state: his family garden or his rural surroundings. One of his pieces is titled Taboo Totem (Interstate) (2010), and its shape is true to its name: it is a long, rectangular strip of cardboard that lay against the wall of the gallery. It featured pictures taken on the New Jersey interstate, “one of the most heavily traveled areas in the country.” In one photo, a bird rises from the cement, struggling to escape the cars and fumes; in another, green grass lies trapped under cement columns. In this sense, Graf is very objective, giving equal attention to both nature and man-made material. 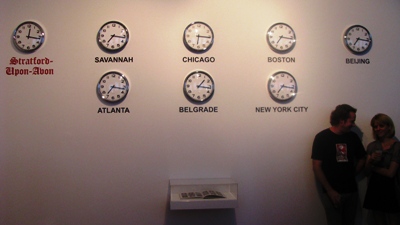 Erin Dziedic, a curator at the exhibitor, focuses on the “successes” and comparative “failures” of the contemporary art world as they relate to those in William Shakespeare’s time. One of his pieces, Chorus (2008-2009) by Craig Dennen, is a row of clocks that display the local time at eight different locations: Stratford-upon-Avon, Beijing, Chicago, Boston, Savannah, Atlanta, Belgrade, and New York City. Through these clocks, Dziedic draws a connection from Shakespeare’s world to ours. In the past, Dennen has focused on Shakespeare’s play Timon of Athens, considered to be a failed piece. Dziedic and Dennen attempt to draw a connection between this failure and more recent ones. The clocks show that while Shakespeare is dead, his birthplace still exists, and time still passes there. 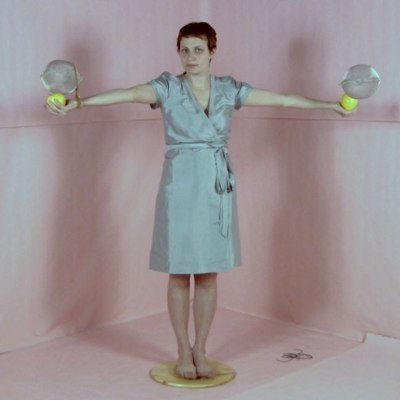 Stamina Gregory’s exhibit of choice is Quantum Limbo, which states that two things cannot be calculated at once. She chose a video of a woman balancing an green apple and a wired ball in both hands (Fundamental Constants [2010]). It is hard to focus on both objects at once, and the viewer has to switch from one to the other, as though he were watching a tennis match. This art, then, suggests that it’s impossible to measure or to focus on two objects at the same time, and that divided attention is not necessarily better attention. 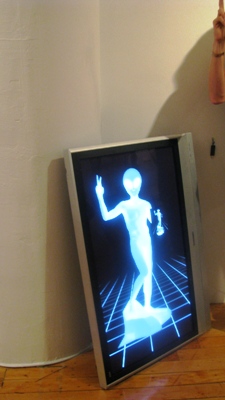 James Shaeffer’s choices focus on contemporary art’s place in the world of technology, and more specifically, the increasing ability to destroy original work through file sharing and the like. His pieces were especially noticeable in the exhibit. Monitors featuring glowing aliens were placed around the gallery. These acted as “foreigners,” or foreign technologies, that were weeding into the more material and human world. 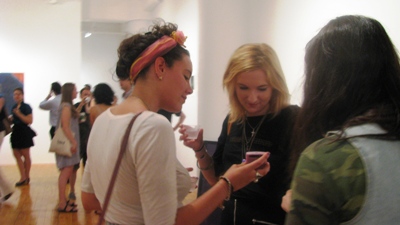 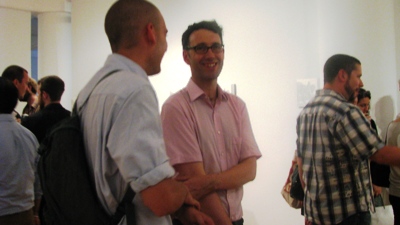 The exhibit was true to its spirit. By inviting many curators – not just one – it opened itself to a variety of ideas and themes. These ranged from technology to Shakespeare to aliens. It can be noted that the exhibit focused on “imperfectness:” the failures of Shakespeare’s time as compared to ours, the well-publicized flaws of New Jersey and the desperate collapse of the housing market. However, the exhibit was not depressing, but uplifting; it reminded us that the world has problems, but that we are still capable of making these problems into art – and hopefully using this art to find a solution. 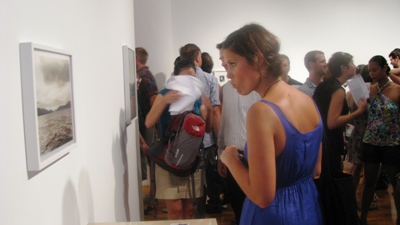 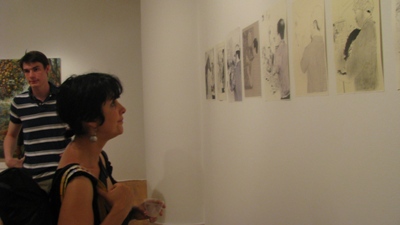 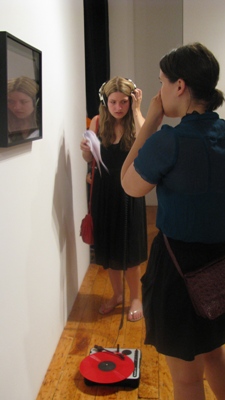 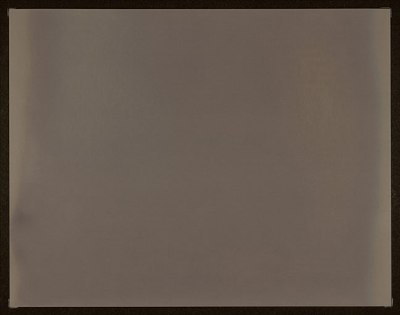 The Sun Room (Direct Light) by Bryan Graf, via PPOW 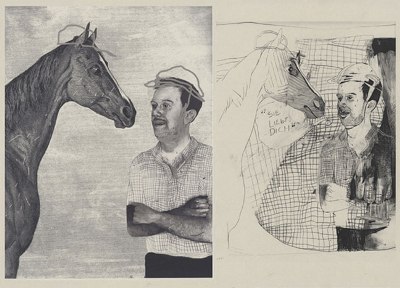 AO: What inspired you two with the title?

Andrew: The idea was finding these different artists that were working with these kind of modernist devices. In Phil’s work, there’s this reference to the monochrome, which is something you see popping up over and over again. But he’s doing it in this really personal way. They’re sort of damaged; if you look at the print, it’s coming off the frame in an intimate way. The closest parallel to that is Alexandra Spaulding work’s. This sound piece, I’ll Stab you in the Back. It’s monotonal but really textured sound, and it aligns with Phil’s work, and it’s great they’re being shown together. And there’s Liza’s work, which is taking this completely sterilized glass minimalist device, and shattering it and breaking it apart. Liza’s day job is at an art shipping company, and they do installs and logistics. She actually worked with a pedestal exactly like that that was for an installation of a big name artist, and that was like the pedestal of the work that that artist made would be placed on. So she had one fabricated exactly like that. So if you think of a black box as a minimalist sculpture, it’s being used as a pedestal and she’s shattering it. She’s dealing it with a highly personalized way, which becomes an act of breaking it apart. Erik works at a studio in Harlem doing these incredible abstractions and it’s this private act of creation, like any work of art being created. In something in Phil’s that looks so blank, and something with Alexandra’s that looks so incredibly heavy, it’s [a kind of] private language that’s being expressed, but we’re forced to deal with it in this sense of public discourse.

AO: What inspired you with the title?

Gabriella: Well I think it started with the housing crisis and the instability of built environments. I wanted to explore the different spatial situations that were created and not really defined by physical materials. In exploring this material, I wanted to look at different artists who work with intangible and ephemeral materials to create these forms in space. I looked at sound artists, people who deal with movement. It’s referred to as performance artists. Movement is an extension of this immaterial idea, because they’re shaping and framing space, but also moving through it, so it’s an idea of taking over and defining different spatial environments, but moving through it. They’re not fixed themselves.

AO: Is that what humans do in general or more controlled?

Gabriella: It draws attention to what humans do in general, more so, and they’re practicing to find those in-between spaces that we wouldn’t normally pass through. There’s a cone area [in the gallery] that is an in-between zone, and I think it’s a pass-through space, and they’re conscious in trying to activate that space.

AO: Are they centered around that?

Gabriella: No, they’re all around, but they’re drawing attention to a space that is normally a passage.

AO: What made you decide on just one work?

Gabriella: Limitations of the space. I wanted to do more but I had no more room. The artists I was looking at had their own immersive environments that are required. They can’t co-exist in one room, so I thought, OK, if I’m going to work with these limitations, I can choose only one artist who is space defining.

AO: It must have been hard. How did you choose?

Gabriella: In choosing Jan, I really had to focus on artist who represented the idea best, and how I arrived at him was that he deals a lot with architectural spaces and situations and their flux. And I thought that that was the most important part of the idea and because my starting point was the instability of space, and you can take that literally or metaphorically. We move through spaces all the time. We’re not fixed in space; we have architecture that defines what we do but we also have our own definitions within that. I thought thath e closely addressed that issue, whereas the other artists were more specifically oriented towards sound, or light, or movement. He sort of conceptually defined it for me.

AO: You actually have two things at the exhibit. Where are the dancers from?

Gabriella: Douglas Dunn is the choreographer, and I give full attribution to him…he’s been choreographing since the ‘70s. I don’t have their bios memorized, but they come from various parts of the United States, and they all work in New York now.

AO: They’re eerie and cool at the same time.

Gabriella: It worked to have their movements dispersed in space. It wasn’t about being confined in a room.

This entry was posted on Friday, July 23rd, 2010 at 8:02 pm and is filed under Art News. You can follow any responses to this entry through the RSS 2.0 feed. You can leave a response, or trackback from your own site.