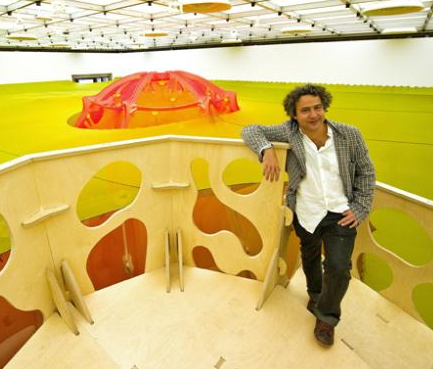 Ernesto Neto, posing on a landing in the interior of “The Edges of the World,” 2010, courtesy of the Independent.

Internationally renowned Brazilian artist, Ernesto Neto, launched Festival Brazil with his exhibition “The Edges of the World” at the Hayward Gallery in the Southbank Centre. The show, which Neto has been planning for over a year, is said to be the artist’s most ambitious exhibition to date. “The Edges of the World” consists of a series of interconnected site-specific installations in the Hayward’s two main galleries and on its three sculpture terraces. The Independent called Neto’s exhibition a “dazzling playground for adults.” A visit to the show is indeed an interactive experience as viewers are encouraged to engage with their surroundings and each other. 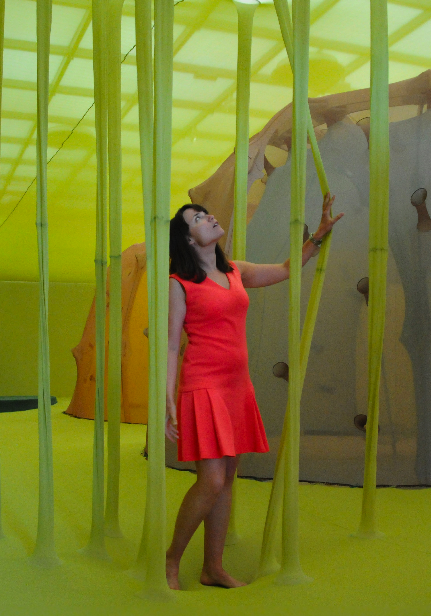 Ernesto Neto, the interior of “The Edges of the World,” 2010, courtesy of Fad.

Prior to “The Edges of the World,” the Hayward Gallery was closed for a sixth month renovation. The Hayward has a history of holding shows for adventurous and innovative artists. It is quite fitting that the curator, Dr. Cliff Lauson, would choose to reopen the space with “The Edges of the World,” a risk taking show that addresses spatial concerns, specifically how humans exist physically and emotionally.

Neto’s installations develop an experience for the viewer that is both physical and social by giving the viewer the opportunity to touch, smell, lounge and even bathe. The viewers are thoroughly engaged in their surroundings and each other, creating a time sensitive perspective that is different for each guest. Neto describes some of his work as “Humanoids,” or art that “wears the viewer.” All of the viewer’s senses become part of the work when they fully engage in Neto’s instillations, which incorporate spices and a wide variety of colors and textures.

Neto and Lauson designed the exhibition in a way that visitors must walk a specific path and view the installations in a defined order. The show begins with a work that is constructed of a series of laser-cut wall drawings. At first glance this work appears to be a jumble of lines, but upon studying the orientation of the lines it becomes clear that the work resolves into a complex street map mimicking London’s anti-grid formation. The show has a lot to do with the modern idea of urbanism. Neto is combining many of conflicting elements that exist in one’s physical and emotional modern life. After physically locating their bodies, visitors proceed to locate their psyche.

The next installation in the show, titled Circleproteitemple, represents the heart. Neto has constructed a large red pod that viewers are invited to go inside. The interior is equipped with a drum set for guests to play while the pod pulses to its on distinct beat.

The indoor part of the exhibition includes hundreds of yards of fabric, which are cut and stitched by hand. This stretchy opaque nylon is died in bright acidic colors and ultimately used to mold, mask, shade, and reveal the structures and forms in the show. The final indoor installation that viewers encounter is a labyrinth of tunnels and pods. Neto intended for this installation to be experienced barefoot so that visitors may jump on the bouncy surface and drop into the abyss as it leads towards the outdoor portion of “The Edges of the World.” 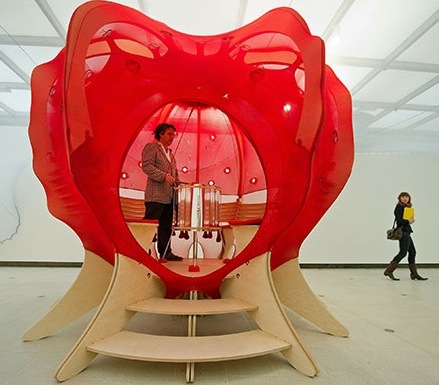 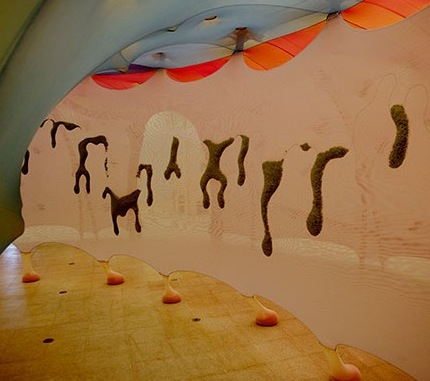 Ernesto Neto, Breathing the Voyage, 2010, courtesy of the Guardian. 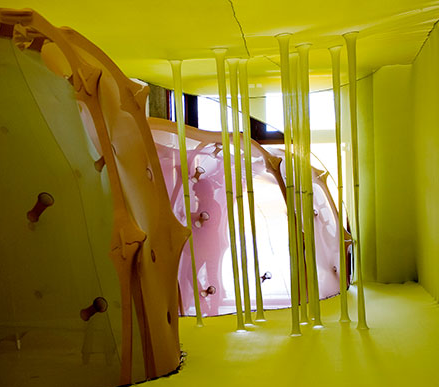 Neto transforms the Hayward’s three outdoor terraces into public parks making a grand statement for his first outdoor installations. The first terrace is a garden pathway. The path is in the shape of an infinity symbol, raised from the ground, and enclosed in a red nylon box. Two trees neatly line the path adding greenery to their concrete surroundings. One is a palm tree, indigenous to Brazil, Neto’s homeland, and the other a hawthorn, indigenous to the United Kingdom, the home of the exhibition. The high-wire artist Philippe Petit inspired this installation.

The second terrace is reminiscent of a pool yard. This work is titled H20-SFLV. Here Neto has constructed a raised pool, which holds sixteen swimmers. The swimming pool structure is accompanied by two huts for swimmers to change their clothes. Admission to the pool is free, but must be booked in advance.

The third terrace was designed as a sculpture park. This instillation displays a relatively new direction in Neto’s work. He has recently begun experimenting with Corten steel to create large-scale sculptures. This sculpture, which is displayed in “The Edges of the World” for the first time in London, is inspired by a 1960’s children’s toy. While visitors explore the terraces; they animate the artwork through their participation whether they are submerged in a sculptural pool or balancing on an undulating path. 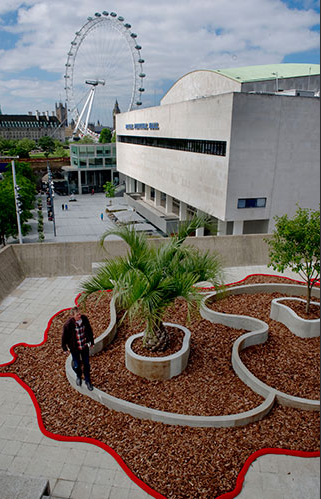 Ernesto Neto, garden pathway in “The Edges of the World”, 2010, courtesy of the Guardian. 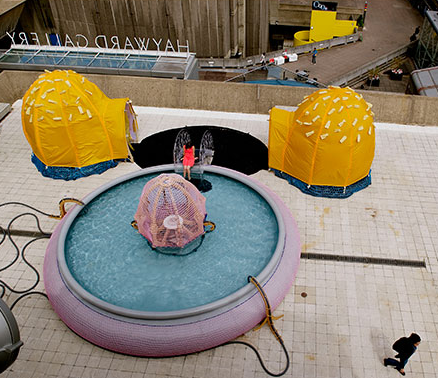 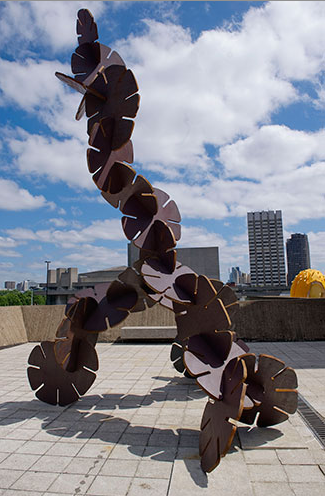 Ernesto Neto, steel sculpture in “The Edges of the World”, 2010 , courtesy of the Guardian.

Neto aims to get viewers to use all their senses when visiting “The Edges of the World” by incorporating a wide variety of colors, spices, and materials. He is very interested in constructing many simultaneous events in a concentrated space. While Neto’s work is technically abstract, the artist’s main concentration is the body. By combining his interests in cultural history, physics, and anthropology, Neto has created an exhibition that incorporates themes such as human contact, relationships, time and space.

An exhibition titled “New Décor” is simultaneously occurring on the gallery’s lower level. This show is also as a part of Festival Brazil. It is an international survey of thirty contemporary artists whose work explores interior design as a means of engaging in the changes in contemporary culture. Neto is showing work in “New Décor” as well.

In the last decade, Brazilian art has encountered a unique transformation. Its popularity began in a conventionally modernist way with abstract geometrical work. This style began to intertwine with the culture’s interests in the libido, human sexuality, and social complication. Neto believes that these popular themes stem from Brazil’s yearning for an identity and desire to become Western. The artist himself is interested in the idea of constantly changing oneself. His birth name is Ernesto Saboia de Albequerque, but he calls himself Ernesto Neto because Neto, meaning Grandson in Portuguese, was once his nickname.

Neto was born in 1964 and he currently lives in Rio de Janeiro. He has held major solo exhibitions in New York and Paris and has participated in the Carnegie International (1999) and the Venice Biennale (2000). Prior the “The Edges of the World,” Neto’s largest work was Anthropodino, which he created for the Park Avenue Armory in New York. His career began in sculpture an before becoming an artist he considered paths in both engineering and astronomy. Neto is currently considering diverging into permanent architecture. The artist’s innovative technique of encouraging viewers to interact with his work is hugely influential to emerging Brazilian artists and has become a popular theme in Brazilian art. “The Edges of the World” is believed to be on of the biggest and most impressive exhibitions of 2010.

This entry was posted on Saturday, July 3rd, 2010 at 1:00 am and is filed under Go See. You can follow any responses to this entry through the RSS 2.0 feed. You can leave a response, or trackback from your own site.