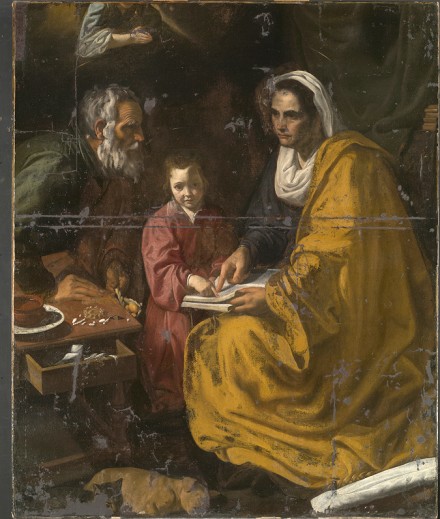 The Education of the Virgin, circa 1617, oil on canvas, which was recently reattributed to Diego Velázquez, at the Yale University Art Gallery. Image courtesy Yale University.

Just days after a Caravaggio masterpiece that had been stolen two years ago was recovered in Berlin, Yale University reported today that they have discovered a painting in their museum’s storage which could be attributed to 17th-century Spanish painter Diego Velázquez. In a statement released from the university, they relate that the discovery was made in the midst of a “multi-year preparation for a major renovation and expansion currently underway.”

In a thorough review of their vast holdings, this unsigned painting seems to have slipped under the radar, having been previously attributed to an “unknown 17th-century Spanish painter.” The work was donated to the Yale University Art Gallery in 1925 by two brothers, wealthy Yale alumni Henry and Raynham Townshend, whose family, from New Haven, had owned it for more than 40 years. At the time of donation, the provenance reports stated that the painting was 300+ years old and in poor condition, but after six years of recent study, the work has now been reattributed to the Spanish master himself, whose Las Meninas (1656) is one of the jewels of the Prado Museum in Madrid, Spain. 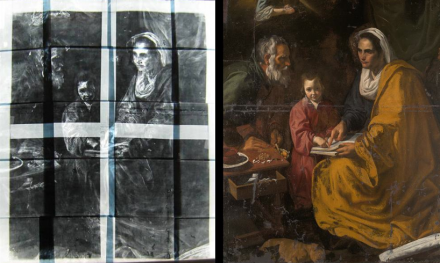 A side-by-side comparison of the x-ray of The Education of the Virgin and the painting itself. Image courtesy El Pais.

Jon Marciari of the San Diego Museum of Art is the expert who has identified the painting in question as belonging to the early period of Velasquez. His report in the  July-Sept 2010 issue of ars Magazine details the defense, and is available through the magazine’s website (in Spanish). The painting is meant to depict the Virgin Mary as a young girl, learning to read. He dates the painting to around 1617, when the artist was 18 years old and still living in his native Seville. According to The Guardian, Marciari “compares the painting to The Luncheon, a Velázquez that hangs in the Hermitage Museum in St Petersburg, Russia. He points to similarities in style, to the way faces and figures emerge from shadows and to the still life elements included in the painting – which was probably commissioned by a local church or convent.”

Diego Rodríguez de Silva y Velázquez (June 6, 1599 – August 6, 1660) was the leading artist in the court of King Philip IV. Gaining his importance as a portrait painter for the court, the artist also rendered notable European figures and commoners.

As for the condition of the painting, it has incurred damage since its bequest. According to Spanish newspaper El Pais, the canvas has scratches, paint has been rubbed away in several areas, and it has been truncated at the top and bottom. An x-ray taken of the work reveals that it was mounted in a similar way to other early works by Velázquez. Marciari speculates the water damage incurred was by the flood of 1626 in Seville, and the rest due to poor storage conditions at the Museum’s basement. However, the restoration work will not begin until more experts endorse authorship of the Spanish master. For now, at least, the Prado reserves judgment. 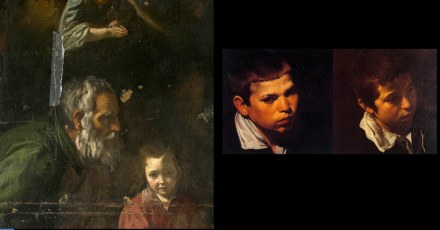 Despite the debate about the authorship of the work, there are clear similarities of style and technique, as well as recurrence of themes from both the work in question and other verified paintings of Velázquez. For example, the artist’s treatment of children’s faces is comparable in the face of the Virgin (left) and faces of other children, like the one in Old Woman Cooking Eggs (center) or Lunch (right). 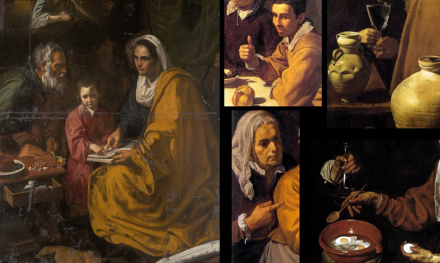 Details from the report. (Clockwise on right) The Water Seller of Sevilla, Old Woman Cooking Eggs, Christ in the House of Martha and Mary and Lunch. Image courtesy El Pais. 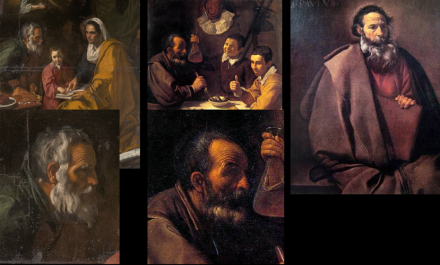 As with the treatment of children, portraits of maturity are also found to be similar. In the lower left, is a detail of the character of San Joaquin in Education of the Virgin. Next to him is a character of Lunch, and to the right, San Pablo. Image courtesy El Pais. 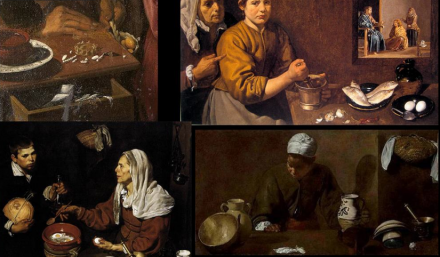 Daily life, as seen by Velázquez in four of his works. Top right is a detail of The Education of the Virgin with Christ in the house of Martha and Mary. At the bottom right are Old Woman Cooking Eggs and La Mulata. Image courtesy El Pais. 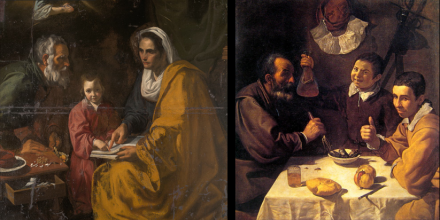 Education of the Virgin side by side with The Lunch, in the early Seville days of Velázquez. Image courtesy El Pais.

In July of 2007, a Velázquez painting sold at Sotheby’s in London for circa $17 million. Marciari commented that although he doesn’t know how many millions the Yale discovery would command at auction, that day will not come. “The painting will be forever at Yale,” Laurence Kanter, Curator of European Art at the Yale University Art Gallery, said. In a telephone interview with Philip Boroff of Bloomberg, he shared, “This is thrilling for us. This is one of the most important discoveries in the old-master field in decades.”

The discovery began in 2002, when the gallery was preparing for renovation and paintings were transferred to off-site storage. Kanter said the “Virgin” painting, of high quality, caught his eye. “John Marciari, a Yale-educated art historian working for Kanter, said he too was struck by the long brush strokes, gesturing hands and sophisticated naturalism. ‘One day it hit me,’ he said. ‘It couldn’t have been more obvious. That’s early Velázquez.’ Marciari, in his early 30s at the time, said he spent weeks trying to convince himself otherwise before he told anyone of his theory. Finally, he sent an image via e-mail to a Velázquez scholar he knew, Salvador Salort-Pons. There was a reply within a minute. ‘I am trembling,’ Salort-Pons wrote. Years of academic and technical research followed.”

This possible discovery could not have come at a better time: according to an article in Bloomberg, Yale University “saw its investments fall about 25 percent in the year ending in June 2009 as the economy tanked.” The article seems to conjecture that it was convenient that the university “happened upon an appreciating asset in a storage room underneath its art gallery,” but the verdict on the origin of the painting is still out.

Until then, the painting is being studied for conservation treatment and is not on view. The university will gather the opinions of other experts to see whether they agree with Marciari’s analysis. Kanter said it will be ready for public viewing in about two years, and an article detailing the discovery will be published in the next printed issue of ars Magazine.

“I’ve spent seven years playing devil’s advocate, to convince myself it’s by someone else,” Kanter says. “I feel certain it’s by Velázquez.”

This entry was posted on Saturday, July 3rd, 2010 at 1:02 am and is filed under Art News. You can follow any responses to this entry through the RSS 2.0 feed. You can leave a response, or trackback from your own site.