Go See – London: Polly Morgan on show for ‘Psychopomps’ at Haunch of Venison until September 25th 2010 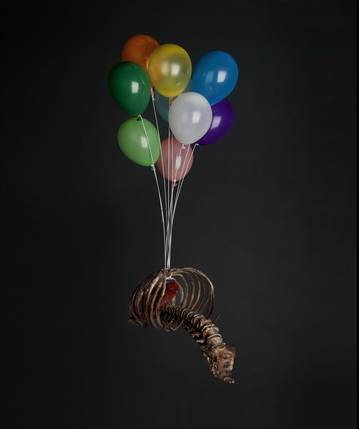 Atrial Flutter (2010) by Polly Morgan, via Haunch of Venison

Currently on view from today until September 25th, 2010 is an exhibition of works by Polly Morgan, a British artist known for her fascination with taxidermy. The exhibition is Morgan’s first solo show at  Haunch of Venison in London. Morgan has been interested in animals since a young age; after college, she experimented with films and sculpting before she finally turned to taxidermy. Her animals are well-known because she often places them in unusual and unrealistic situations. 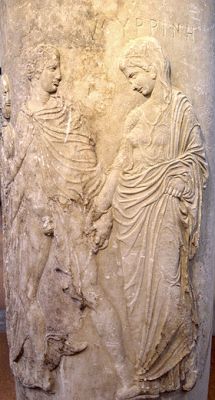 A depiction of psychopomp Hermes, via Wikipedia

Morgan’s current exhibit is titled Psychopomps, which derives its name from the mythological creatures who accompany humans from this world to the next. The gallery’s website also drew a connection between these creatures’ ability to “revive the dead” and the fact that the animals in the exhibit are lifeless. The pieces in the exhibit follow the same mythological theme. There are four in total: sculptures reportedly “poised between metamorphosis and flight.” The title, then, is fitting, as it describes a crossing of worlds. The references in the exhibit abound: from shamans to Greek gods, they demonstrate Morgan’s depth and love of expansive learning. 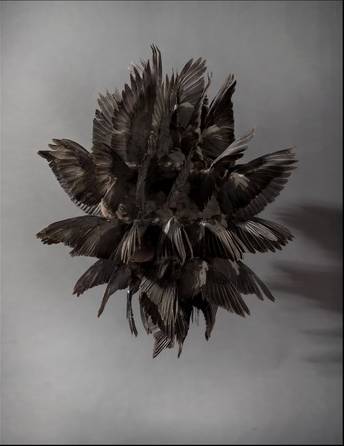 Blue Fever (2010) by Polly Morgan, via Haunch of Venison

Morgan’s preference to put these animals out of their natural habitat is especially shown in this exhibit. Blue Fever (2010) is a suspended mass of bird feathers. Only the wings are visible, and each set is facing out, as though the heads are converging in the middle. It would be extraordinary – impossible – to see such a scene in the wild. At the same time, the piece is very natural and indicative of bird behavior: clustering and flocking. 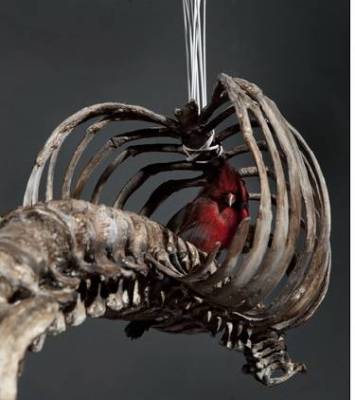 Atrial Flutter (2010) (closeup) by Polly Morgan, via Haunch of Venison

Atrial Flutter (2010) is perhaps the most bizarre work in the exhibit. Rainbow balloons hold up what looks to be like a ribcage and the skeleton of a snake winding through the cage. The description of the work mentions a “taxidermy cardinal,” and sure enough, as the viewer moves closer, he can see a cardinal sitting on top of the “snake.” Atrial Flutter is a tough work to decipher. It contains so many contradictions: the weightlessness of the balloon, the heaviness of the snake and cage, and ultimately the cardinal, who is both trapped and free – and therefore recalls Maya Angelou’s masterpiece I Know Why the Caged Bird Sings. 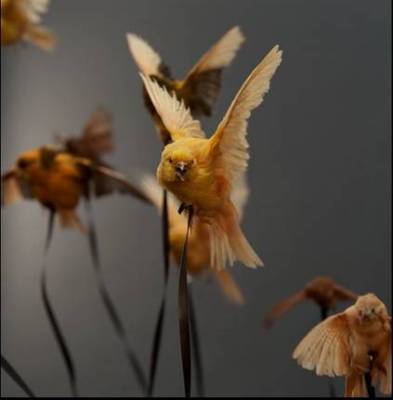 Systematic Inlammation (2010) (closeup) by Polly Morgan, via Haunch of Venison

Born in 1970, Morgan is a new artist who has quickly jumped onto the British cultural scene. As a settled artist, she can now focus fully on her work and make for herself a clear position in the art of taxidermy. This exhibit at Haunch of Venison ultimately brings her work to the next level. Unlike other artists who work with animals, she gives viewers an arguably more authentic experience.  Hopefully, as the viewer examines her pieces, he won’t mourn or be disgusted by these animals; instead, we all should appreciate Morgan’s efforts to immortalize them.

This entry was posted on Thursday, July 22nd, 2010 at 8:29 am and is filed under Go See. You can follow any responses to this entry through the RSS 2.0 feed. You can leave a response, or trackback from your own site.