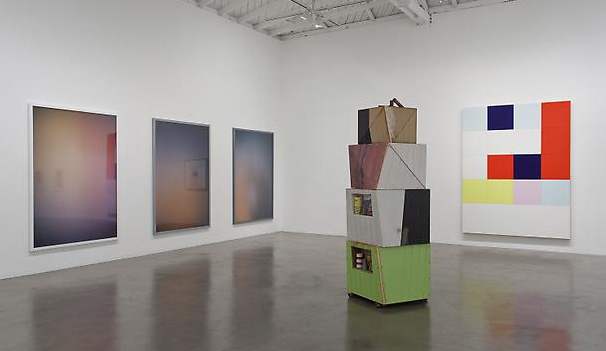 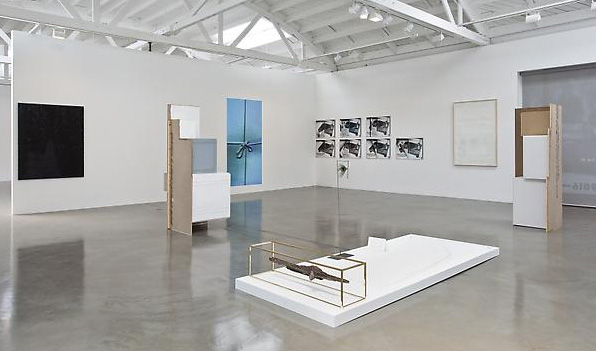 Beshty references the idea of ‘late style,’ a phenomenon whereby the hollowness of the contemporary landscape raises questions about the viewer’s expectations for an honest experience of art, architecture, and to a certain extent, life. The terms ‘Picture’ and ‘Industry’ play important roles in determining the contextual premise of the exhibit, as interpretations for both ideas are quite varied, especially in Los Angeles. Beshty explains “Pictures have a knack for supplanting the concrete, sliding as though self-lubricating around the globe, like poltergeists; they haunt the world they represent like vague recollections, inhabiting concrete forms briefly until slipping off to another host… And what to make of the application of the term industry, with the heaviness of factories and smoke stacks encircling it, to the production of ephemeral pictures whose power is synonymous with their lightness? It could be said that it is the seemingly invisible and ephemeral aspects—the means of distribution, the contextual frame, the vicissitudes of taste, and an object’s ability to “pass”—which serve as the most robust material of the contemporary work, an embrace of convention that produces an endless sequence of provisional “meanings.” Perhaps the only solution available to us is to allow pictures to be concrete, to reclaim their moments of heaviness, instead of pretending that they are endlessly able to float listlessly in the breeze.” 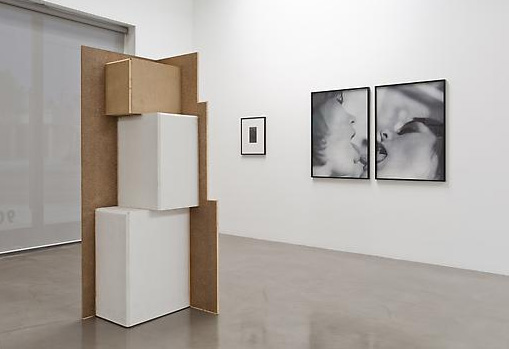 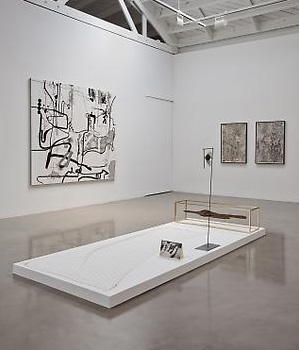 Immigration Reform: The Phone Call Heard Around the Country

La Prensa San Diego November 25, 2009 | Ballv?, Marcelo NEW YORK-Organizers described them as immigration reform “house parties.” Across the country recently, in churches, schools, immigrant support centers and private homes, backers of immigration reform gathered around telephones (the speaker phone turning the device into a defacto radio) as Hispanic U.S. legislators laid out the strategy for pushing a reform of the immigration system in 2010.

In effect, the event was a massive conference call, connecting thousands of immigration reform supporters to one another and to Washington, D.C. decision makers.

The “house parties” came less than a week after Homeland Security Secretary Janet Napolitano said the White House was preparing to push the U.S. Congress on immigration reform early in 2010.

On the call, the legislators urged listeners-16,000 telephone lines were active during the event, and translation services were provided for tens of thousands of participants-to call their members of Congress and ask for action on immigration reform. immigrationreformnewsnow.net immigration reform news

The immigrant organizers who spoke on the call urged listeners to call their legislators and use their cell phones to text the words “Justice” or “Justicia” to the number 69866. In the coming months, they would receive, via cell phone, updates about actions they might take to advance immigration reform.

The call, organized by the Washington, D.C.-based Reform Immigration for America campaign, a coalition of pro-reform organizations, was first conducted in English, and 15 minutes later, in Spanish.

Reps. Grijalva, Gutierrez and Vel??zquez spoke on both calls.

At Make the Road New York, an immigrant services center in the Jackson Heights section of Queens, the first call was heard during an evening English class, the phone on speaker mode placed on a chair in the middle of the room.

“We’re going to make sure that the families that were broken by our system have a pathway to reunification,” said Rep. Gutierrez, near the end of the call.

Pietro Idrovo, a 43-year-old Ecuador-born welder, was among those in the classroom.

Although some of his classmates were undocumented immigrants, Idrovo said he was a U.S. citizen and had voted in U.S. elections since 2000. see here immigration reform news

He said the call had made him feel more engaged with the immigration issue. “Since I came to this country, I’ve been hearing about immigration, but I had never paid that much attention because I came in legally and I’m a citizen,” he said. “But that doesn’t change this fact-I’m an immigrant too.” After the call, the English teacher scrawled a list of items on the writing board, while her immigrant students, young and old, looked on.

“Call Congress,” the teacher wrote. Below that, she wrote, “Text Justice.” The students dutifully took notes and began pressing the keys on their cell phones.

Meanwhile, the twang of guitars and wheeze of accordions drifted in from a nearby room-a neighborhood music group was meeting at the same time.

Then the teacher read out the phone number to powerful New York Sen. Charles Schumer and urged her students to give him a call. Again, the students put their cell phones to work.

Fifteen minutes later it was time for the call in Spanish. Some 50 to 60 immigrants were gathered in a large, brightly painted room, and members of the center’s staff handed out plates of arroz con pollo and beverages.

During the call, participants from far-flung states like Arkansas and Iowa dialed in and asked questions of the legislators.

The call to action was repeated: Immigrants should prepare for a concerted grassroots push on immigration reform in the first half of January.

“We ‘re committed to having immigration reform be considered by Congress in the next few months,” said Rep. Vel??zquez.

Among those drifting out of the room after the call was Rosa Y., a 34-year-old Ecuadorean who did not want to give her last name because she does not have papers.

She said she had two children in Ecuador whom she had not seen in nine years, and was mainly interested in immigration reform to have a chance to be with them.

“They should give us a chance to get our papers, so that we can work and help our children get ahead,” she said.

This entry was posted on Sunday, August 8th, 2010 at 1:00 am and is filed under Art News, Galleries, Go See. You can follow any responses to this entry through the RSS 2.0 feed. You can leave a response, or trackback from your own site.