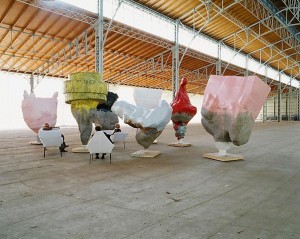 I see my works as quite compatible with a l’art pour l’art philosophy. One may think that I try to take the art object out into the world since my works sometimes appear to have a practical function, but really it’s the other way around: things in the world can, under certain special circumstances, enter the realm of art.

Currently on view at Gagosian Gallery in Rome is Franz West’s “Roman Room,” an exhibition of new sculpture by the Austrian-born artist. In this body of work, West transforms basic shapes into irregular, large-scale structures. He incorporates visual elements derived from performance art, as well as classical art and sculpture. 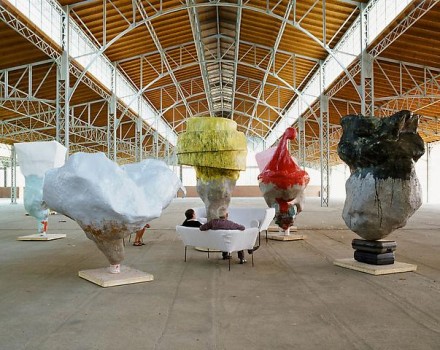 Echolalia (2010) is a work comprised of seven painted totems, made from papier-mâché, polystyrene, cardboard and other objects. Each form is presented as a stacked structure, rising alternately from trash cans or ready-made pedestals. The sculptures appear to struggle for balance and equilibrium. They can be viewed from sofas which West has situated within their midst, in order to explore them from various angles, and at a leisurely pace. 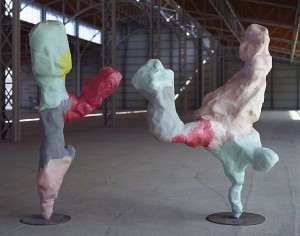 In Caino va Incontro ad Abele (2010) West uses two figures to re-create the biblical story of Cain and Abel. Made from steel and epoxy resin, the figures are positioned in opposing stances, and painted in a high-key range of colors. 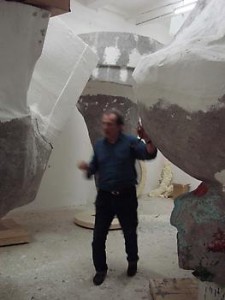 Franz West in his studio, via Gagosian Gallery

Franz West (b.1947) belongs to a generation of artists influenced by Actionist and Performance Art of the 1960s and 1970s. Earlier in 2010, a major retrospective of his work entitled “Franz West: Autotheater” was shown at the Ludwig Museum in Cologne before traveling to MADRE in Naples, Italy. This retrospective will also be on view at the Universalmuseum in Graz, Austria from September 25, 2010 to January 9, 2011.

The Sun – Naperville (IL) October 12, 2011 Cross-town rivals came together in bright pink swim caps to compete and to raise money for a relatively new organization that provides awareness, education and resources for women who are diagnosed with breast cancer.

??I think it?s good for high school kids to understand the importance of giving back and working towards something like this,?? said Mary Eiken, whose daughter Jilian is on the Naperville North swim team.

Eiken helped organize the fundraiser held in September where, at the dual swim meet at Naperville Central, Central and North?s girls swim and dive teams not only purchased bright pink swim caps, but also held a raffle, had a baked goods sale with items frosted in pink frosting, sold T-shirts and collected pledges if they got a time drop at the meet that night. The pool was filled with pink caps while the stands were filled with pink ribbon T-shirts. this web site swim caps

??We have done several awareness meets and breast cancer hits home for so many of our families on the team,?? said Sue Welker, Central?s swim and dive team?s head coach, ??A few of the moms … (have) fought breast cancer so this was a perfect fit this year. Since we are a girls high school team it makes it hit home even more to focus on a female cancer.??

Combined, the over 120 swimmers and divers raised $1,500 for Bright Pink. They chose to fundraise as a way to not only raise money, but also create recognition and awareness for Bright Pink.

Nancy Maxon, who helped coordinate the event with Eiken, has a daughter who swims for Central. Maxon is also a breast cancer survivor who completed treatment in 2006, just celebrating her five-year mark. Her daughter, Krista Drapalik, wrote ??for my mom?? on her cap while swimming with her friends from Central and North.

??It is unbelievably touching to see the girls swim with handwritten names, including mine, on their caps of people they are swimming for,?? Maxon said. ??(It) brings me to tears every time.??

Because there are 200,000 new cases of breast cancer each year, Eiken believes everybody knows someone who has been touched by it.

This entry was posted on Monday, September 20th, 2010 at 1:23 am and is filed under Go See. You can follow any responses to this entry through the RSS 2.0 feed. You can leave a response, or trackback from your own site.