Go See – New York: Louise Bourgeois and Tracey Emin “Do Not Abandon Me” at Carolina Nitsch through November 13, 2010 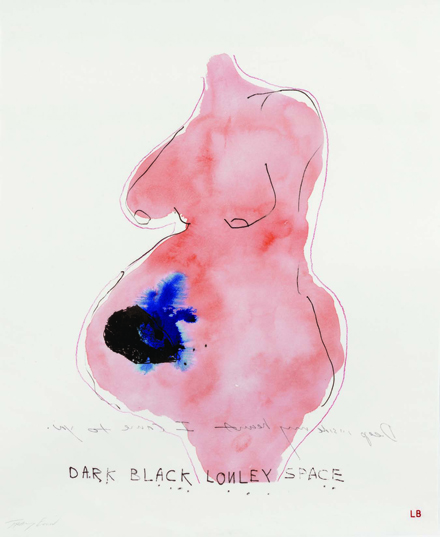 Louise Bourgeois and Tracey Emin, Deep inside my heart, 2009-2010. All images courtesy of Carolina Nitsch Projects.

During the last two years of her life, feminist sculptor Louise Bourgeois (1911-2010) collaborated with the self-revealing YBA artist Tracey Emin on a series of prints entitled DO NOT ABANDON ME, published in an edition of 18 by Carolina Nitsch. Emin spoke of her friendship with the 98 year old artist in an interview with Kisa Lala in early 2010, stating: “I asked if I could meet her, and she said yes. Now we’re doing a collaboration. Louise makes watercolor prints and I do drawings over the top.” The prints use a new technique that transfers the dye from Bourgeois’ original gouache drawings onto fabric, to which Emin added text and drawings in black ink. 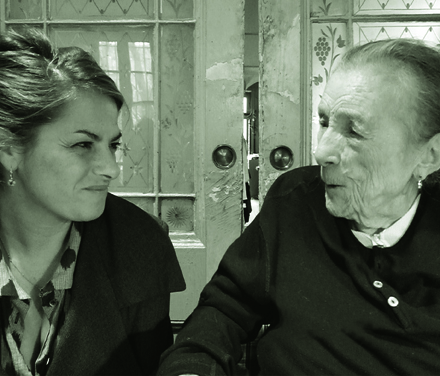 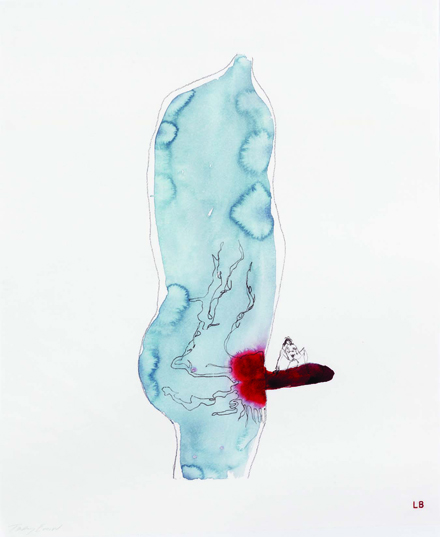 After Bourgeois passed away in May, Emin was interviewed by BBC about her recent collaboration. She stated:

“I had been working with Louise on a collaboration for the last two years. It was a symbiotic thing. Because we both work with our hearts and what actually drives us emotionally, we connected very, very well and I have felt deeply privileged to have been able to work with her. So she’s not really an influence, more of a kindred spirit.

I carried those images around the world with me and every place I went I thought ‘now I’m going to do it, now I’m going to work on them’ and I’d lay them out on the floor and I’d be too scared to touch them. When I did, I was delighted and happy with the results and Louise was as well. It’s really sad to me because we were supposed to show them. We will show them but she won’t be here to enjoy them. Maybe she will from somewhere else, I don’t know.” 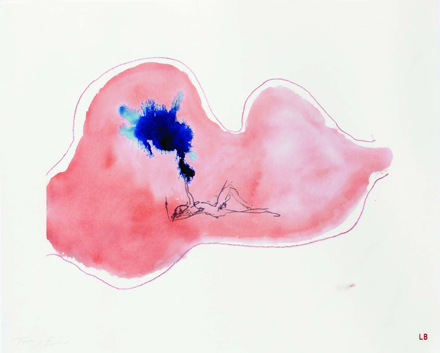 The collaboration between Bourgeois, a first-generation feminist artist, and Emin, a second-generation feminist, shows a continuity between feminist themes, but also uncovers the differences in the means of expressing these very ideas. This can be seen in the way that Bourgeois’ abstracted torsos interact with Emin’s scrawling drawings and brutally-personal texts. The surface of the prints is significant, as both artists have worked with fabric–a medium that represents female labour–extensively. As Emin described, “We both work with recurring themes as well. Things that come again and again into our life, that don’t go away.” A major recurring theme shared by both artists is the female body as a site for both violence and creation as intersected by the sex act. Emin, famous for her work Everyone I have Ever Slept with 1963-1995 (1995), has made her career by opening her personal life to the public as inseparable from her artwork. Emin’s art confronts the viewer with autobiographical texts describing personal, very specific occurrences of her life to relate to the viewer’s own life-experiences. While Bourgeois’s works are similarly personal and psychological, they are more abstract in their visual language; thus both artists use their past in different manners. 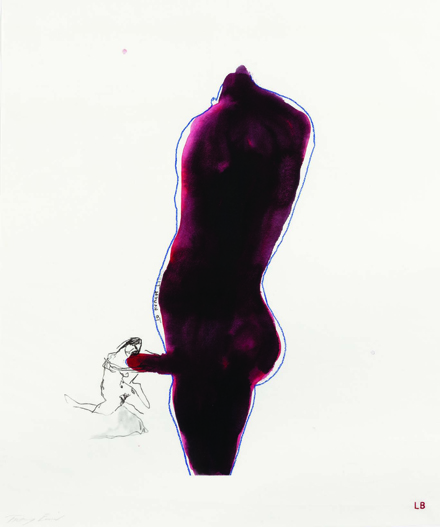 In many of the works, Emin plays with the scale of the gouache torsos by making her additional figures smaller, effectively transforming the body into a landscape; figures fit inside uteruses, and sit atop penises. Emin’s titles, such as I held your sperm and cried (2010), I wanted to love you more (2010) and When my cunt stopped living (2010), add narrative to the works that is at times violent, despairing, and hopeful, as well as autobiographical and all-encompasing. The texts have a range of voices: some are like diary entries, some are like streams of consciousness, and some are similar to poetic slogans. For example, in I just died at birth (2010), Emin fills the body with text that is part religious inquiry, part personal dialogue. The text literally fills the form of the body, metaphorically containing the personal. The title Just hanging (2010), depicting a female nude hanging herself from a penis, adds an element of dark humor to the work. The text threads together the 16 works into a narrative of despairing self-awareness and self-narration. As a whole, the series combines the abstract language of both artists, balancing generational attitudes towards feminism and the body. 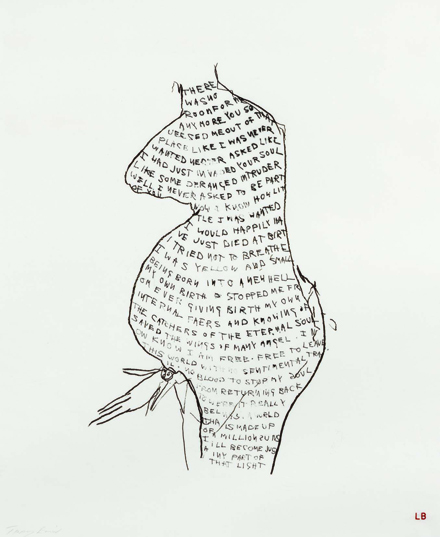 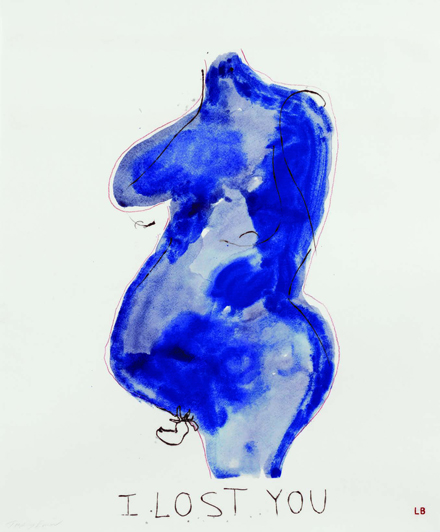 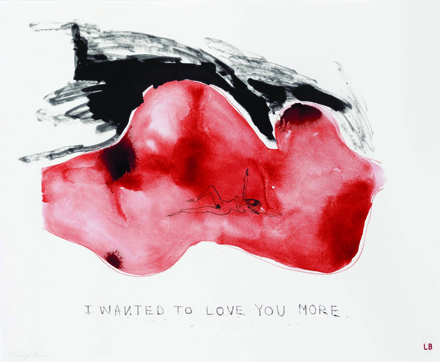 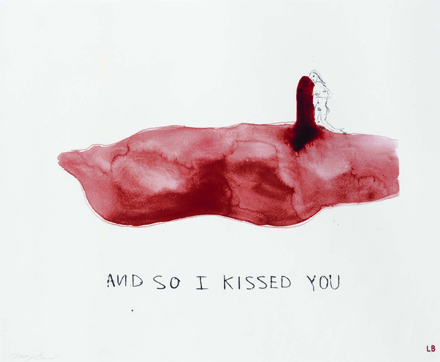 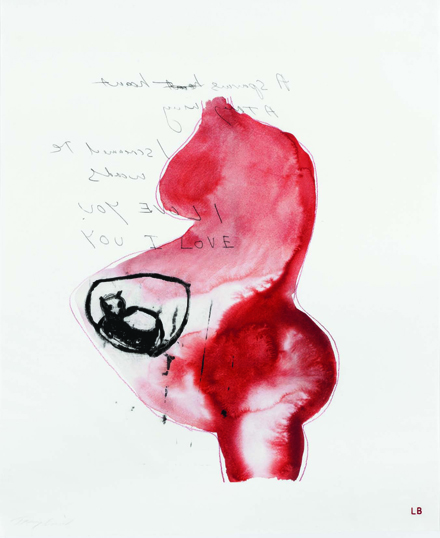 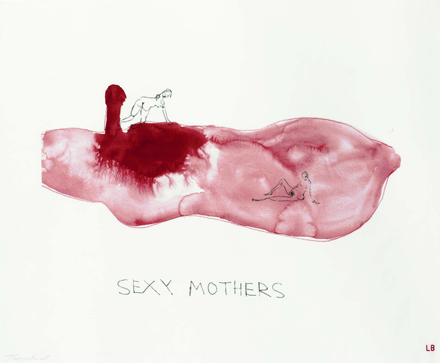 Louise Bourgeois was born in Paris in 1911 and moved to New York in 1938 to pursue a career as an artist, where she worked in a variety of mediums. The MoMA held a retrospective of her work in 1982, the first given to a female artist. Her work has been exhibited throughout the world, including the Centre Pompidou, the Solomon R. Guggenheim, and MoCA, Los Angeles. She died last May at the age of 98.

Tracey Emin was born in London in 1963, and attended the Royal College of Art. Considered part of the YBA group alongside artists like Chris Ofili and Damien Hirst, she was nominated for the Turner Prize in 1999. Her first retrospective was held in the Scottish National Gallery of Modern Art, and subsequently traveled the globe. 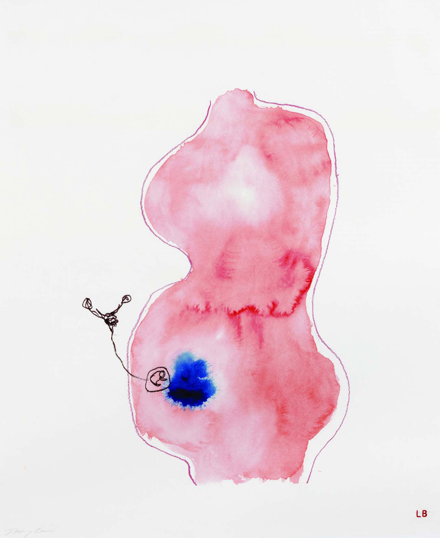 Louise Bourgeois and Tracey Emin, Looking for the mother, 2009-2010 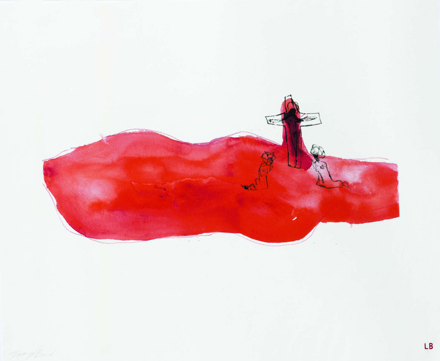 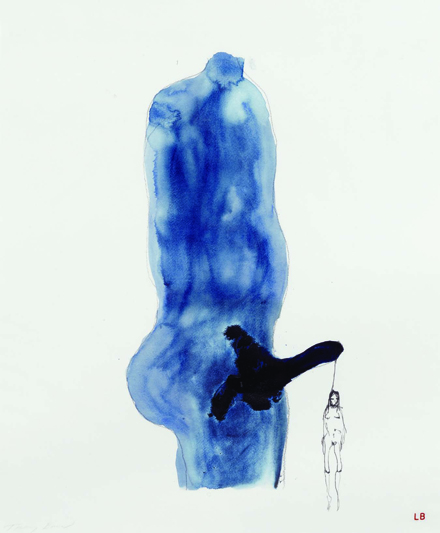 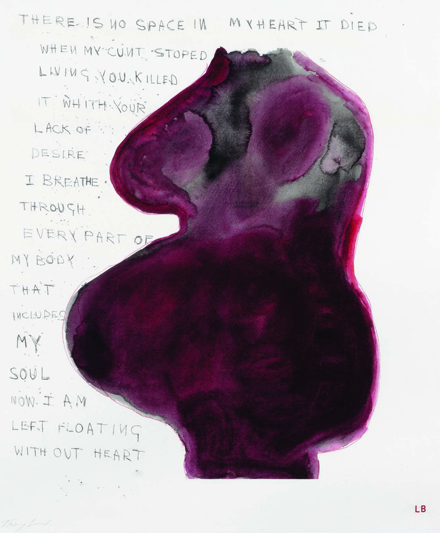 Louise Bourgeois and Tracey Emin, When my cunt stopped living, 2009-2010 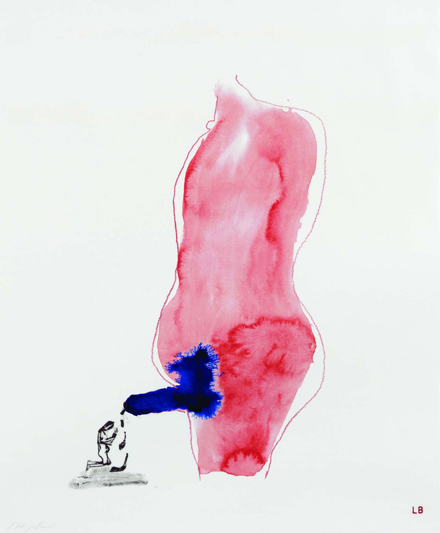 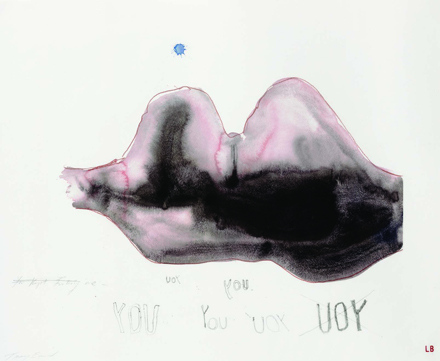 This entry was posted on Tuesday, September 21st, 2010 at 12:22 pm and is filed under Go See. You can follow any responses to this entry through the RSS 2.0 feed. You can leave a response, or trackback from your own site.

7 Responses to “Go See – New York: Louise Bourgeois and Tracey Emin “Do Not Abandon Me” at Carolina Nitsch through November 13, 2010”