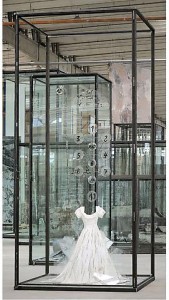 Die Schechina (2010) by Anselm Kiefer, via Gagosian Gallery
There is special border, the border between art and life that often shifts deceptively. Yet, without this border, there is not art. -Anselm Kiefer

Currently on view at the Gagosian Gallery in Chelsea is “Next Year in Jerusalem” by Anselm Kiefer the artist’s first exhibition in New York since 2002.  This has exhibition is in the largest of the Gagosian galleries and has been met with acclaim in the critical press.  The exhibition blends film making, performance and photography as well as history and religious thought into powerful installations with a message. The works focus on Occupations, where Kiefer transforms a series of photographs from 1969 where the artist appears making the  Hitlergruß in front of a significant European cultural monument. 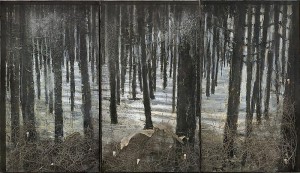 Occupations is composed of a steel enclosure wherein there are seventy-six newly printed large-scale photographs which are mounted on lead and hung slightly apart from each other on thick metal hooks. The viewer catches only a glimpse of the works inside through the open doors of the container but can sense the presence of a greater mass of images. The work reminds the spectator of the atrocities man is capable of committing; the piece re-enacts a dark moment in history in visceral confrontation with present reality. 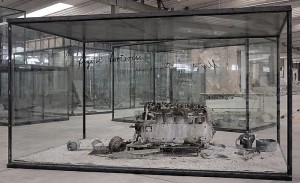 Kiefer has placed glass and steel vitrines more than twenty-feet tall around Occupations. Each vitrine contains organic and inorganic material such as cotton dresses, palms, brushes, burned books and airplane fuselage with titles placed on the glass of each work as if they were some commemorative ritual object. 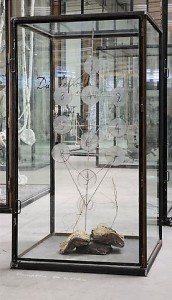 Lead is an item which contains a particular ritual and historical reference for the artist. In Valentius,  a work named after the 2nd century Gnostic theologian, lead buckets and chains are placed alongside synthetic diamonds and wire. In Die Schechina, a white dress pieced by numerous glass shards appears on an invisible figure. The work is in reference to one of the ten Kabbalistic markers of spiritual presence. 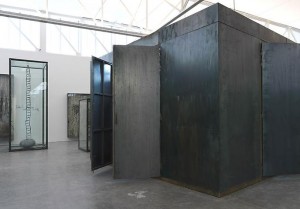 Lead is an item which contains a particular ritual and historical reference for the artist. In Valentius,  a work named after the 2nd century Gnostic theologian, lead buckets and chains are placed alongside synthetic diamonds and wire. 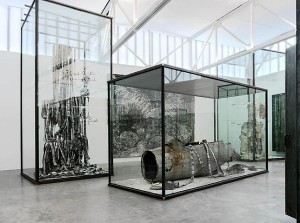 Large landscape paintings made from ash, snakeskin, and other earthen materials hang on the walls depicting mountains, forests and the sea. Fitzcarraldo is made of four panels and portrays a winter forest scene and a lead U-boat in reference to the late 19th-century Peruvian rubber baron Carlos Fitzcarrald who is so famously moved a thirty-ton boat across an isthmus to avoid treacherous circumstances. The work is encased in a large vitrine bestowing it with greatness and reverence. 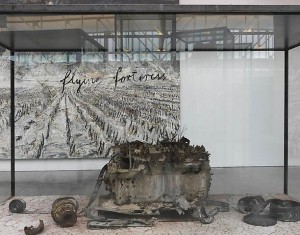 Next Year in Jerusalem is a monumental archive of works which give history a present form and memory. The exhibition brings together references from the Old and New Testament, the Kabbalah, and ancient Roman history and also the poetry of Paul Célan and Ingeborg Bachmann. Kiefer materializes the fragility, power and beauty of life and death in these works. He gives human memory a form and urges the viewer against forgetting the past revealing how the present is so intimately linked with what came before. 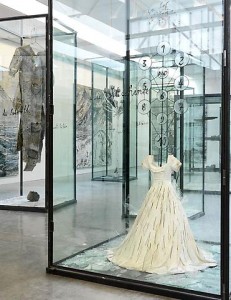 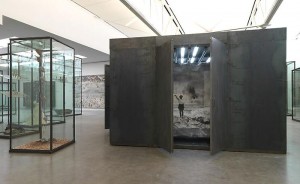 CALORIFIC CR UISING! Chocolate, ice cream and wine… This is not a typical ‘get fit’ trip.(Features)

Daily Mail (London) July 9, 2011 Byline: by Jaci Stephen MIND? Over-active. Body?Overweight. Spirit? Evaporated. Safe to say I was at a low ebb when I chose the Crystal Symphony cruise that seemed to promise rejuvenation in the key areas.

Yoga, Pilates, paddle tennis, beauty therapy, health lectures, dancing — the programme was a full one and, stopping off at three points on what was billed as the Mexican Riviera, I could already picture myself a week on: thin, creative, calm. web site chocolate ice cream recipe

Setting sail from Los Angeles with more than 900 others, and installed in my penthouse suite with a welcome bowl of fruit and bottle of champagne, I’d already embarked on my new life. Well, apart from the champagne. And the free wine. Oh, yes, and the chocolates.

There was a burger and chips too, on the lido open deck, because my luggage was still on its way to my suite. I reckoned my mind, body and soul (MBS) experience had not officially begun, so I was simply enjoying my last meal before Health Row.

Back at the suite, unpacking my healthy clothes (tracksuit, two sets of trainers, seven pairs of Lycra leggings, matching tops and a Himalayan range of sports bras, I felt excited. Then there was a knock at the door.

‘Hello, my name is Igor. I am your butler.’ I could not think of any instances where I would hear the words ‘Igor’ and ‘butler’ in the same sentence, yet here they were, like the missing lyrics from Monster Mash.

Igor, from Croatia, instantly dispelled any fears that I’d be torn from my bed at 6am to jog 20 laps around the deck. He was utterly charming and assured me of his service throughout the voyage. I felt so instantly relaxed, I returned to the lido and had a triple-scoop ice cream. With chocolate bits.

It was a good time to contemplate the land tours that were going to enhance my MBS experience. Did I want to swim with a dolphin? Doubtful. The Mexican Outback Adventure sounded promising. But the leaflet featured a yellow truck seemingly stuck in the middle of a pile of rocks.

The joys of this trip included a visit to a farm. I watch Emmerdale; what more did I need?

But I was willing to throw myself into the onboard activities and keen to hear someone billed as the Skin Doctor.

I was late for the lecture, but arrived in time to discover the methods used by male butterflies to discover if female butterflies are virgins. When they alight (literally and metaphorically) upon said female, they ‘plug’ her with their sperm so she cannot be inseminated by any other bloke fluttering his winglashes at her.

Goodness knows what the ingredients of the beauty products might contain.

After 20 minutes, and some enquiries, I discovered the Skin Doctor had cancelled and the butterfly expert had taken his place.

Robert was one of the main fitness experts, and I joined a huge section of what appeared to be wisdom the Cabo Encounter. Mexican gives chance to Pacific dolphins the entire Japanese population onboard at his detox lecture. Actually, I use the word lecture loosely; the Gettysburg Address wasn’t delivered with as much verve as Robert on the subject of toxins. I could feel my fat molecules running for cover as his felt pen swept across his flip chart with triangles, squares and circles shouting the horrors of over-indulgence.

I was so worried by the end, I had to go and wind down with the free glass of champagne at the art exhibition.

Robert was very knowledgeable, but the problem with the lectures was the product-pushing that accompanied them. Laden with toxins? If you paid a lot of dollars, you could go and have your entire lifestyle assessed, scrutinised and criticised even more. It felt like commercial overkill. Not good for mind, spirit, nor bank balance.

On the exercise side, I was never up early enough for Pilates, but made a good friend of the teacher (whose stomach was flatter than a poppadom) — so I talked a lot about the benefits of Pilates, which may not be the same thing.

I played paddle tennis with an Armitraj – Anand, not Vijay. And my mind was more than satisfied by the workshop with the brilliant improvisation actors from Vancouver, without whose friendship I would have been a virtual recluse (note to self: cruising Europeans area lot more friendly than cruising Americans).

The nightclub and late-night bar were pretty incongruous with trying to purify my mind, body and spirit. But the dancing contributed to giving me an enjoyable MBS experience.

Ballroom early evening, then disco until the early hours, when I discovered you can burn off half a burger gyrating to the Black Eyed Peas. I lost weight too. see here chocolate ice cream recipe

It was easy to stick to a good diet, with the lunchtime buffet providing a vast range. The ship also had The Silk Road Sushi Bar restaurant, featuring food by Nobu, and a very good Italian.

As for the Mexican Riviera — hmmmm. ‘Riviera’, my sombrero.

Commercialised, horribly scruffy ports at Cabo San Lucas, Mazatlan and Puerto Vallarta, I wasn’t going to be drawn in by the tat being forced upon me the second my foot touched shore.

Yeah, right. One hat, two henna tattoos, an embroidered bracelet, a pair of ear-rings, two frozen margaritas, and singing the praises of worms living at the bottom of tequila bottles later, I was happy to clamber aboard the ship and queue up at the ice cream counter.

TRAVEL FACTS CRYSTAL Cruises’ seven-night Mexican Riviera voyages start at [pounds sterling]2,524 ([euro]2,838) per person (based on the November 27 sailing on Crystal Symphony), including return scheduled flights from London, overseas transfers, seven nights in a deluxe stateroom, with all meals and soft drinks, port taxes and a $500 per person onboard credit, 0044 20 7287 9040, crystalcruises.co.uk.

More than meets the eye: The Mexican Riviera

This entry was posted on Sunday, December 5th, 2010 at 8:45 am and is filed under Go See. You can follow any responses to this entry through the RSS 2.0 feed. You can leave a response, or trackback from your own site.