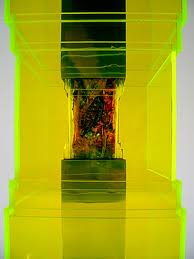 The most surprising thing about Thek perhaps, was his age. Of Andy Warhol’s generation, he is more theoretically aligned with the sincere art of David Wojnarowicz, who was twenty odd years his junior. Diver: A Retrospective manages to be a comprehensive overview of his work and his position in art history as well as a heartfelt look at his life and continuing influence, despite the absence of many seminal pieces which are no longer in existence. Thek is certainly a case of an artist before his time and perhaps is one who is altogether difficult to categorize. 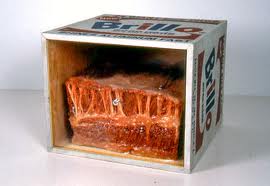 “In the early 1960s, when everyone else in New York was into hands-off fabrication and Benday dots, he was modeling hyper-realistic images of meat, raw and bleeding, from beeswax,” according to the New York Times. This series, titled Technological Reliquaries, consisting of Plexiglas containers of hyper-realist body parts (and even one in a Warhol Brillo box) consumes the viewer upon first entering the exhibition at the Whitney. Reliquaries was Thek’s entrance into the New York art world and is especially important for Diver because it introduces his origin before embarking on his later work that can be difficult for viewers to contextualize.  Reliquaries introduces Thek’s signature morbid humor, that emerges in defiance of Minimalism and Pop art.  The humor involved in filling a gallery room full of oozing, rotting limbs encased in Plexiglas (a la Minimalism) is buttressed by Thek’s clear insistence on returning to an art that dealt with life and emotion.  Reliquaries has also been read as an homage to Minimalism ignoring the Vietnam war. 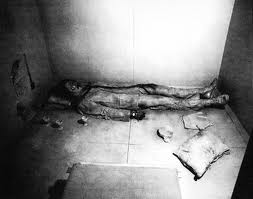 Thek’s most famous work from the “meat pieces” period, The Tomb, later renamed Death of a Hippie, was lost and is only present in the exhibition through photographs. Much of Thek’s work survives only in films or photographs, but the overall sense of him is achieved nonetheless. The ephemeral environments that Thek created all over Europe for the ten years he lived there as a nomad are not re-recreated.  Instead, remaining artifacts from the environments are dispersed singularly throughout the exhibition, many of them slightly ragged.  Fish Man, an effigy of Thek’s body covered in latex fish, is one such artifact which museum goers come upon in a corner of the exhibition. 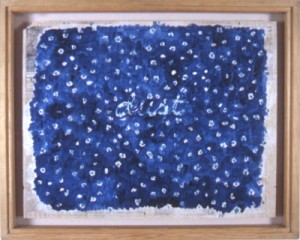 Like Wojnarowicz, Thek was interested in the messiness of feelings and life experiences.  Both ruminated extensively on religion and their queerness.  However, Thek existed just outside of any one artistic generation. His use of latex and wax and his interest in the body (or body-like shapes) can be traced to the sculptress Eva Hesse, whom he met in the 1950s. Upon viewing the exhibition, his influence on dozens of artists becomes clear, such as Marcel Broodthaers, Ed Kienholz, Paul McCarthy, Franz West, Kiki Smith, Robert Gober, Mike Kelley, Damien Hirst, Matthew Barney, and Mark Dion. It is also arguable that Thek’s influence is prevalent in artists of the current generation, such as Ryan Trecartin, whose grotesque videos have a similar humor and skewing of Pop elements to Thek’s gnome or mushroom paintings.

Believing is Seeing (Or, the Meat of the Matter) [New York Times]
Paul Thek at [Alexander and Bonin]
Paul Thek gets a major retrospective at the Whitney [Village Voice]

This entry was posted on Monday, December 27th, 2010 at 12:50 am and is filed under Go See. You can follow any responses to this entry through the RSS 2.0 feed. You can leave a response, or trackback from your own site.