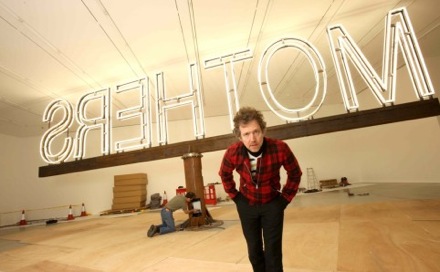 Martin Creed’s Mothers at Hauser & Wirth nearly beats viewers over the head with his exploration of relationships. The centerpiece, a huge sculpture bearing the same title as the exhibition, bears the word “MOTHERS” in neon above the heads of the audience. Creed is also releasing a new single and music video, Thinking/Not Thinking, at this show. 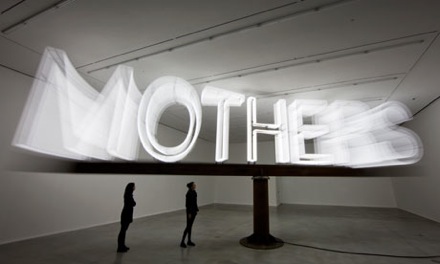 The beam holding the neon lights is twelve and a half meters long, two and a half meters high, and the whole ensemble barely fits in the exhibition room. It rotates at varying speeds, first accelerating gradually until it feels almost dangerous, then slowing back down to a near stop. It was initially proposed as a large work for decoration in a railway station in Germany, along with a similar sculpture saying “FATHERS.” As the piece evolved, Creed was forced to confront decisions on how to model the word—size, direction, motion. “I thought the word ‘Mothers’ could look good big,” Creed said in an interview with BBC News. He explained further that the size reflects the importance of mothers, as well as how they literally contain us at birth. “In general we think of something as ‘big’ if it’s bigger than us, so because as babies we are inside the mother, by definition the mother has to be big.” The spinning represents feeling a lack of control in close relationships, and the potential power play in even the most trusting bonds. Even though the spinning is prescribed and regular, the varying speeds give the illusion of danger, though Creed assures us that it’s no more dangerous than crossing a street. 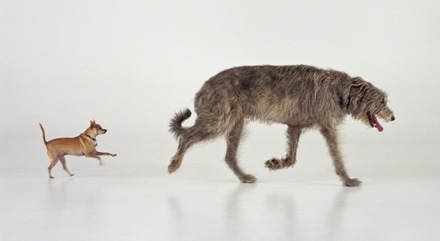 This exhibition is also acting as the release of Creed’s new single, Thinking/Not Thinking. A music video going along with the song shows two dogs walking across an empty white room: Orson and Sparky, Irish wolfhound and chihuahua. The chihuahua trots over when Creed sings “I was thinking,” and the wolfhound at “I wasn’t thinking.” The contrasting pair show up in photographs around the exhibit, “a perfect sculpture,” Creed says of his first reaction to seeing them. Some time after Creed filmed the two, the wolfhound sat on the chihuahua and broke its leg. It died from complications during surgery. Though entirely unrelated to Creed’s creating of his artwork, the death of the chihuahua highlights the relationship of size and power he explores in his Mothers sculpture. 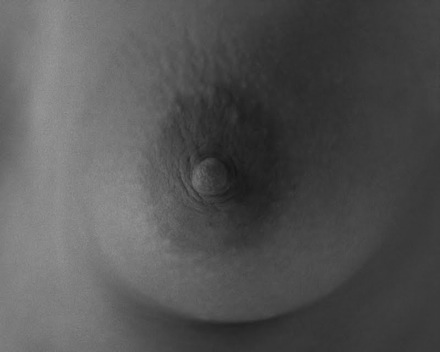 Another video on display at the exhibit is a black and white close-up of a breast with nipple becoming erect. The sequence is then reversed and the nipple goes back to its original state. Similar to past videos Creed has made of a girl compulsively vomiting and a penis going from flaccid to erect, the video forces viewers to take a close look at how our bodies function and react. Without the huge reminder of motherhood spinning in a nearby room, the image of a breast would seem almost solely sexual. But the title of the show lends the piece a feeling of childhood sustenance it would not otherwise have. 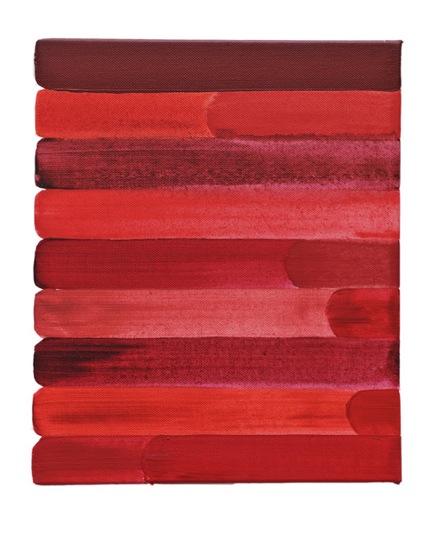 A series of mixed media paintings hang in the exhibition space alongside the two dogs. Stripes, stacked X’s in varying sizes, squares, stairs—the linear shapes come in black and white or vivid color, painted in anything from acrylic to ink to watercolor. These plain and geometric pieces feel less human than the rest of the exhibit, but show the same theme of relationships. Rather than paint on his own, Creed brought together a group of people to follow his strict instructions to make this series. His fondness of working with people created a collection of pieces tied together with one idea, but touched with the same individuality found in members of any family. 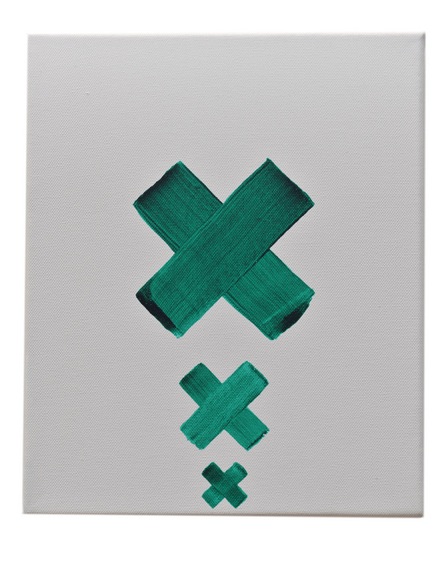 This entry was posted on Friday, January 28th, 2011 at 1:01 pm and is filed under Go See. You can follow any responses to this entry through the RSS 2.0 feed. You can leave a response, or trackback from your own site.