Francesco Vezzoli, Crying portrait of Kim Alexis as a Renaissance Madonna with Holy Child (after Giovanni Bellini) (2010). Via Gagosian Gallery 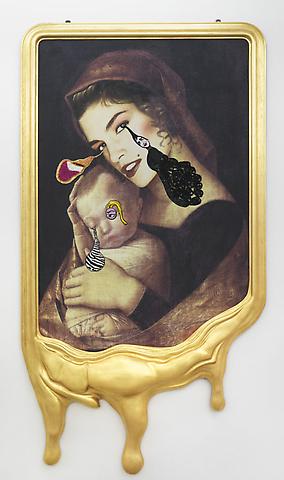 Francesco Vezzoli, Crying Portrait of Cindy Crawford as a Renaissance Madonna with Holy Child (After Andrea Mantegna), (2011). Via Gagosian Gallery 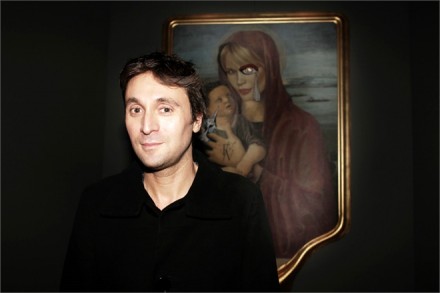 Francesco Vezzoli in front of his work at the Gagosian Gallery, 2011. Via Vogue

Vezzoli worked with architect Annabelle Selldorf to transform the gallery—often referred to as the Cathedral of Contemporary Art—into a Renaissance chapel.  They achieved the holy ambiance by dimming the lights and situating a light box depiciting Jesus Christ on the wall opposite the entrance, as a stained glass window would normally be in an actual chapel. 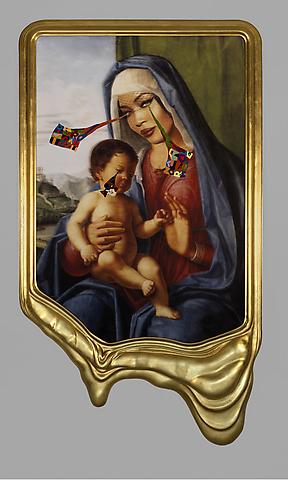 Vezzoli adorned each supermodel with makeup, tattoos, and large oblong tears in needlepoint, the artist’s signature technique.  According to the gallery’s press release, the artist chose these supermodels “to point to our society’s worship of figures from the fashion and celebrity industries.”  Vezzoli plays with how people today look up to these figures just as Catholics would revere the historical icons and portraits of the Virgin Mary.  The artist has reinterpreted the current status of female celebrities and models in today’s society through the most revered female religious icon, the Virgin Mary. 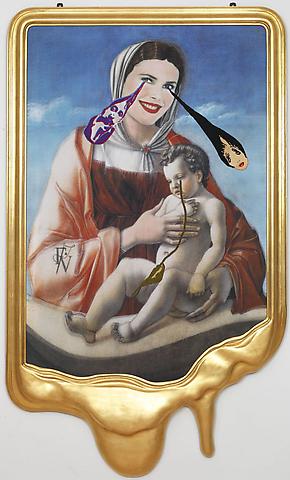 Francesco Vezzoli, Crying Portrait of Christie Brinkley as a Renaissance Madonna with Holy Child (After Giovanni Bellini) (2010). Via Gagosian Gallery

The artist also notes our society’s obsession over materialism and maternity.  In an interview with Nowness, the artist said, “Maternity and parenthood seems to be the new Fendi bag.  Everybody’s obsessed.  Once upon a time the biggest movie star, Elizabeth Taylor, had seven husbands, and now the biggest movie star, Angelina Jolie, has seven kids.”  Vezzoli plays with the concept of the maternal role in a separate architectural space, referred to as “the crypt of memory,” by presenting a black and white video “Madonna with Embroidering Child.”  Here, the artist recasts Pinturicchio’s Madonna with Writing Child image by featuring his own mother as the Virgin Mary and referencing a little boy as himself. 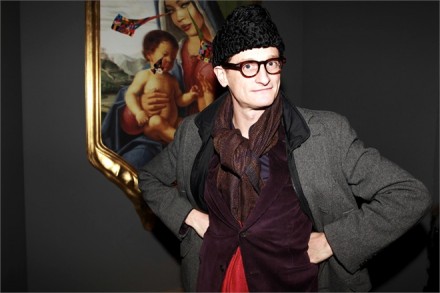 Hamish Bowles, European Editor for Vogue, at the opening of Francesco Vezzoli’s Sacrilegio at Gagosian Gallery. Via Vogue. 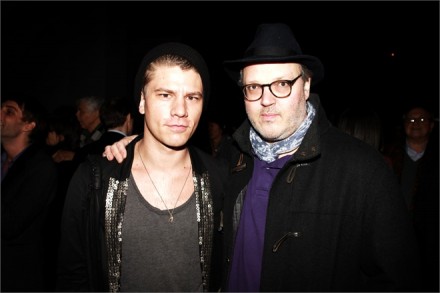 Tim Goossens, curator, and Todd Eberle, photographer, at the opening of Francesco Vezzoli’s Sacrilegio at Gagosian Gallery. Via Vogue.

This entry was posted on Tuesday, February 8th, 2011 at 6:03 pm and is filed under AO On Site, Go See. You can follow any responses to this entry through the RSS 2.0 feed. You can leave a response, or trackback from your own site.