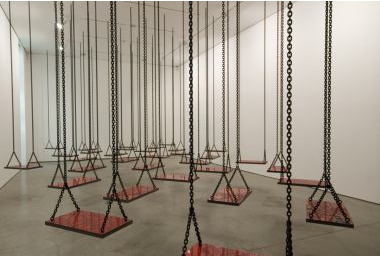 Installed on three floors of White Cube Mason’s Yard in London is an exhibition showcasing new work by Mona Hatoum titled Bunker, now on view through April 2nd. Hatoum recently made headlines by joining a group of artists in threatening to boycott the Guggenheim due to allegations that the museum is mistreating laborers constructing the Abu Dhabi branch. While Bunker does not specifically address the boycott, the themes of displacement and violence permeate this latest body of work.

The ground floor of the exhibition is occupied by Suspended, a collection of thirty-five swings that each have a street map of a capital city etched into the seat. Visitors are encouraged to walk amongst, but not sit on, the swings. Each swing is “hung at an oblique angle to its neighbour, creating a sense of geographical dislocation rather than connection, alluding perhaps to the constant flux of migrant communities across the world that shape the contemporary urban experience.” The swings rock back and forth in an eerie choreography that leaves viewers with an acute sense of malaise. 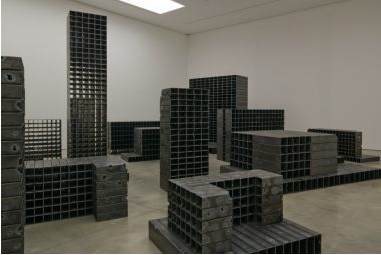 The lower level is has twenty-three architectural structures that are made of steel that has been distressed. Many of these forms refer directly to specific structures in the artist’s native Beirut and allude to the destruction left in war’s path. 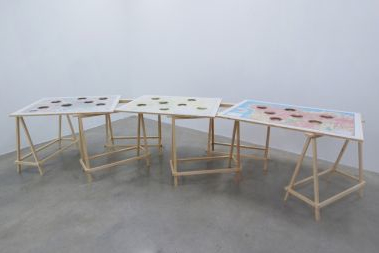 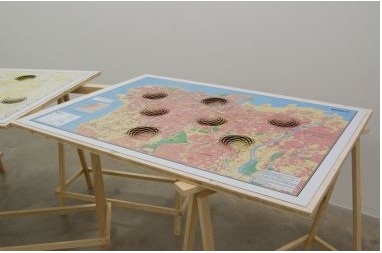 Three printed maps of Beirut rest flat on wooden supports in the basement gallery. The 3-D Cities each have circular sections cut out that appear to record seismic eruptions. The gallery notes that “Hatoum’s beautifully crafted incisions imply both the positive and negative impact of war, where the forces of destruction and reconstruction are manifest.”

This entry was posted on Thursday, March 31st, 2011 at 1:01 am and is filed under Go See. You can follow any responses to this entry through the RSS 2.0 feed. You can leave a response, or trackback from your own site.