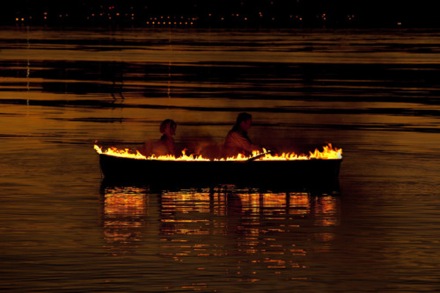 Following a canceled performance on Saturday, Dia:Beacon presented Robert Whitman‘s latest theatre performance, Passport on Sunday, April 17th despite the rain. Passport was performed simultaneously in both Beacon, NY and Montclair, NJ.  The project utilized live transmission feeds, internet broadcasting technology, and multiple video projections to give viewers a sense of displacement and the experience of being in two places at once. 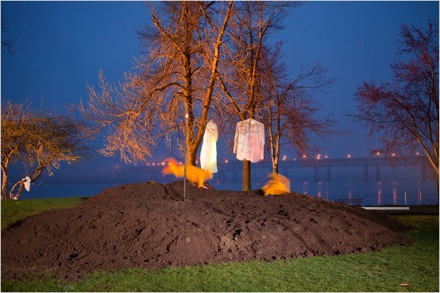 Lawn chairs and football bleachers helped to articulate something of a performance space on the grassy banks of the Hudson river. Viewers were confronted with objects that may or may not have been “props”– a bulldozer, a pile of dirt, a silver Ford truck and a horse trailer. Four giant white shirts hung from the trees on massive hangers. The shirts doubled as projection screens for a series of images: a planet, a blazing fire, the moon. Projected on a free-standing screen were the parallel events taking place at Montclair State University. 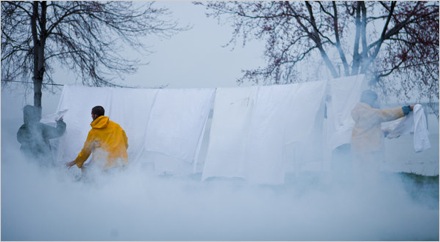 Rehearsal of Passport, via The New York Times

As the 50 minute performance unfolded, a cold rain began to fall. Behind the viewers, a man read the definition of the word “Word” from a pamphlet.

“Some Words,” he pronounced, “Do Not Mean Anything By Themselves. For Example, “So.” ” The sound of the wind as it tore through the crowd’s plastic rain ponchos drowned out the rest of the statement. It quickly became impossible for one to discern backstage and audience, and formal movements from the unplanned interruptions between them. 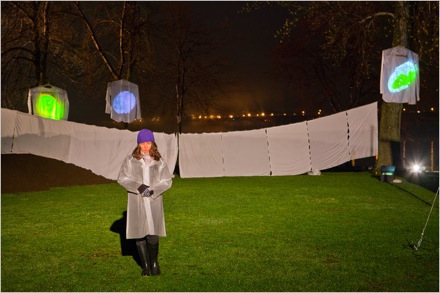 In an interview with Marisa Perel of Art:21, Whitman stated of Passport, “I wanted to create a simultaneity of experience made up of two distinct environments. What performers can do in the Kasser Theater as an indoor venue, they can’t do on the Hudson and vice versa. But all of the actions will have a vocabulary and rhythm that unifies them.”

Whitman is a pioneer of experimental theatre and performance art. In the 1960’s he sought to merge theatre, performance, film, sound, and visual imagery through his experiments with new media. Prior to Passport, Whitman’s last project was a video cell phone project. Whitman has described his work as, “nonverbal theater, using a vocabulary of space, rhythm, scale and formal plastic elements that communicate the image without words.”

Passport abandoned narrative for powerful imagery. A man dressed in blue, lying flat on a white horse. A burning canoe on the glistening Hudson. The awareness of space, of the distance between points, and how those spaces merge and split. A Metro North Train approached in the distance with a roar as an unexpected finale, leaving the viewers to question where the limits of performance lie.

This entry was posted on Thursday, April 21st, 2011 at 5:46 pm and is filed under AO On Site. You can follow any responses to this entry through the RSS 2.0 feed. You can leave a response, or trackback from your own site.