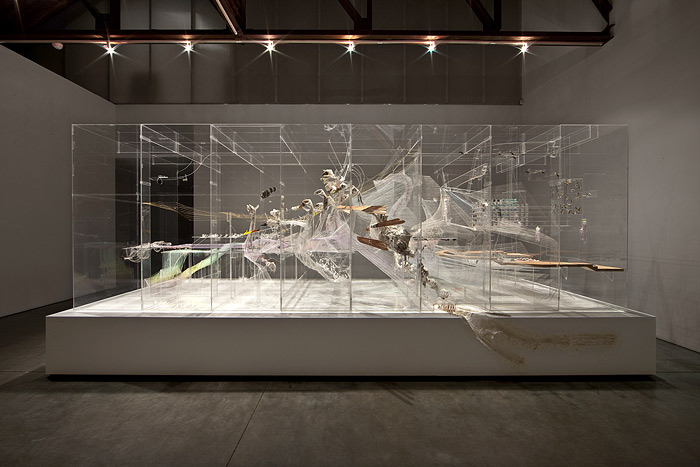 Currently on view at Andrea Rosen Gallery is an exhibition by Canadian artist David Altmejd, whose show includes sculptures that use a wide range of media and technique- terrines that house massive, undulating sculptures share the space with and site-specific pieces that draw their material from the wall of the gallery itself. Altmejd gained prominence in 2007 after his participation in the Whitney Biennial. His sculptures take many forms, but usually are centered around themes of life, death, decay and birth (not necessarily in that order.) 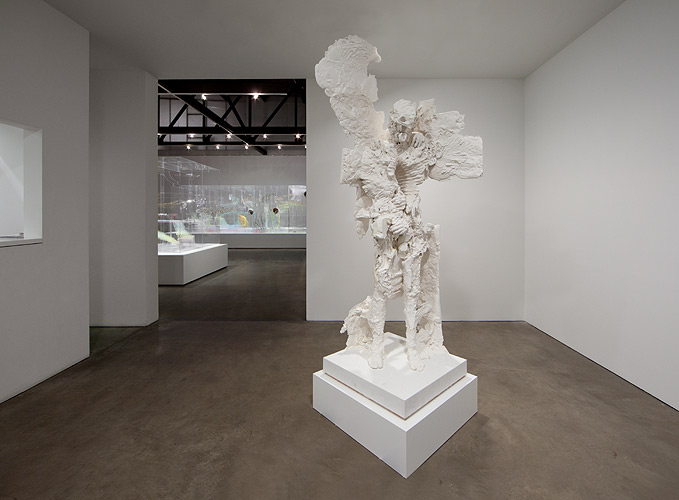 Altmejd continues his use of poetic materials as scultpural elements in the work shown here (he is often associated with his use of taxidermy and “werewolf” heads). Immense terrines house sculptures that simultaneously reference architectural models, Duchamp‘s “The Large Glass” and fantasy paperbacks.  The materials used all have symbolic potential, but in thier place as elements of combines, they build up a cacophony is allegorical, yet unreadable. It’s clear the work is talking about something, whether it be of life, death, growth, stasis, or all of those at once, but it’s not clear what story it’s telling. Perhaps this is due to the fact that Atmejd seems to use elements to service a greater goal, rather than further an argument. In fact, the work seems noticabley lacking in an argument, rather it represents itself more as a game and encourages an active state of viewing through the impossibility of taking in the whole piece at once, encouraging without directing through the sweeping landscapes. 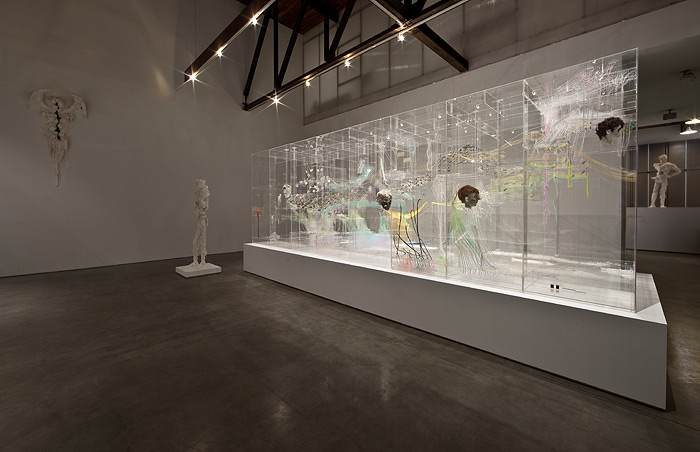 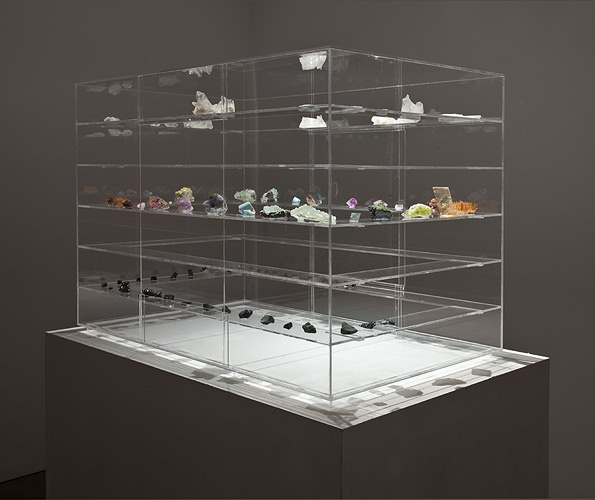 Similar in presence, but entirely different in both theme and material, the site-specific installations at the gallery are literally build into and from the wall with plaster that has been scraped out and reformed. The works utilize a traditional figurative sculptural material, plaster, to to build what are essentially icons or statues, but which, through their process-based layering and history as having once belonged to the wall of the gallery itself, ask questions about the artistic dichotomies of interior and exterior, positive and negative space, and what happens within the distance between art and architecture. 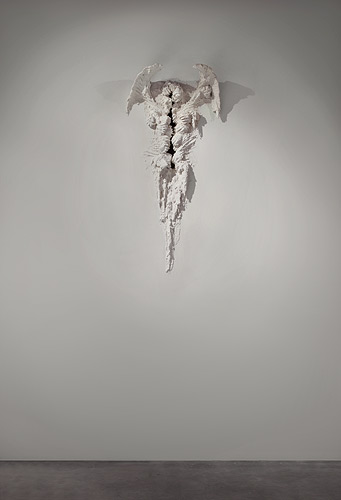 Though the artist claims that he is more interested in life than death, he is often associated with having an acute sense of morbidity. It is clear however, from this show, that there is more at work here than shock value- the show questions history, material and function. Perhaps Nancy Spector said it best in a quote from W Magazine: “David has a really unique aesthetic vocabulary, combining the horrific with the sublime… Though his work is quite different from Matthew Barney’s, both artists share a regenerative vision, one that finds expression in grotesque beauty.”

The show will be on view until April 23rd.

This entry was posted on Thursday, April 21st, 2011 at 12:13 am and is filed under Go See. You can follow any responses to this entry through the RSS 2.0 feed. You can leave a response, or trackback from your own site.