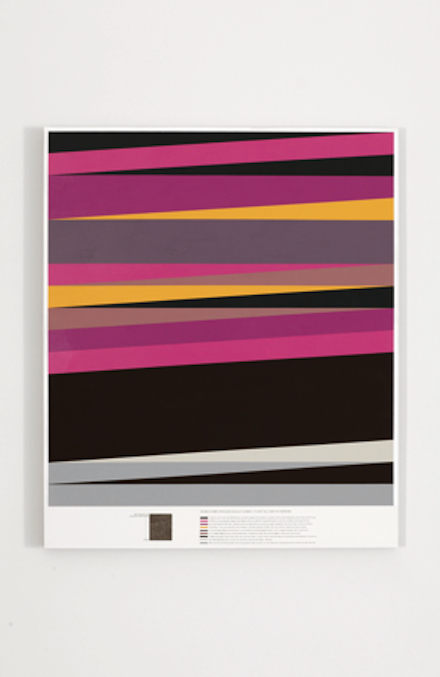 Andrew Kuo, The Walk Home After Being Racially Slurred/I’m Not Tall, Dark or Handsome, 2011. Via Taxter & Spengemann.

New York City-based artist Andrew Kuo is presenting his second solo show, My List of Demands, at Taxter & Spengemann through April 30th. Kuo meticulously tracks events in his life on digitally-produced charts, including rational and emotional insights on his milieu or on the music he listens to. The richness of the color palette on these charts, as well as the highly stylized use of lines and shapes, and the ludic quality of the variables reflect the artist’s concern on creating beautiful and empathetic representations of messy and conflicted life experiences; enclosing either a gesture, an incident, or a temporal subject (e.g. a musical piece) in a tight, quantifiable, bi-dimensional object.

more images and story after the jump…. 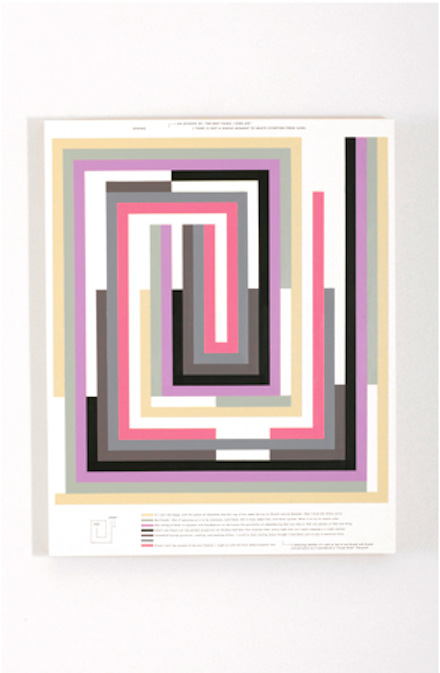 Andrew Kuo, During an Episode of  “The Best Thing I Ever Ate”/There is Not a Single Moment to Waste (Starting From Now), 2011. Via Taxter & Spengemann.

Widely known as a music blogger for The New York Times’ ArtsBeat, Kuo started his charting of musical events as a humorous post-show note for his friends. Eventually, as he kept producing them, one caught the eye of a music critic for the The New York Times, who asked Kuo to collaborate with the newspaper’s cultural blog, ArtsBeat, by creating more charts that synthesized his perceptions on the musical scene, instead of writing conventional reviews. The meshing of the functionality element and Kuo’s idiosyncratic tone on his contribution with ArtsBeat, renders an illustrative and entertaining mapping of popular music by a self-described “music nerd.” Kuo’s reliance on the casual use of–assumed as assimilated–music references and genre neologisms, make the charts even more appealing for the youth culture, as the readers who catch the “wink” can also consider themselves insiders, music connoisseurs. 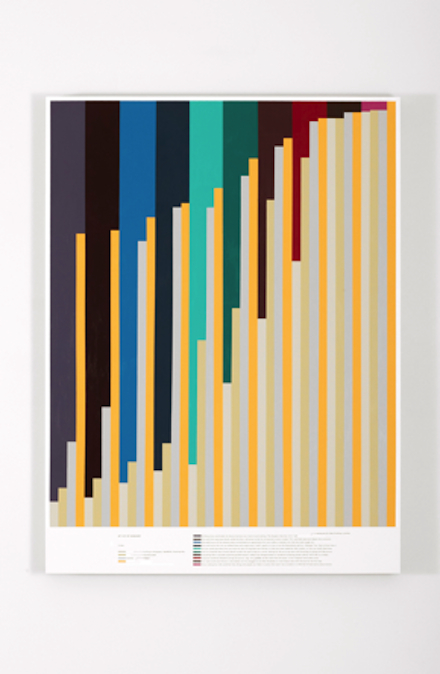 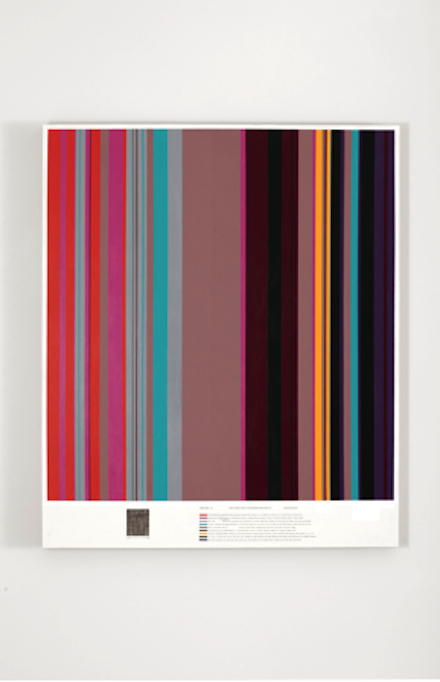 On My List of Demands, Kuo’s charts are beyond self-explanatory, with titles such as The Walk Home After Being Racially Slurred/I Am Not Tall, Dark or Handsome, 2011; The More You Know About Me, The More You’ll Think Twice Before Calling/I’d Be More Tolerable If I Smoked Weed Because…, 2011; or New Me/One Hour Paid Conversation With a Psychiatrist, 2011. There’s little room for misinterpretation of the charts’ genesis, or a tangential approach to the formal possibilities of the composition. As he creates variables that englobe his perplexity on the intricate–perhaps irrational–behavior of the other, Kuo quantifies an unilateral reflection on personal emotions and perceptions he indirectly attributes to a ghostly interlocutor, and to which he seems to be responding by means of his variables. There is also a certain aspect of loneliness in the works, as their small sized type makes them claim the viewer’s physical proximity, as if that proximity would contribute to further sympathy of the audience for the artist’s dissected emotions they are having access to. 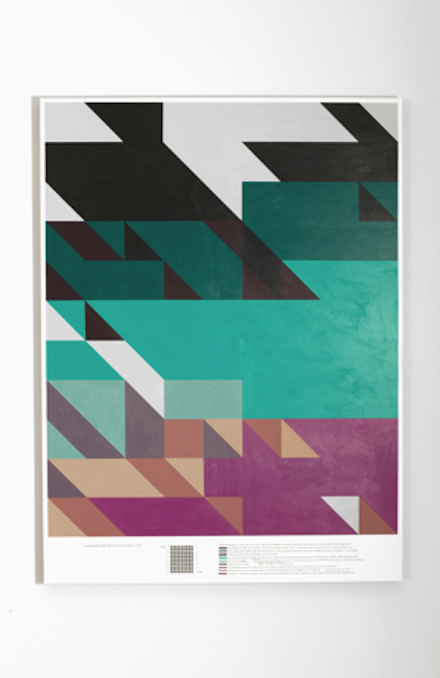 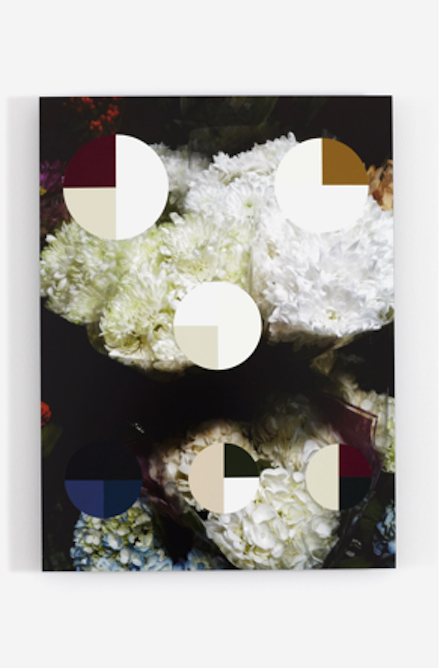 Besides the charts, Kuo is also exhibiting prints and paintings of flowers and self-portraits. The intended effect of “zooming-in,” by means of juxtaposing amplified versions of units of color which compose the image, resembles Mexican artist Gabriel Orozco‘s “Atomists” series, where sport pictures from newspapers are overlaid with painted geometrical figures, such as circles and ellipses, using–as well–colors that are taken from the picture’s palette. On Kuo’s prints, these modifications may also be appreciated as a continuation of the artist’s charts, but with contextualizing images instead of words, giving the work a more evocative, mute quality.

Frequent-flyer certificate-holders who procrastinated may be sorry.(Originated from Knight-Ridder Newspapers)

A rude awakening could be in store for thousands of frequent-flier club members nationwide who got certificates a year or so ago entitling them to a free domestic round-trip ticket in exchange for 20,000 miles. website delta frequent flyer

Many traded in mileage for certificates because the airlines were about to raise the threshold for a free trip to 25,000 miles. Most big U.S. airlines adopted the new award level early this year.

But for fliers who haven’t taken their free flights yet, many of those one-year certificates will expire between now and February, and club members who try to book a quick trip with them may well find that there’s a “sorry, full” sign on flights on the busiest routes. Each flight has only a limited number of seats allotted for award travel.

“For anybody who has procrastinated and wants to go to a popular destination on a popular day, it’s going to be very tough,” said Dan Brock, USAir’s vice president in charge of the airline’s Frequent Traveler program.

Brock said passengers should be flexible in trying to use their certificates _ fly midweek and consider cities other than the hottest travel destinations.

Certificate-holders who can’t get a flight that suits them have some options, but they must act before the certificate expiration date _ or see their 20,000 miles vanish.

Some airlines will let you book a ticket good up to a year in advance with the certificate, effectively extending the certificate’s value and also increasing the chance that you can book your preferred time and destination. here delta frequent flyer

Another option with some airlines is to reinstate, for a fee _ $40 in the case of USAir and American Airlines _ the certificate mileage back into your program account, though there may be restrictions.

The U.S. State Department has revised its consular information sheet on Ireland, noting that terrorist incidents in Northern Ireland have all but ceased since the cease-fire of August 1994 and that the danger of violence spilling over into the Republic of Ireland has decreased accordingly. It warns, though, that the incidence of petty crime is high, and that thieves target rental cars and tourists, especially around tourist attractions.

Discounted car rentals, beginning at $99 for seven days, are being offered in England, Scotland and Wales by the Kemwel Group. The rate remains in effect until March 31, but excludes the Christmas season. Information: 800-678-0678.

With the trend toward banning smoking on flights, you might think there are few options available to smokers. Not so. The trade publication Travel Weekly contacted all the major airlines and found these have smoking sections on all international flights: Aeroflot, Aerolineas Argentinas, Aeromexico, Air India, Alitalia, All Nippon Airways, El Al, Finnair, Iberia, Japan Airlines, SAS, South African Airways, Swissair, Tower Air and TWA.

This entry was posted on Monday, April 25th, 2011 at 12:29 pm and is filed under Go See. You can follow any responses to this entry through the RSS 2.0 feed. You can leave a response, or trackback from your own site.