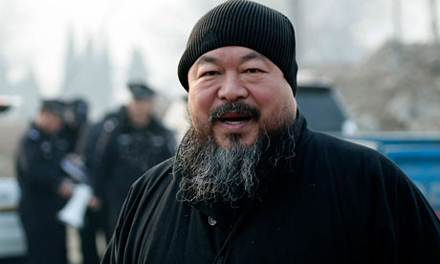 After 43 days of detention, reports broke earlier today that Chinese artist Ai Weiwei was allowed a visit from his wife Lu Qing on Sunday. A friend of Weiwei’s, rights lawyer Liu Xiaoyuan, confirmed that the artist had not been tortured or ill-handled, and that he was receiving medication for his diabetes and high blood pressure. 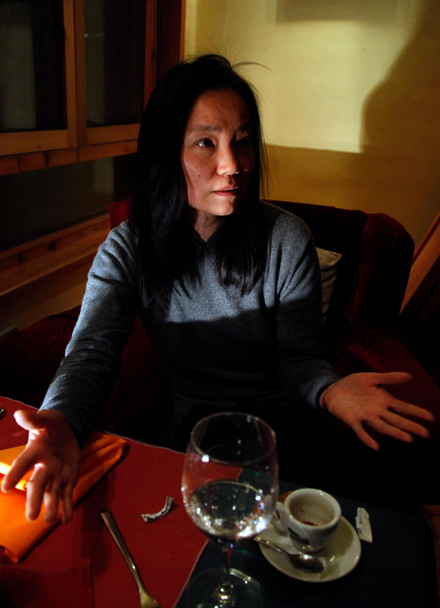 According to the Washington Post, the meeting occurred on Sunday. “Ai’s wife Lu Qing received a call from her local police station in Beijing […] Ai’s wife was then taken by authorities to an unfamiliar place in Beijing where she was able to sit across a table from her husband and talk to him” for less than half an hour.

Weiwei’s whereabouts remain undisclosed, and due to the short nature of the heavily supervised visit, more details on his condition were not able to be divulged. Mr. Ai is not being detained in a jail or hospital; his wife told the New York Times, “It appears he’s not in handcuffs, he was not wearing prison clothes and he was allowed to move freely within where he is living now. So I guess it’s a form of house arrest, under supervision.” During the visit, Weiwei, 53, was mainly concerned about the health of his 80-year old mother.

Qing told the AP, “He has changed. His mood and demeanor are so different from the simple and spontaneous Ai Weiwei I know. It was obvious that without freedom to express himself he was not behaving naturally even with me.”

The art world has shown an immense amount of solidarity for Weiwei’s release, and his works have continued to be shown in his absence. The most recent of his exhibitions, a survey at Lisson Gallery, opened last week.

The visit marks the first time anyone has heard from Ai Weiwei since his arrest at the Beijing airport on April 3, 2011. The artist is said to be under investigation for economic crimes toward the Chinese government, but has yet to be charged.

When Profits Drop at Ford Motor Co., So Do Executives’ Rewards.(Originated from Detroit Free Press)

Trotman wasn’t the only top Ford executive to take a financial hit because of lower corporate earnings, according to the automaker’s 1995 proxy statement to shareholders, released Tuesday.

“We pay for performance,” said Ford spokesman Chris Vinyard. “And 1994 was a record year for Ford. While 1995 was the fourth-best year ever, compensation is tied to performance both long-term and annually.” In 1995, Ford earned $4.1 billion, down 23 percent from the record $5.3 billion in 1994.

Trotman also was awarded 350,000 stock options worth about $1.1 million as of Tuesday’s closing stock price.

Stock options are a form of executive compensation tied to stock prices. Executives can buy stock at prices typically below prevailing market values and pocket the difference.

In the United States, Ford’s automotive operations earned $1.8 billion, declining $1.2 billion compared with 1994. A solid first half of 1995 was followed by a disappointing second half, due in large part to the cost of retooling more factories than usual to build redesigned models such as the Ford Taurus midsize sedan and the F150 pickup.

The board also weighed product quality and customer satisfaction in deciding how much to pay its top executives, Vinyard said, but neither counted as much as the lower financial results.

Ford’s chairman actually pocketed about $3.1 million last year, and had the remaining $2.3 million deferred to future years. How much he earns in deferred income is tied to the long-term performance of Ford and the future of Ford’s stock price.

It’s another incentive for Trotman to pull the right strings so that Ford stock price and profit levels increase.

It’s also the same carrot Ford’s board gave to the other top executives and to the board itself. Each director has agreed to maintain ownership in stock equal to five times the sum of the outside director’s annual board and committee fees, roughly $60,000 a year.

Ford last year adopted guidelines for people at the vice-presidential level and above that establish target ranges from one times salary to five times for Trotman.

Trotman has extended the one-time earnings target to 30 other key executives below the vice-presidential level, tying the bulk of Ford’s senior executives compensation to company performance.

The board also decided that as of last January, $10,000 of each director’s annual fee will be paid in stock, not cash.

Both Chrysler Corp. and General Motors Corp. have made similar moves to either fully or partially compensate board members with stock instead of cash.

This entry was posted on Monday, May 16th, 2011 at 11:35 am and is filed under Art News. You can follow any responses to this entry through the RSS 2.0 feed. You can leave a response, or trackback from your own site.