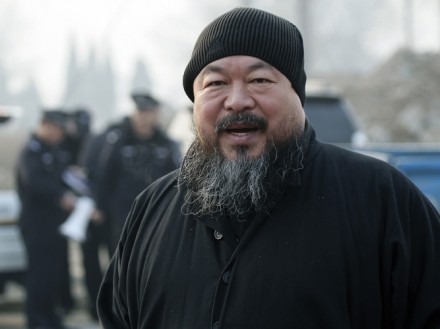 Yesterday, Chinese artist and political dissident, Ai Weiwei, was prevented from catching a flight from Beijing to Hong Kong. The assistant who was with Ai at the time, Jennifer Ng, was told by officials that “he had other business” to attend to as the artist was taken into custody. The location and condition of the artist are to date unknown. The detention of the prominent artist, well-known for his open criticism of the Chinese government, may relate to an accelerated suppression of Chinese intellectuals, possibly related to fear on part of the incumbent authorities of a Chinese version of the so-called “jasmine movement” that has been shaking, and in some cases dismantling, some of the Middle East’s dictatorship regimes. Under these still-unclear premises, at least twenty-three Chinese political dissidents have been detained, three have been formally arrested, and at least a dozen are missing. These events, embodying the most severe crackdown in China during the last decade, reflect the rigid and, considering the lack of public anti-government protests, delusive security measures of the system.

Ai Weiwei’s body of work has pointed out a finger (sometimes a middle finger, as in “Study of Perspective”, from 1995-2003) to the flaws and abuses of the Chinese authorities. His recent installations, “Sunflower Seeds,” (2010) in London at the Tate Modern’s Turbine Hall, and “Remembering,” (2009) at Munich, present a gargantuan piling of objects (in “Remembering” Ai uses 9,000 children’s backpacks) with sensible connotations on China’s history. The installation “Sunflower Seeds” makes allusions to the famines that have affected the Chinese population during the  communist years, while “Remembering” is a frail monument to the children that were victims of the Sichuan earthquake. The collapse of the public schools in the area during the earthquake killed over 4,200 children – which has been cited as an unforeseen consequence of the authorities’ use of poor quality materials during construction. 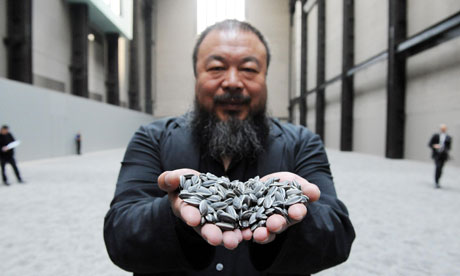 Sunflower Seeds (2010) by Ai Weiwei , via Tate Modern
Ai Weiwei’s long history of friction and discontent with the Chinese regime can be traced back to his childhood. His father, Ai Qing, was a well-renowned poet who fell from grace because of his supposed association with leftists radicals. Eventually, the State stripped his titles, and then forced him to make his living by cleaning public toilettes. Ai Qing and his family lived in inhuman conditions, and he attempted suicide on several occasions. 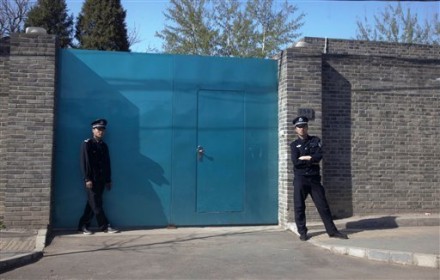 Guards outside Mr. Ai’s studio via New York Times
From its origins through contemporary times, the methods of the communist Chinese government for appeasing dissident voices has evolved to encompass the complete spectrum of opposition in order to crush it. Since Ai Weiwei started reacting and questioning the system, he has been physically attacked by Chinese policemen (in 2009 he underwent an emergency surgery related to internal bleeding, weeks after receiving blows to the head). His Shanghai studio was demolished under government orders as he was placed under house arrest. Ai Weiwei has been prevented from leaving the country (most recently in 2010, when the authorities suspected that he was planning on attending the Nobel Peace Prize ceremony in honor of  the imprisoned Chinese activist Liu Xiaobo), and has been closely followed by plainclothes policemen. Additionally, two of his email accounts have been hacked and deleted. His patience, resilience, and in some cases stubbornness have been among the foundations of Ai’s politics of resistance. He has steadily denounced the Kafkaesque bureaucratic apparatus, seemingly designed for the repression of demands by the common citizen,who is, at the end, overwhelmed by the impermeability and impassibility of the Chinese civil-servants’ procedures. Also, Ai has been using Twitter to keep a tally of the detentions and disappearances occurring in China; his account has cultivated over 70,000 followers. 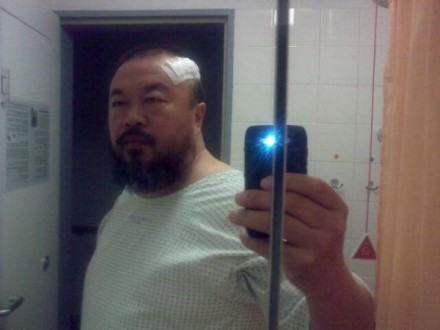 Ai Weiwei at a hospital in September, 2009. via Twitter
The issue of whether Ai Weiwei will be released anytime soon, or formally arrested, becomes more and more turbid. Since the whereabouts of the artist are not yet known, there has been extensive international media coverage exposing the concerns and speculations of his family and friends, as well as human rights activists, lawyers, politicians (Germany minister Wester Weyler has requested China his release), and the international art scene, all of whom have expressed their worries about Ai’s present situation without receiving any confirmation from the authorities. Additionally, a petition on Twitter (A “Twitition“) has materialized, garnering support for freedom of the well-known artist. The Chinese police’s scarce comments on the detention have varied, ranging from ambiguous to plainly blunt. After the detention, policemen in both plainclothes and uniform searched the artist’s studio in Caochangdi and other properties, extracting a number of items including thirty computers and hard drives, and also shutting down the electricity in the neighborhood. Furthermore, eight of his assistance were also hauled out of the studio, detained and later released. His wife, originally kept in house arrest  during these events, has been released, but hasn’t been able to communicate with Ai. The artist had recently announced his plans on moving his studio to Berlin, following the destruction of his brand-new studio in outer Shanghai, but according to acquaintances, Ai didn’t give hints of anticipating his detention.
- M. Silva 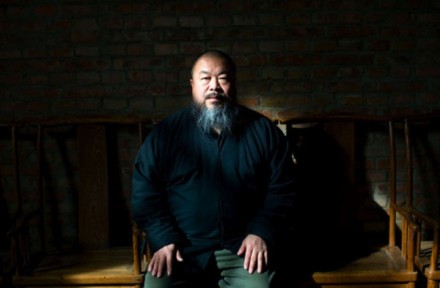 This entry was posted on Monday, April 4th, 2011 at 7:21 pm and is filed under Art News. You can follow any responses to this entry through the RSS 2.0 feed. You can leave a response, or trackback from your own site.