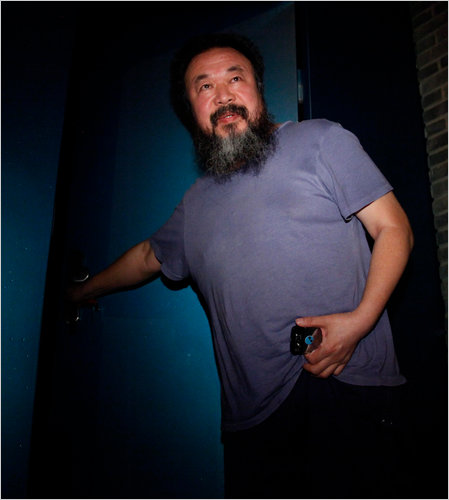 Ai Weiwei after being released from detention on Wednesday, via New York Times

Ai Weiwei, who has been detained by the Chinese authorities since April on charges of tax evasion declared in May, was released today. “I’m released, I’m home, I’m fine,” he told the media in English. “In legal terms, I’m — how do you say — on bail. So I cannot give any interviews. But I’m fine.” According to a report by Xinhua, the Chinese state news agency, the artist was released on bail because of his “good attitude in confessing his crimes,” and because he was willing to pay the taxes he allegedly evaded. The same report claimed that Ai Weiwei’s company, the Beijing Fake Cultural Development Ltd., destroyed accounting records which showed the evasion of “a huge amount of taxes.”

more story after the jump…

While the word “bail” has been used, the Chinese term “qubao houshen” means obtaining a guarantee pending trial, according to the New York Times. In essence, charges are dropped based on certain conditions, which may include monitoring. The Chinese government has been widely criticized for the detention of the artist as well as a number of other prominent dissident intellectuals and artists, and especially as Ai Weiwei suffers from a chronic condition and needs medication. However, the artist appeared healthy as he spoke to the press.

Ai Weiwei is widely considered to be China’s most prominent contemporary artist, with his works exhibited around the world. He has been acerbically critical of the Chinese political system in the past.

This entry was posted on Wednesday, June 22nd, 2011 at 6:02 pm and is filed under Art News. You can follow any responses to this entry through the RSS 2.0 feed. You can leave a response, or trackback from your own site.