AO On Site for the 54th Venice Biennale 2011: Preview (with photoset) of Allora & Calzadilla’s “Gloria” at the U.S. Pavilion 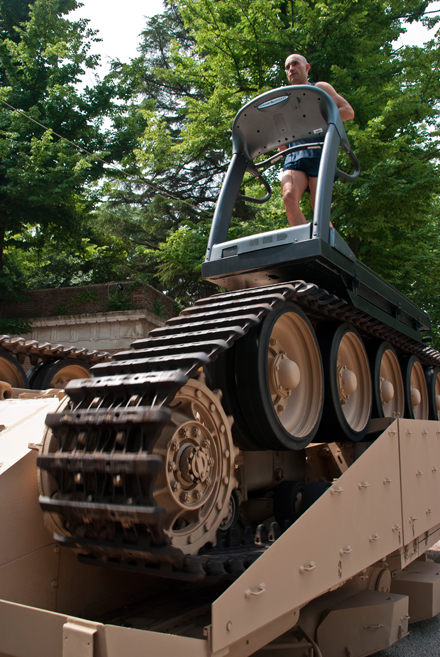 All photos by Caroline Claisse unless otherwise noted.

Representing the United States in the Venice Biennale 2011 is artist duo Allora & Calzadilla. Based in Puerto Rico, the real-life couple Jennifer Allora and Guillermo Calzadilla‘s work is deeply political, though they would have you think otherwise.

The exhibition, entitled “Gloria,” features six newly commissioned works. It is curated by Lisa Freiman, chair of the contemporary art department at the Indianapolis Museum of Art, the institution the U.S. State Department entrusted with the selection. The organizing committee is the Peggy Guggenheim Collection in Venice. Previous representatives of the U.S. are Bruce Nauman (2009) who won the Golden Lion for his country, Felix Gonzalez-Torres (2007), Ed Ruscha (2005), and Fred Wilson (2003). 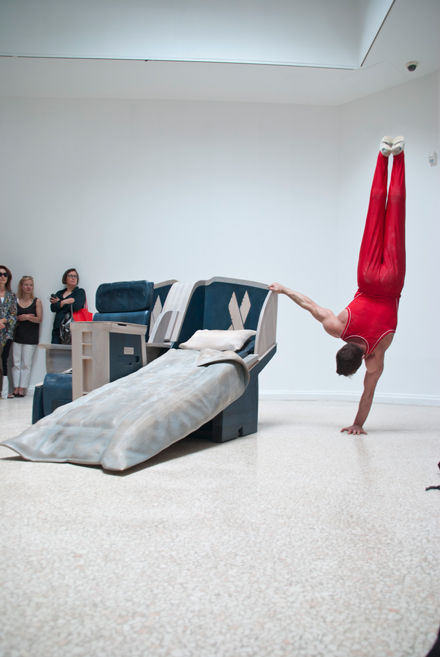 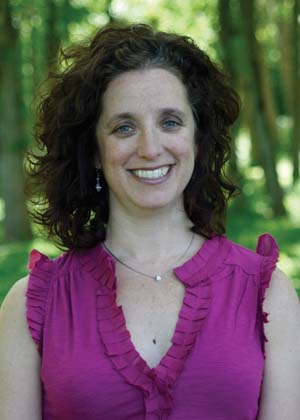 The selection came as something of a surprise, as Allora & Calzadilla have not completely been on the art world’s radar until their recent show at the Museum of Modern Art in New York, “Stop, Repair, Prepare: Variations on Ode to Joy for a Prepared Piano” (created 2008, performed in 2010).

If they weren’t before, the art world now stands firmly behind the artists: present at the opening of the Biennale exhibition were museum directors Glenn Lowry, Richard Armstrong, and Adam Weinberg (of the MoMA, Guggenheim, and the Whitney, respectively) as well as Performa director RoseLee Goldberg. 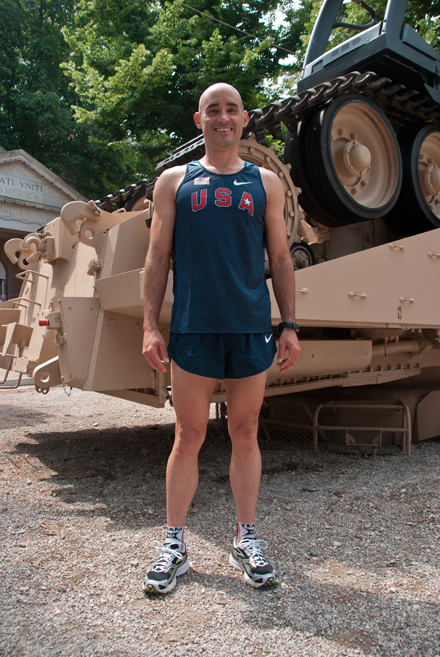 Freiman spoke to Artinfo about their very involved education program that would “reach beyond the Biennale” and “especially address under-served youth,” which she thinks added considerable value to their project application for the State Department (and it certainly doesn’t hurt to have Hilary Clinton and Barack Obama in the government). “Instead of doing something more superficial, we really wanted to focus it and give life-changing experiences to a handful of kids. So we’re initiating a dialogue between teenagers from Indianapolis, Puerto Rico, and Venice. We’re also going to be putting together a documentary about their exchanges, in relation to what they come to understand about art history and the Biennale, for the IMA’s Art Babble.” 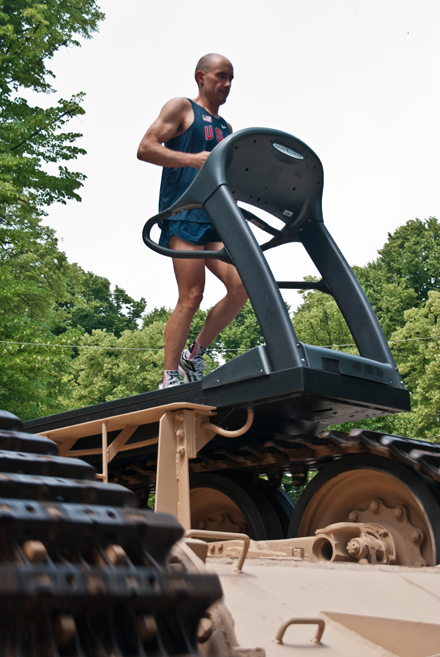 The pair see their job as artists as researchers– Allora told Art:21, “What we do often with our projects is research – it’s a chance to learn something more about something in the world and form a response.” In their Biennale exhibition, the artists are interested in the power dynamics and consumption patterns of American.

Sculptures have dual uses: an army tank doubles as a treadmill, a pair of airline seats functions as a landing pad for gymnasts. The same is true of Algorythm (2011): what appears at first sight to be a church organ is in fact an ATM. Lisa Freiman’s best categorization of the duo? Surrealists.

When Artinfo’s Ben Davis asked the duo about their politically-leaning work, Allora responded, “In all of our works, the relation to politics starts from these more essential questions about what constitutes the nature of experience, and then later, about how those types of experiences are manipulated or controlled by organizations of power. And that would be the relation to politics that we have. It’s not ever any direct, didactic political message. We’re not interested in that notion of politics. Politics to us would be essentially this idea of questioning — what is the nature of these relationships that exist today, and how do they fit together, and how can they be untied and organized in new ways? Which essentially is a formal question.”

On the unmissable metaphor of their pavilion, Calzadilla added, “the nature of the national pavilions is very similar to the Olympic Games. Each nation selects their best artist and puts them in a competitive setting. And then one gets a prize. So it is very similar. We are kind of playing with the idea of what other nation-based events there are that achieve the spectacular level of the Venice Biennale.” Allora, born in Pennsylvania, and Calzadilla, born in Cuba, have worked together since 1995. 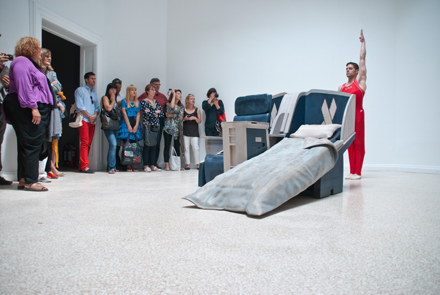 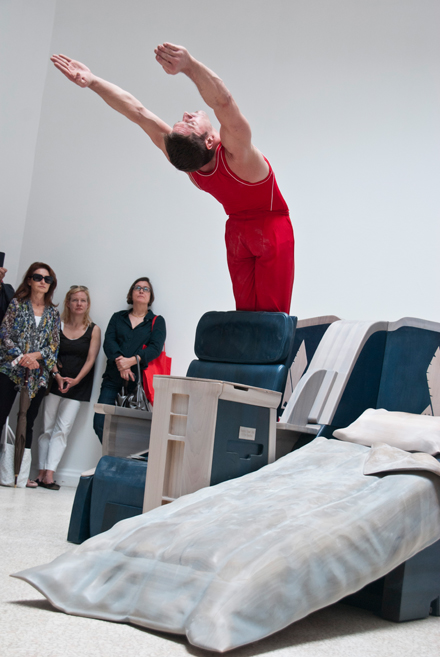 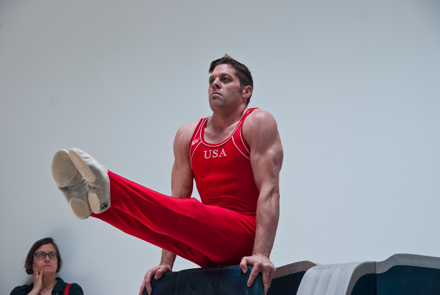 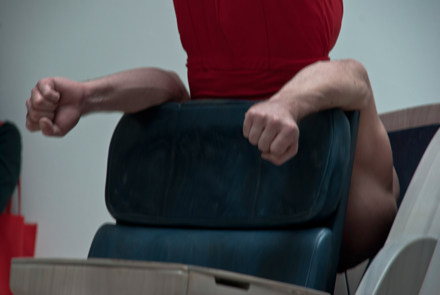 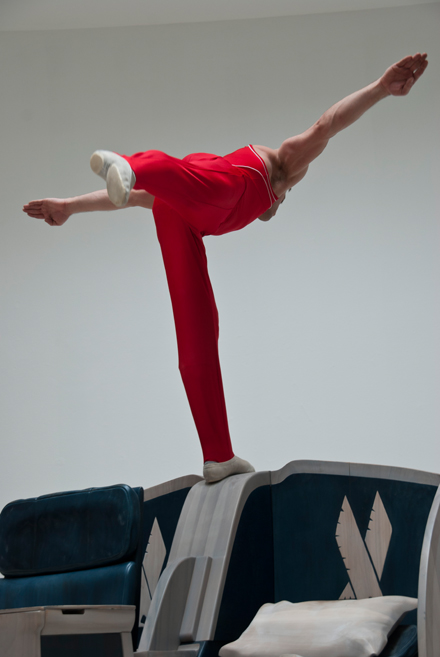 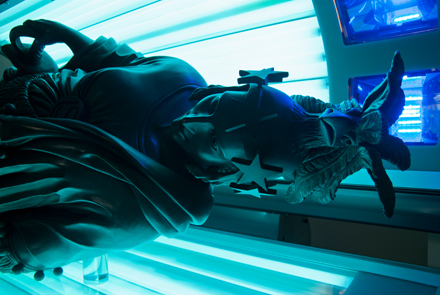 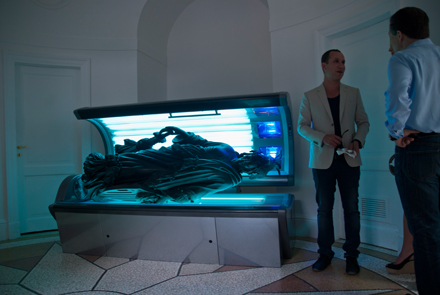 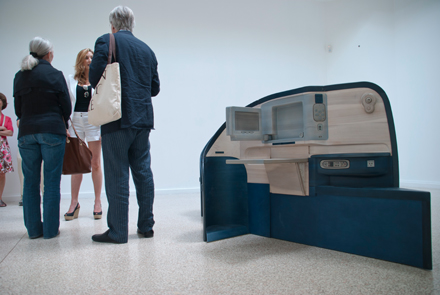 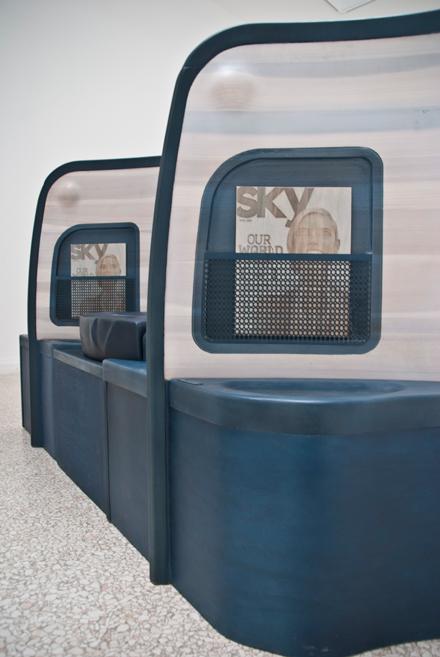 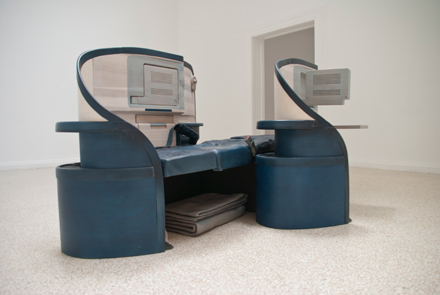 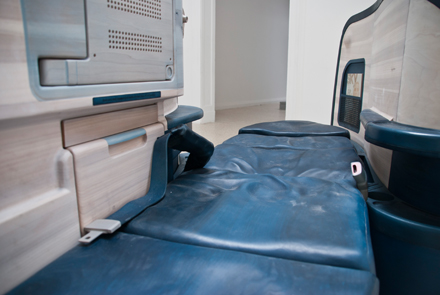 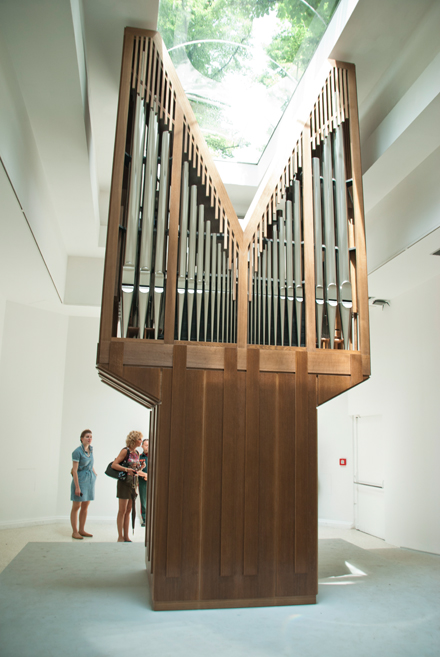 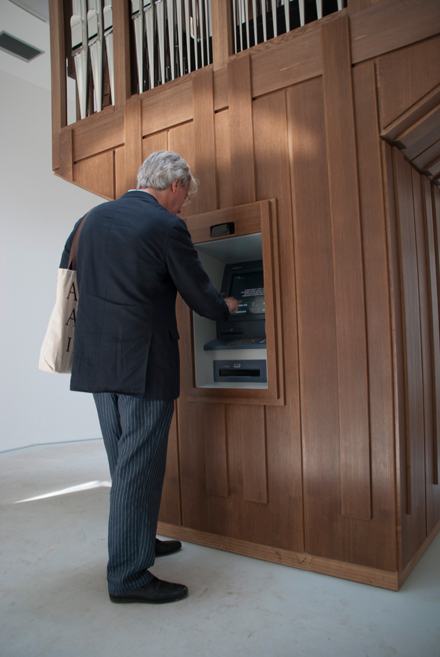 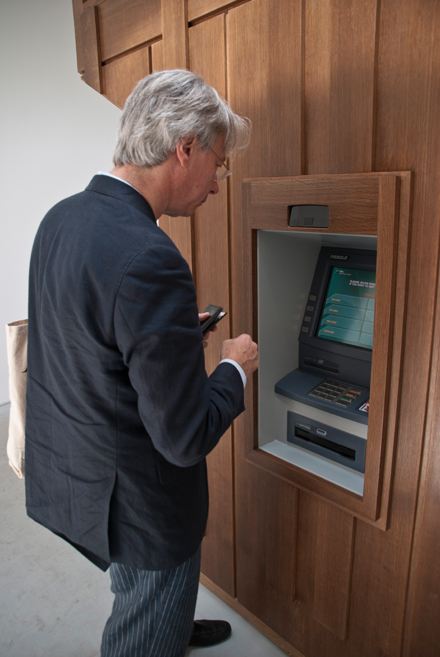 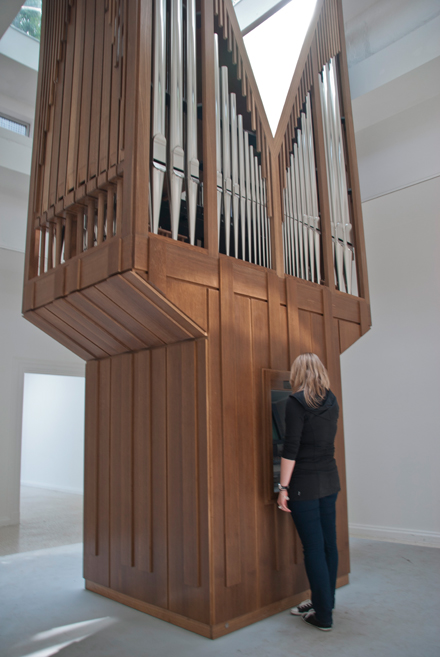 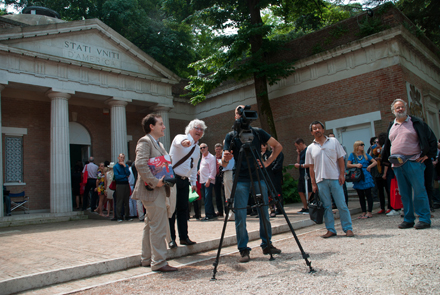 Observers and the long queue outside the U.S. Pavilion. 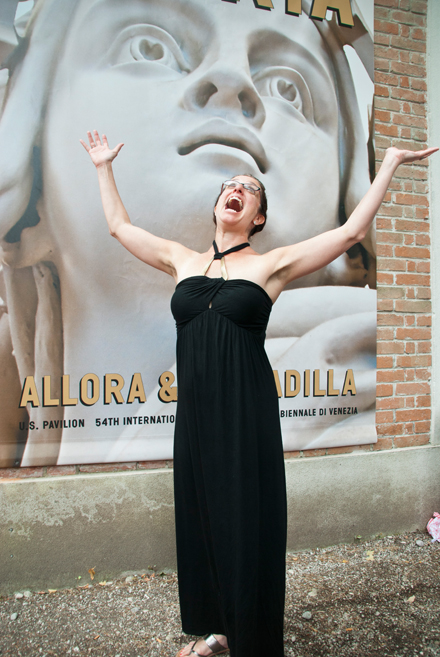 Performance at the opening of Allora & Calzadilla’s pavilion.

This entry was posted on Thursday, June 2nd, 2011 at 9:39 am and is filed under AO On Site, Go See. You can follow any responses to this entry through the RSS 2.0 feed. You can leave a response, or trackback from your own site.