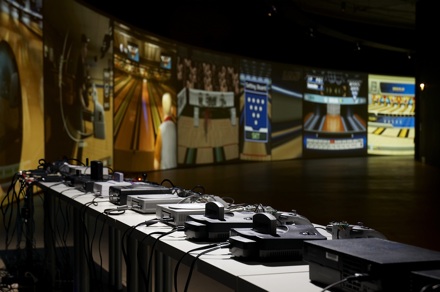 Cory Arcangel, Various Self Playing Bowling Games (aka Beat the Champ) (2011), all images via The Whitney

Currently showing at The Whitney is “Pro Tools,” the first major retrospective of Brooklyn-based Cory Arcangel. The show surveys a diverse set of works that display a focused obsession with both outdated technology and pop culture.  The exhibition’s title refers to a software that is used in sound mixing, and becomes a synecdoche for the way in which tools and trends allow culture to move forward, but in doing so render themselves obsolete. 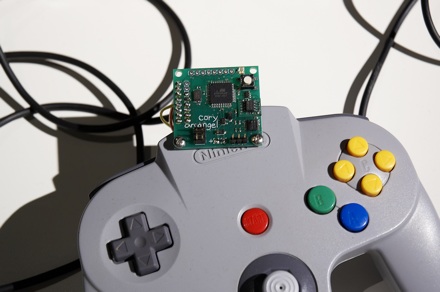 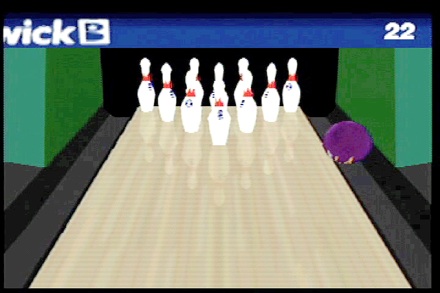 Exiting the elevator on the Whitney’s fourth floor, the viewer is immediately engulfed by an installation in a massive dark room in which  “Various Self Playing Bowling Games (aka Beat the Champ)” is projected onto the entire wall of the first gallery. The piece projects from various game consoles from the 1970s-2000s, all auto-playing bowling games that have been hacked to allow the player to throw only gutter balls. The installation, which was co-commissioned with the Barbican in London, initially seems to have a wry irony to it, but soon moves past humor to the anxious tragic limbo of the continually distraught avatars; similarly, in another room, viewers are invited to participate in a Wii golf game in which the putt will always just miss the hole. According to the show’s press release, “Arcangel sees golf games as a simulation of a simulation, ‘a virtual re-enactment of a fake hunt played out in a carbon copy of nature.”” 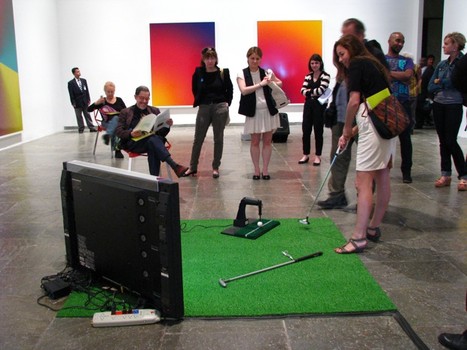 Cory Arcangel’s work relies on his use of programming as a new vocabulary for minimalism, hacking amateur technologies for use as a sculptural medium. The Whitney’s show takes up the entire 4th floor of the museum and moves through diverse and sorted facets of technological, pop, and art history. Arcangel traces the influences of Kelly Clarkson’s “Since U Been Gone” in a series of prints, creates an ultra-meta “supercut” of every episode of Seinfeld that mentions Kramer’s “Coffee Table Book About Coffee Tables,” and nods to Christian Marclay’s “The Clock” in a  recreation of Paganini’s ‘Violin Caprice no. 5’ via a video mashup of clips of Youtube guitarists, made with a program Arcangel wrote called Gould Pro as an homage to Glenn Gould. In every piece, however, the medium is used to the end of exploring the element of technology in relation to its human users, becoming much more strongly evocative than functional. 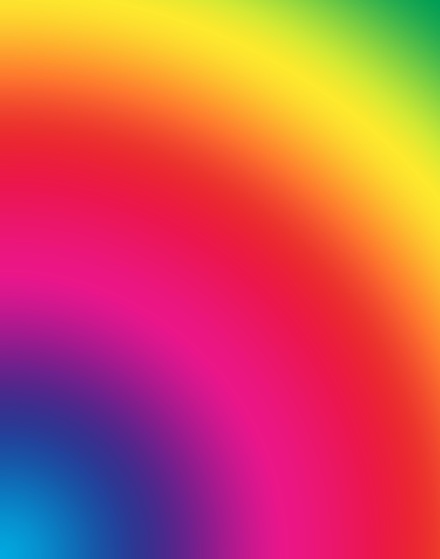 Also included in the show are large C-Prints based on an algorithm used to create gradients in Adobe Photoshop, which result in graded rainbows that are an updated, instantaneous versions of color field paintings and are, like much of Arcangel’s work, conceptually dependent on the fact that they are open sourced. Like many hackers, Arcangel has said that he believes programming code should be in the public realm- almost all of his work is easily recreatable with the right tools. An extra wink to the visitor comes in the form of a cell phone tower and Wi-Fi access station, two resources normally forbidden in the museum. Arcangel asks the question of how, in the internet age, we can qualify the privatization of art, and thereby further emphasizes what seems to be his main theme: the humanism inherent in technology. 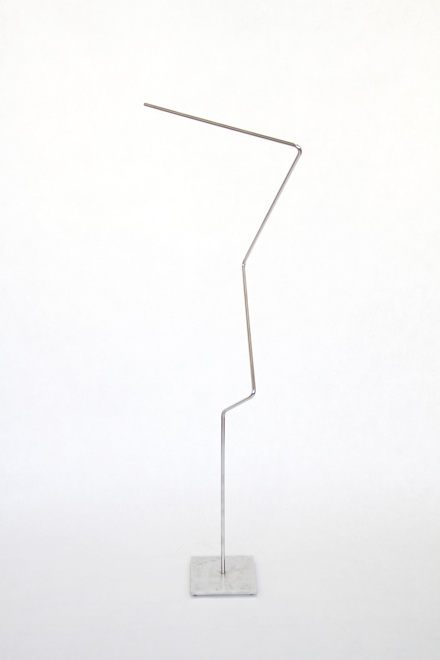 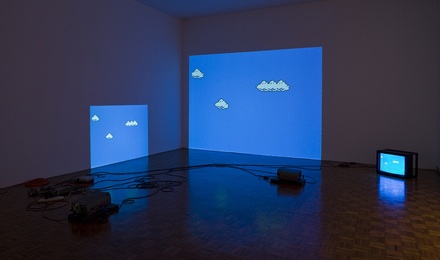 Cory Arcangel’s major art world debut came in 2004 with the exhibition of his “Super Mario Clouds v2k3” at the Whitney Biennial; the piece consisted of a version of Super Mario modified so that nothing but the clouds remained.  Since then, under representation by Team Gallery, Arcangel has shown a wider variety of works and become increasingly well known, often as the poster boy for an savvy irony he denies having any association with. He is the youngest artist to be given an entire floor at the Whitney since Bruce Nauman in 1973. “Pro Tools” will be up through September 11th, 2011.

The Virginian-Pilot (Norfolk, VA) August 5, 2005 Byline: JON W. GLASS VIRGINIA BEACH — BY jon w. Glass THE VIRGINIAN-PILOT VIRGINIA BEACH – On a calm night at high tide Monday, a green sea turtle lumbered onto the beach at southern Sandbridge, dug out a nest with its powerful flippers, laid 124 eggs and made history. in our site green sea turtle

The event, which occurred along a stretch of vacation cottages, was the first documented case of a green sea turtle laying a nest in Virginia, wildlife biologists said.

That kind of sea turtle, protected by the U.S. Endangered Species Act, commonly nests in southeastern Florida, although a few females previously have laid eggs on beaches as far north as North Carolina’s Outer Banks.

News of the Sandbridge nest spread quickly among a close-knit network of state and federal wildlife officials. Photographs snapped by an onlooker confirmed that it was a green sea turtle.

“It was just kind of a big ‘wow!’ for me,” said John Gallegos, a senior biologist at Back Bay National Wildlife Refuge.

“It is a mind blower,” added refuge director Jared Brandwein.

Gallegos headed a team of refuge staffers who transplanted the leathery eggs – the size of Ping-Pong balls – to a secluded, protected site on the refuge Tuesday morning.

They moved the eggs in coolers and re buried them with sand from the original nest, placing them inside a heavy wire mesh cage to protect the eggs from predators such as raccoons and foxes. They used umbrellas to shade the eggs from the sun while Gallegos carefully tried to replace them in the same order as the mother laid them.

“It makes sense to mimic as much as you can the natural nest,” Gallegos said.

The eggs are expected to hatch around mid-September. Because a nest this far north is so rare, biologists are debating whether to fly the hatchlings to Florida for release.

“Some think we shouldn’t be encouraging green sea turtle nesting here because it may not be well-suited for them,” Gallegos said.

Female sea turtles are thought to return to the beach of their birth as adults to lay eggs through a process known as “imprinting.” Christina Trapani, a staffer at the Virginia Aquarium Stranding Response Program, said a beachgoer dialed 911 to report the turtle coming ashore Monday at about 7:30 p.m. A police dispatcher alerted the stranding team.

For more than three hours, a group of onlookers watched as the turtle dug a nest and laid its eggs. The turtle returned to the ocean at about 11 p.m.

While green sea turtles in Virginia are rare, nesting loggerhead turtles are fairly common, with an average of three or four a year nesting on or near the refuge since the 1980s. This summer, six loggerheads have laid eggs there.

It’s possible that green sea turtles have nested in Virginia before, but there was no record of it until now, said Sandy MacPherson, national sea turtle coordinator at the U.S. Fish and Wildlife Service’s office in Jacksonville, Fla. here green sea turtle

Based on nest surveys, biologists estimate that 150 to 2,750 green sea turtles nest every year in the continental United States. Populations of the turtle off Florida and Mexico’s Pacific Coast are considered endangered; the animals are viewed as threatened elsewhere.

The turtles, named for their greenish body fat, weigh 250 to 450 pounds as adults. They are herbivores, feeding mainly on sea grass and algae, and do not begin reproducing until they are 20 to 50 years old.

But the odds of reaching that age are dismal. Only one in 1,000 to one in 10,000 of the tiny hatchlings – with shells no more than 3 inches long – are thought to reach sexual maturity.

Mature females lay eggs once every two or three years, and they are known to congregate in lush grass beds off the Florida Keys and Bermuda when they aren’t nesting. Juveniles spend time in the Pamlico Sound in North Carolina.

This entry was posted on Friday, June 10th, 2011 at 9:10 pm and is filed under Go See. You can follow any responses to this entry through the RSS 2.0 feed. You can leave a response, or trackback from your own site.