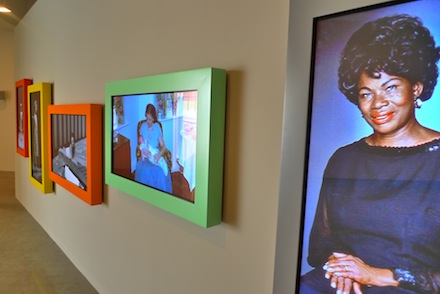 Gillian Wearing’s expansive, multi-room exhibition enters its final week at Tanya Bonakdar gallery. For People, the Turner prize-winning artist has installed works in a variety of media including video, sound, sculpture and photographic prints. Much of Wearing’s artistic practice explores notions of identity and memory, and the performativity associated with both. 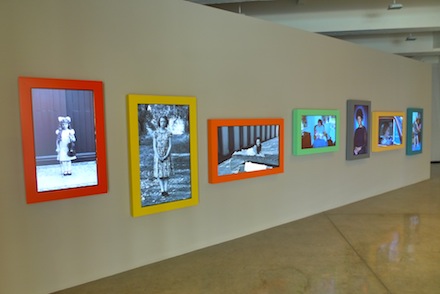 Filling the main first-floor gallery is a multi-channel video installation that takes on sculptural qualities, as each feed is colorfully framed and arranged along the wall.  Understated string instruments play on the gallery’s speakers as moving images of women at various stages of life play on loops. In a scenario reminiscent of museum audio guides, visitors are invited to wear headsets to hear the audio component consisting of an anonymous woman narrating past personal experiences. 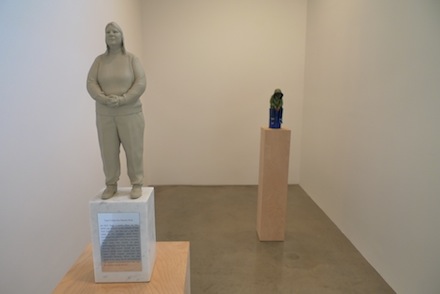 Occupying part of the upstairs gallery is a tripartite photo series showing the artist posing as Diane Arbus, Robert Mapplethorpe, and Andy Warhol. To produce the self-portraits, Wearing applied prosthetics and costume. In many ways, the artists she represents are parts of Wearing herself—the ideas of performativity, identity, reproduction and simulation with which each of the historical figures engaged are blended into Wearing’s own artistic practice. 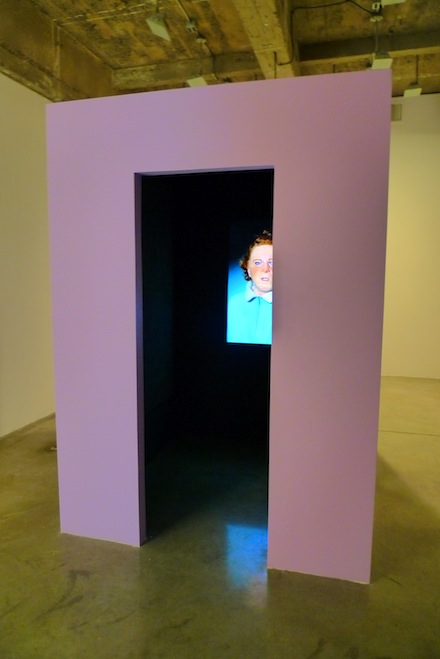 A highlight piece in the exhibition is Secrets and Lies, a video mounted within a small purple structure that is best viewed from outside the chamber. Personal secrets are told by anonymous faces wearing highly realistic masks.  What at first appears to be poor image/sound pairing eventually gives way that the delayed facial expressions are actually disgusted movements beneath the prosthetic mask each individual dons.  At the same as these revelatory stories are presented, the accompanying individual is dilapidated and artificial in its breakdown between the oral accounts told and the ambiguous lips and expressions that convey them.

This entry was posted on Monday, June 20th, 2011 at 2:37 pm and is filed under Go See. You can follow any responses to this entry through the RSS 2.0 feed. You can leave a response, or trackback from your own site.