AO Breaking News – Obituary and News Summary: Lucian Freud dies at the age of 88 in London 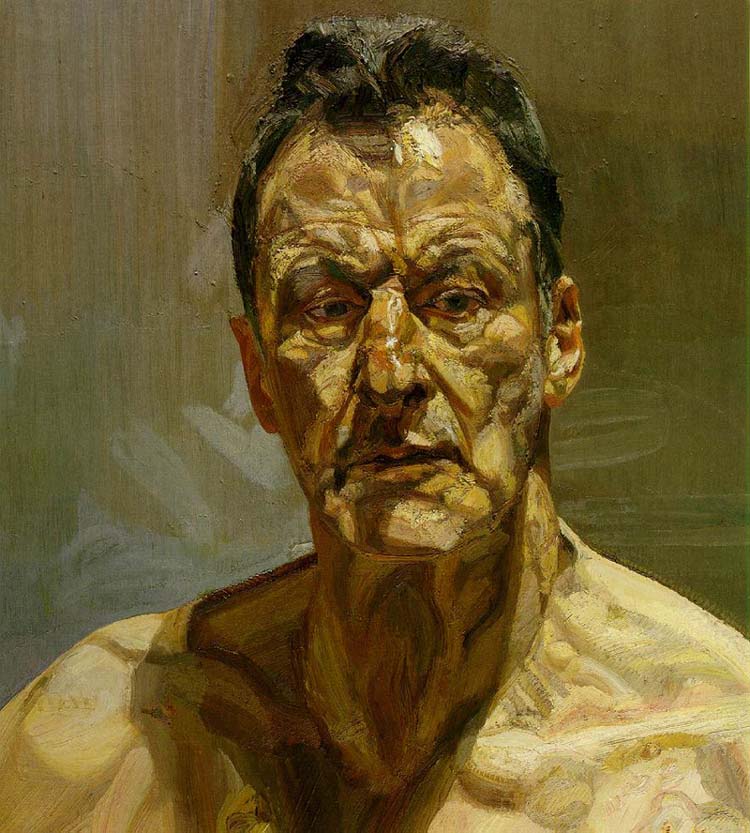 This Wednesday, Lucian Freud passed away in his London home at the age of 88. According to Mr. Freud’s dealer, William Acquavella of Acquavella Galleries, Freud suffered a brief illness before his death. Freud’s career is characterized by his thickly-painted portraits of friends and family, which brought forward and repositioned the genre of portraiture in the twentieth century. 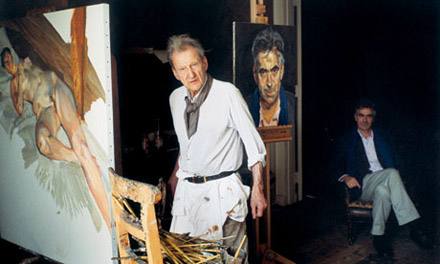 Lucian Freud with Martin Gayford in 2010, via The Guardian

Born on December 8th, 1922,  in Berlin, Germany, Lucian Freud, grandson of Sigmund Freud, was raised in England by his father, Ernst Ludwig Freud, and mother, Lucie nee Brasch, where Lucian briefly attended the Central School of Arts and Crafts, then the East Anglian School of Painting and Drawing as well as Goldsmiths, University of London. During the early 1950s, he held a position as a Visiting Tutor at the Slade School of Fine Art. Lucian Freud went on to become one of Britain’s most well-known contemporary artists and one of the most well-known artist of the twentieth century, whose dense oil paintings of nudes and portraits stood out with their commitment to traditionalist figurative sentiments, while the main current of modern art was becoming increasingly abstract. Freud’s depiction of his friends, family, neighbors, fellow artists and others were known to contain as much emotional power as the painter himself. They possessed an unique realism that relayed the stress, fatigue, and age that his subjects were unable to escape. 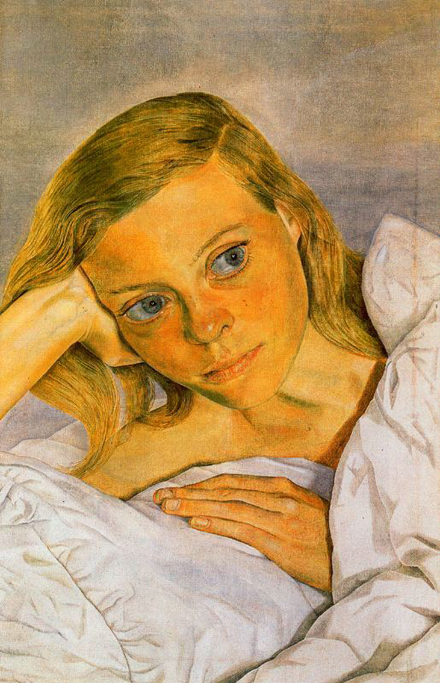 In 1948, Lucian Freud married Kitty Garman, daughter of sculptor Jacob Epstein, whom he would later divorce in 1952 and was also the subject of several portraits such as “Girl With Roses” (1947-1948), Girl with a Kitten” (1947), and “Girl With a White Dig” (1950-1951). After his divorce from Kitty in 1952, Freud married Lady Caroline Blackwood the next year, and made her the subject of the painting, “Girl in Bed” (1952). He later divorced Lady Blackwood in 1958. Freud is survived by at least 13 children from his first marriage to Kitty Garman and several romantic relationships. 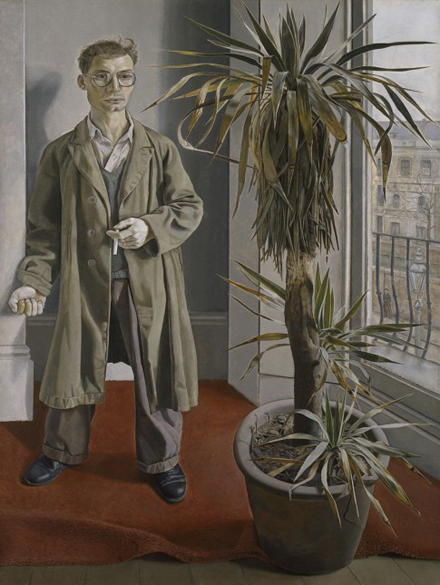 The span of Freud’s career was marked by a range of achievements. His “Interior at Paddington” of 1951 was awarded a prize at the Festival of Britain, and then the Purchaze Prize by the Arts Council of Great Britain. In 1954, Freud, along with Francis Bacon and Ben Nicholson, were selected as the representatives of Great Britain at the Venice Biennale, and in 1974, the Arts Council of Great Britain held a major retrospective of Freud’s work when he was at the age of 52. While in 1989, Freud was put on the short list for the Turner Prize, Lucian Freud was awarded the Order of Merit by Queen Elizabeth II in 1993 and would be bestowed the honor of painting Queen Elizabeth II in 2001. This portrait of the Queen, one of his most famous works, was described both as “thought-provoking and psychologically penetrating” and “extremely unflattering”, and continues to divide fans and critics today. The following year in 2002, Tate Britain organized another large retrospective of Freud’s work, 28 years after the retrospective at the Arts Council of Great Britain. 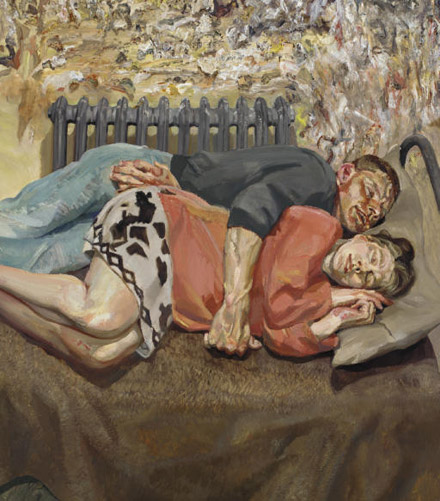 Freud’s works have fetched impressive and at times record-breaking prices in the art market. His portrait, “Benefits Supervisor Sleeping” (1995) was sold at auction by Christie’s in New York City for $33.6 million to Russian billionaire Roman Abramovich. The sale set a world record for purchase value of a painting by a living artist; the previous record holder was Jeff Koons’ Hanging Heart, which sold for $23.5 million in 2007. The previous auction record for a Freud painting was $19.3 million for “Ib and Her Husband” (1992).

BEAUTY COMES AT A PRICE.(PREVIEW)

Albany Times Union (Albany, NY) January 2, 1997 Byline: HENRY SHEEHAN The Orange County Register While she can’t be said to have done it totally successfully, in “The Mirror Has Two Faces,” Barbra Streisand does grapple with one of film’s most enduring — and vexing — questions: What constitutes beauty? in our site black swan movie

As far as most filmmakers are concerned, of course, the question is answered, at least when it comes to women. A beautiful woman is one with certain physical attributes — thick hair, a small nose, ripe lips and a curvaceous figure. Blond hair helps — particularly in the United States — but isn’t absolutely required.

To prove the truism that physical appearance is paramount when it comes to an actress’s success, one has only to look back over the careers that were powered exclusively by looks (Lana Turner, Hedy Lamarr) and the critical hurrahs that greet the appearance of a beautiful woman who can also act (Jessica Lange, Sophia Loren), as if the latter were some sort of unexpected bonus.

Streisand’s efforts to overturn this convention are undone by her ambivalence over her own looks. For the first half of the movie, she seems to insist her character, Rose, is not good-looking enough to compete on a purely superficial level with the gorgeous students in the math class of her husband, Gregory. If the playing field were more level, and personality, brains and compatibility were the criteria, then she’d win hands down.

That’s an appealing argument, and Streisand, who has been preoccupied with her looks to varying degrees throughout her career, is a perfect candidate to make it.

The problem may be that so much of the movie-going experience is rooted in enticements. It gives us a world where the exceptional is everyday. Beauty is commonplace and we’re invited to gaze upon it undisturbed.

Take, for example, another movie that opened recently, “The English Patient.” Even before the movie officially opened, it became clear that men and women were having extremely different reactions to the story of adulterous romance in the North African desert circa 1938.

The difference seems to be Ralph Fiennes, the English actor who came to the notice of American audiences with his role as a death-camp commandant in “Schindler’s List.” “The English Patient” is his first romantic leading part, and while his extremely reserved and muted acting style isn’t doing much to evoke a characterization, his physical presence is enough to provoke reactions from women. Men are waiting for Fiennes to go off and do something; for women Fiennes is doing all he has to: He’s being beautiful. go to site black swan movie

Last spring’s “The Truth About Cats & Dogs” featured Janeane Garofalo as a radio talk-show host so nervous about her looks that she has a model friend, played by Uma Thurman. Of course Garofalo isn’t plain; she’s cute. So the filmmakers put her hair up; presto chango, we accept she’s not good-looking.

For more proof, check out Alfred Hitchcock’s restored masterpiece, “Vertigo.” He thought he found his perfect woman in Grace Kelly and is said to have been devastated when she decided to give up show business for a life as a wealthy princess.

“Vertigo” was one of the results of that disappointment. James Stewart stars as a detective who is paid to keep a beautiful blond woman, Madeleine, from committing suicide. He fails, suffers a breakdown and then much later comes across a brunette woman, Judy, in the street.

Played by Kim Novak (also the film’s Madeleine), Judy succumbs to Stewart’s persistent seductions, and then finds herself in the grip of a makeover to end all makeovers.

What was neurosis to Hitchcock is simply business as usual to most filmmakers.

IN HOLLYWOOD, the standards for feminine beauty are pretty much, well, standard, so when Barbra Streisand made an ugly-duckling-turned-swan movie (“The Mirror has Two Faces”) her own ambiguity about her looks came through. Meanwhile, men and women are having different reactions to Ralph Fiennes as “The English Patient”: men want him to do something, women think he’s doing enough.

This entry was posted on Thursday, July 21st, 2011 at 11:59 pm and is filed under Art News. You can follow any responses to this entry through the RSS 2.0 feed. You can leave a response, or trackback from your own site.