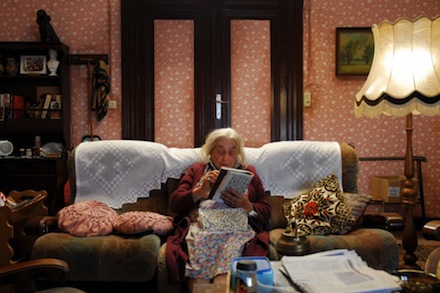 American trained, Israeli born artist Omer Fast is currently showing three installation pieces for which he has become known; “Nostalgia” (2009), “The Casting” (2007), and “De Grote Boodschap” (2007), all at the Netherlands Media Art Institute.  All three works show Fast’s interest in the cinematic construction of narrative via documentary and film reenactment. 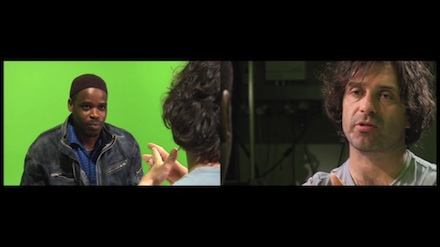 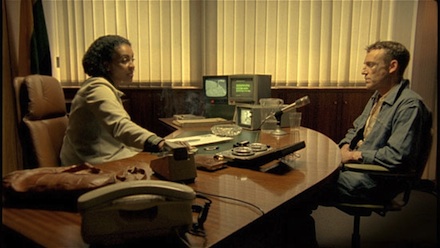 The three-part “Nostalgia” (2009), originally shown in the South London Gallery, is a film installation that is based on the story of a West African man’s attempt to gain asylum in the UK.  The first part has a UK game warden attempting to build an animal trap based on the African man’s story, while the second part is a mock interview between a child soldier and an artist.  Finally, the third part is a reenactment of the African man’s story as a science fiction movie in which he attempts to flee a failing, dystopian Europe and relocate to a colony in West Africa.  The films are the artists purely subjective look at political themes, like immigration, while nevertheless being attempts to structure such topics in a cinematic narrative. 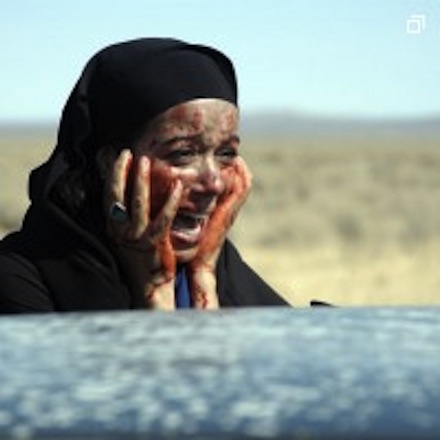 “The Casting” (2007) is a film of an American Army sergeant’s two tales; one about a woman from Germany who injures herself, and a second about an event that happened outside of Baghdad.  Two screens show, via stills that one can barely tell are not photographs, different actors telling the stories in a series of silent tableaux.  The film is thus multi-layered in nature and leaps back and forth between the two stories, while a third storyline, namely the director asking an actor who auditions for the role of the sergeant questions, interrupts the first two.

“De Grote Boodschap” (2007)  [The Big Message] was filmed in the Belgian city of Mechelen and concerns the overlapping lives of apartment dwellers.  The film is disquieting in its ability to make one question one’s own safety, due no doubt to the fact wherever one begins viewing, there are always unanswered questions.

Fast has been called the next Steve McQueen (Turner prize winning video artist), and it is not hard to see why.  For the artist has, in a relatively short career (he graduated the MFA at Hunter College in 2000), made some video art that has accumulated numerous prizes.  “Nostalgia” (2009) won the Preis der Nationalgalerie für Junge Kunst in Berlin, while “The Casting” (2007) won the Whitney Museum’s Bucksbaum Award in 2008.  Recent solo exhibitions include the Whitney Museum of American Art, New York, and the Kunsthaus Baselland, Switzerland. 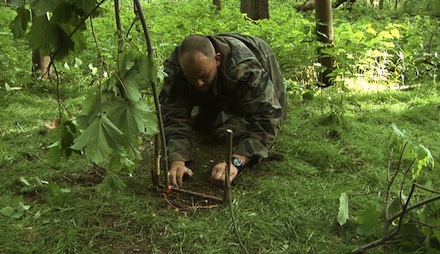 Fast writes his own scripts, directs and edits the films himself, and is interested in the interplay between personal and collective histories as played out in film, television and video. Fast’s works attempts to show the complexity of relationships between people from different cultures, usually by showing moments of tension and dependence and via topics such as immigration, asylum, and war.  Fast’s work forces the viewer to see how cinema and filmmaking shape our perception of the world around us.  Fast is currently working on his first feature film.

Omer Fast’s films can be seen at the Netherlands Media Art Institute until July 23rd, 2011.

This entry was posted on Friday, July 15th, 2011 at 5:31 pm and is filed under Go See. You can follow any responses to this entry through the RSS 2.0 feed. You can leave a response, or trackback from your own site.