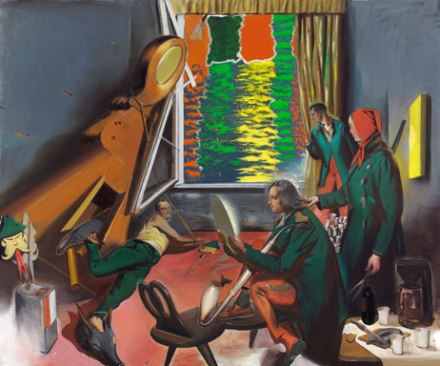 The Museum Frieder Burda in Baden-Baden, Germany is hosting a large-scale retrospective of Leipzig-based artist Neo Rauch (born 1960). Showing about forty paintings, drawings, prints, and sculptures, the exhibition covers the past twenty years of Rauch’s career. Currently an honorary professor at the Academy of Visual Arts in Leipzig, Rauch is the representative of the New Leipzig School of painting distinguished by the figurative visual language, narrative content, and technical perfection. 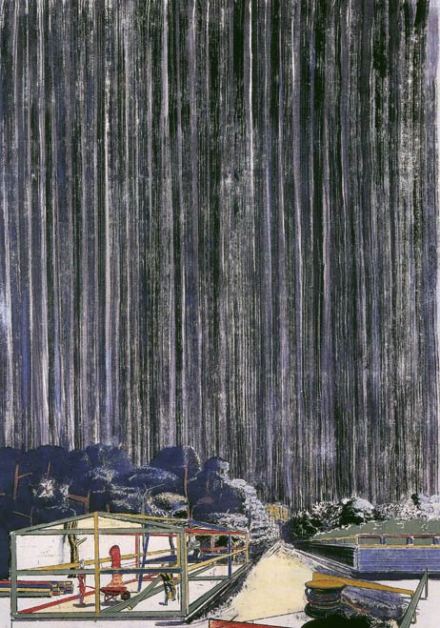 Often compared with Pop art, Neosurrealism, and New Objectivity, Rauch’s work also features regional German traits. Art historian Robert Storr said that Rauch’s paintings “speak a Pop Art idiom with an East German accent.” The artist himself points out the importance of his adherence to German culture in the interview for the Spiegel: “I wouldn’t at any rate refuse the designation, because I believe that the world is really fully colored only when there are strongly molded regionalisms at a high level. As opposed to some sort of cultural Esperanto.”

What does it mean to be a painter with East German cultural heritage in the contemporary art scene? The German Democratic Republic (GDR), also known as East Germany, was a Communist state patronized by the Soviet Union until the collapse of the Berlin Wall in 1989. Governed by the state policies regarding art production, the Art Academy in Leipzig taught its students “drawing from nude models…the rules of perspective and analyzing formal composition.” Compared with the non-figurative abstraction in the West, this curriculum seemed outdated. Rauch was a distinguished student in the Leipzig Art Academy. The real change in curriculum of the Academy appeared after the unification of Germany in 1989. By the late 1990’s the “New Leipzig School” group of painters (including Tim Eitel, Tilo Baumgärtel, Matthias Weischer, David Schnell, Christoph Ruckhäberle and Martin Kobe) gained international recognition. Although Rauch acknowledges his ties to the Leipzig school it seems quite difficult to distinguish the “authentic German” from his art.  In his article about Neo Rauch, Jan Thorn-Prikker from the Goethe-Institut coined the term “brand name Leipzig” to describe the roots of Rauch’s art. Thorn-Prikker explained that a stage-like, narrative composition and naturalism in rendering forms, as seen on Die Fuge (2007) and the Interview (2006)  reflects Rauch’s German heritage. 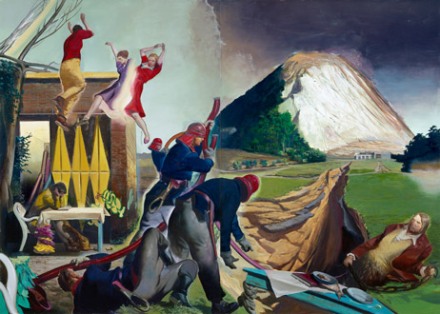 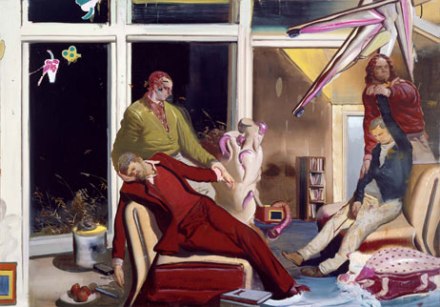 On the other hand, the same features may tie Rauch to Neosurrealist art despite his rejection of such a connection. It appears even harder to differentiate the “authentic German” from the Pop Art in the comic book inspired paintings such as Ausflug (1998) and Sucher (1997). 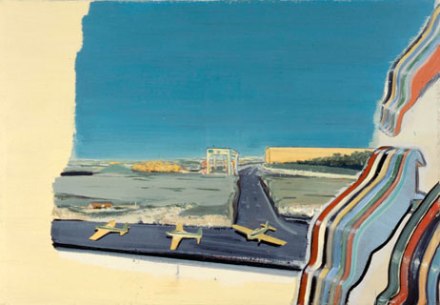 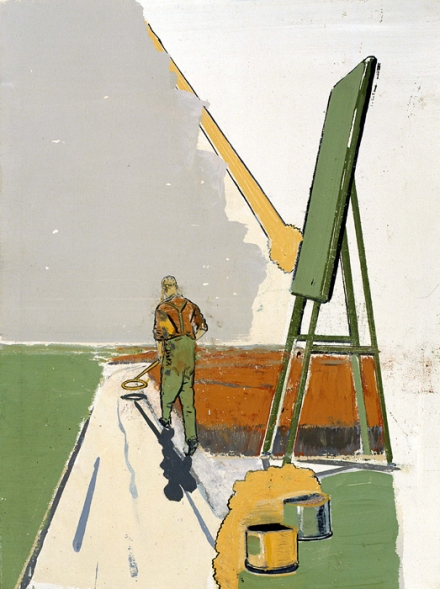 In the context of contemporary global art market, it appears that the implication of East German heritage in Rauch’s art is more substantial than his eclectic visual language. However, the real questions are whether and to what extent Rauch communicates German past through his art.

This entry was posted on Friday, September 2nd, 2011 at 6:31 pm and is filed under Art News, Go See. You can follow any responses to this entry through the RSS 2.0 feed. You can leave a response, or trackback from your own site.