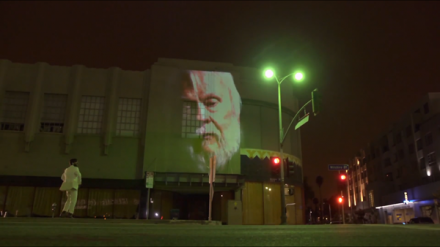 Still from PST video with John Baldessari and Jason Schwartzman. Via CalArts.

Began by the Getty Foundation nearly ten years ago, the Pacific Standard Time (PST) initiative has done well, to say the least, with the most recent issue of Artforum almost completely devoted to art in L.A. While PST-related programming began in early September, the weekend of October 1st was the highly anticipated official “opening weekend,” with sixteen exhibitions opening across the city. 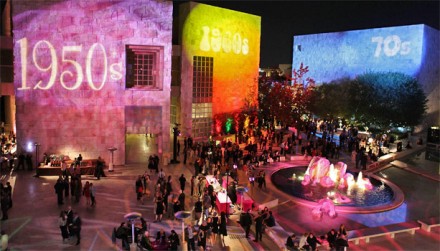 The opening light show at the Getty Center. Via Artinfo.

Events included an extravagant gala reception for the Getty Center’s Pacific Standard Time: Crosscurrents in L.A. Painting and Sculpture, 1950-1970, which featured a larger-than-life projection show narrating a history of the L.A. artistic and cultural landscape from 1945-1980; the “punk rock” party for the Museum of Contemporary Art’s Under the Big Black Sun: California Art, 1974-1981, deejayed by the hardcore punk icon Henry Rollins; as well as openings for the Hammer Museum’s Now Dig This! Art and Black Los Angeles 1960-1980 and the Los Angeles County Museum of Art’s California Design, 1930-1965: “Living the Modern Way.” These openings at all of the major institutions in the city, as well as programming at other venues throughout the weekend, such as a daylong performance by Linda Vallejo with The Waitresses at Otis College of Art and Design, and a slew of star-studded after parties, made for a busy weekend. The initiative even hosted free shuttles between venues, and all museums were free of charge for the weekend. 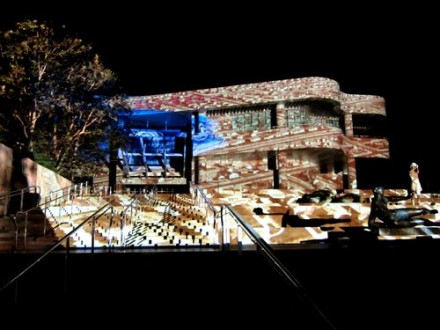 In the spirit of true collaboration, PST is an initiative began by the Getty in 2002 as a research initiative archiving and examining histories of art in Los Angeles after WWII and the emergence of the city as an international art center. Many of these histories have long been buried and, as the Getty saw it, were in danger of being lost. What began as a project of the Getty, though, quickly grew into a venture that would include 60 institutions and $10 million in grants to preserve the archives of L.A. and California art across the state. As conversations evolved between these institutions and the diversity and dynamism of these histories began to become more apparent, PST broke through the walls of the Getty Center and spread throughout art, cultural, and historical museums, as well as university campus galleries and non-profit spaces, from Los Angeles inland to Palm Springs, Santa Barbara down to San Diego. 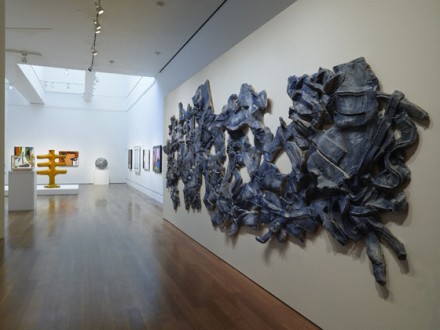 Installation view of Pacific Standard Time: Crosscurrents in Painting and Sculpture, 1950-1970 at the Getty Center with John Mason’s Blue Wall (1958) in foreground. Via Artnet. 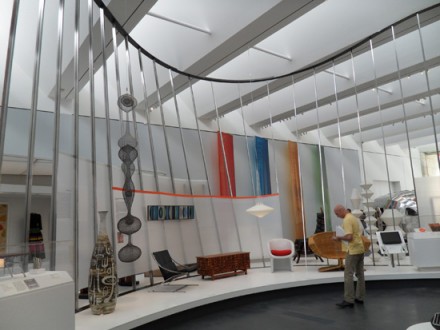 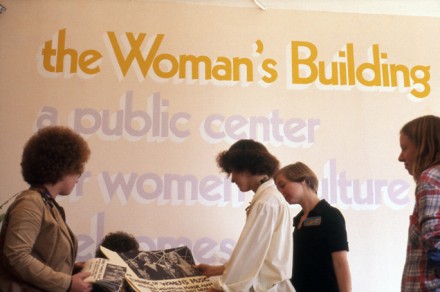 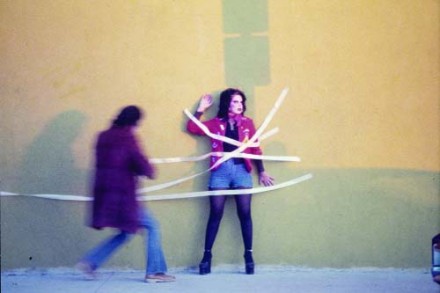 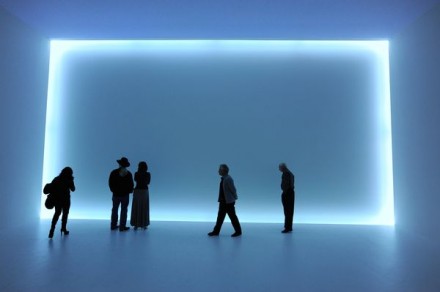 The result is a mind-blowing range of exhibitions that survey different aspects of art in L.A., from artistic practices and movements, to cultural and political activism, to feminism and performance, as well as the emergence of ‘the scene’ itself. Interestingly, the institutions have allowed overlaps to emerge wherein artists appear in several exhibitions, but examined through different perspectives. In doing so, the fluidity of history is made transparent, and the boundaries of a system once based on rigid classification give way to an understanding of the complexity of networks within and across which art happens. In many of these cases, the institutions have collaborated on public programming, such as in the Suzanne Lacy re-performance, Three Weeks in January, that will be co-presented by Los Angeles Contemporary Exhibitions and the Getty in January as part of the Performance and Public Art Festival, which is being organized by LAXART and the Hammer Museum. Other artists appear in several exhibitions as well, such as John Baldessari, Judy Chicago, Charles Gaines, Robert Irwin, Paul McCarthy, Ed Ruscha, and James Turrell.

To help navigate the overwhelming calendar of events, the Getty has launched a website where visitors can see the scope of the exhibition across the institutions. There is also a blog that includes a host of interviews with those associated with the exhibitions, as well as statements by artists and curators, and much more. A multi-million dollar ad campaign has been launched, leaders from the major museums in the area explain, in order to reach a wider audience. The campaign includes a series of shorts that bring together an L.A. artist with an L.A. celebrity figure. So far there has been an interview of Ed Ruscha by Red Hot Chili Peppers front man Anthony Kiedis (this will screen in selected theaters around L.A. as a 30-second short), a humorous skit with Jason Schwartzman and John Baldessari, and a photo session including Ice Cube and some Eames designs. 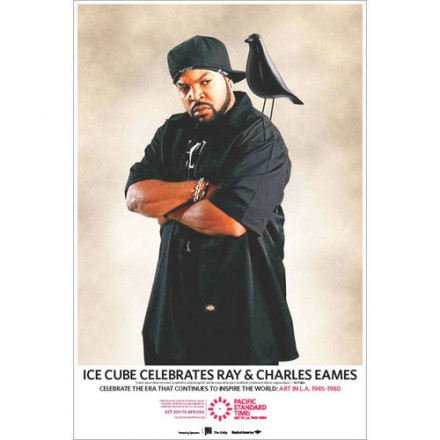 Many of the articles written on PST have focused on its significance in terms of (hopefully) raising arts and cultural tourism to L.A., as well as attracting more patrons from within the city itself. While these are no doubt important aspects of such a large project that, in many ways, could perhaps only happen in a city so young, it is also important to recognize the kind of effect it will have on those who already live in the city. In many cases, this will be the first time residents have been given access to some of this material, and the initiative is as much a “looking back” on a history as it is an educating of the city’s community (including artists and others) on a very much buried history. It has quickly become a source of inspiration for many working within Los Angeles, stimulating future collaborations and exhibitions, invigorating a younger generation of artists and researchers. As many have already been predicting, PST is only a beginning.

To date, thirty-seven exhibitions have opened. The next two weeks will see another ten open, and events are happening almost daily over the next four months. PST makes it easy to get involved through user friendly web-based platforms as well as the actual museums and venues, creating and sharing an exciting moment in L.A. history.

This entry was posted on Tuesday, October 11th, 2011 at 9:30 am and is filed under Art News, Events, Go See. You can follow any responses to this entry through the RSS 2.0 feed. You can leave a response, or trackback from your own site.