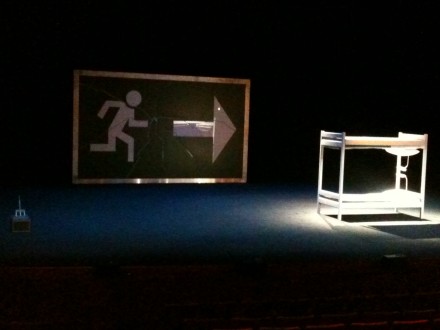 Photo on site for Art Observed by Tara Sheena.

In a production for the Performa 11 Biennial, co-commissioned by the Royal Danish Theater and the Bergen International Festival, the artist duo of Elmgreen & Dragset presented their satirical theatre work, Happy Days in the Art World. A
referential collage of Samuel Beckett’s Happy Days and Waiting for Godot, as well as Elmgreen & Dragset’s own play, Drama Queens, the work effectively combines a stream-of-consciousness humor with a bare bones set to reveal a contemporary commentary on the sociopolitical implications of the art world. 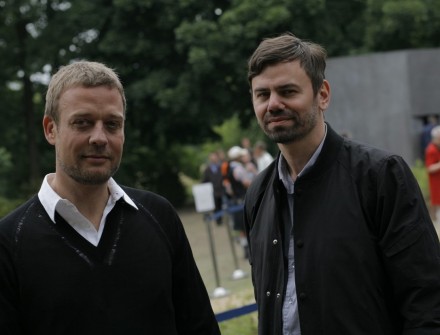 The characters Id and Me—the initials of the artists—are played by Joseph Fiennes and Charles Edwards, respectively. Id is the more outlandish, impulsive artist of the two, wearing his heart on his sleeve and having little restraint in his reactivity. Me, in necessary contrast, is the more conservative of the two, constantly expressing his myriad of apprehensions in highly analytical fashion. Set in the present day in an ambiguous location, the two main characters, modeled after Elmgreen & Dragset, find themselves trapped in a pseudo-prison, with only the clothes on their backs as the fateful evidence for how they ended up there. 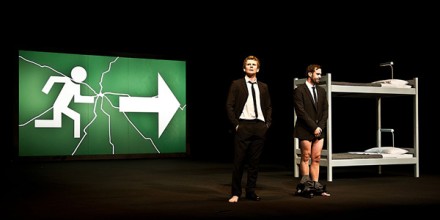 What develops is the signature brand of Beckett apocolyptia—Will they ever escape? What hope is there? What are they even searching for? Often, it is unclear if the characters know what they desire, but that allows the audience to serve as an additional character in this theatrical trope. Everyone, audience and performer, seem to be on the same level of knowledge and experience. Because of this, the outlandish rants on Facebook’s democracy, Lindsay Lohan’s multiple stints in jail, and the elusive relationship between curators and artists are oddly fitting within the context of the narrative. The struggle of the artist in “Happy Days…” proves to be the underlying theme of the work. However, this struggle takes on many forms when illuminated in the twenty-first century context. The position of the artist is constantly revered and mocked. A paradoxical limbo of emotion  expressed by Id and Me reveals itself over and over again in their hyperbolic exclamations. “You can’t fire me for serving no purpose,” Me says at one point, “That’s what artists do!” Ideas concerning democracy, ownership, partnership, and technology offer a deeper context for the characters, but also give the audience many different platforms to relate to the work. In effect, the characters and audience take this journey of realization together. 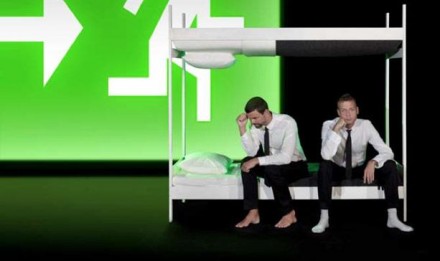 The dynamic duo of Michael Elmgreen and Ingmar Dragset has sustained a career creating theatre works and gallery installations to international acclaim since 1995. With a repertoire of over sixty performance and gallery installations, Happy Days… marks their newest work for the stage. Much like their Performa 11 commission, their body of work primarily uses their keen brand of subversive humor to address serious socio-political concerns. They are best known for 2005’s Prada Marfa project: an adobe and brick structure resembling a Prada store just off Route 90 in Valentine, Texas. Their next project is the Fourth Plinth commission in Trafalgar Square, London in February 2012.

This entry was posted on Sunday, November 6th, 2011 at 12:02 am and is filed under Art News. You can follow any responses to this entry through the RSS 2.0 feed. You can leave a response, or trackback from your own site.