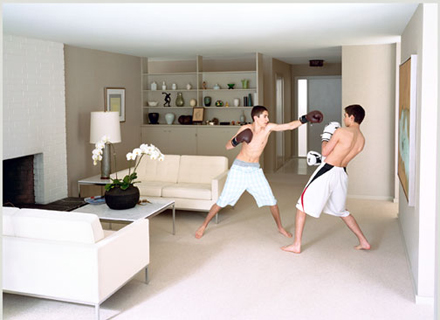 Jeff Wall’s latest solo show at the Marian Goodman Gallery, New Photographs, consists of seven large scale photographs and four smaller ones. Most made within the past two years, the works are a continuation on the neo-realistic, documentary style parameters the artist has been working within in recent years, reflecting various pieces of a collective cultural fabric that Wall weaves throughout his ouvre. 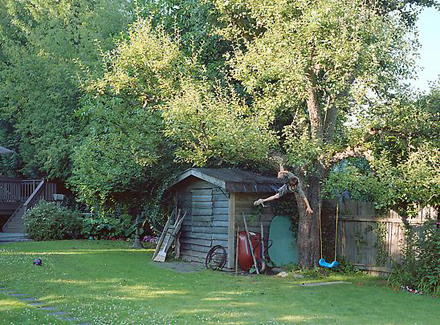 The photographs are an eclectic collection of the stumbled upon and the choreographed: landscapes, portraits, interior shots, a concert, and two action shots. Boxing depicts two adolescents in boxing gloves mid-swing, the scene contained within a stylish urban apartment sans ropes. Another photograph, Young Man Wet With Rain, shows a solitary figure in black and white, who towers over the viewer in scale yet remains elusive through a set of downcast eyes. Upon closer inspection, one notices his jacket is flecked with droplets of rain that reflect light. It is as if one passed him on their way to the train, whereas the boxing photo feels more voyeuristic, as though one had to have been invited to the match. Boy Falling From A Tree conveys a similar had-to-be-there quality, as though the viewer is his youthful friend, a barbecuing neighbor, or a watchful mother, peripherally catching the fall. 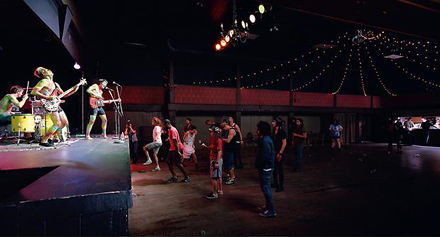 Two of the photographs possess a calculated observation with a candid sensibility—Band & A Crowd and Ivan Sayers, costume historian, lectures at the University Women’s Club, Vancouver, 7 December 2009. Virginia Newton-Moss wears a British ensemble c. 1910, from Sayers’ collection. The viewer has a sense of participation in each event. The sparsely attended concert of a zany indie rock band could be in Brooklyn or Austin, but one can distinctly feel their presence at the side stage watching the crowd and the band perform together, and the concessions stand in the background. The other photograph of the costume lecturer with the model donning turn of the century garb also puts the viewer in a participatory role. The spectator is placed in the front row of an esoteric and highly specific lecture, with only reflected glimpses of fellow classmates through the mirrored french doors. 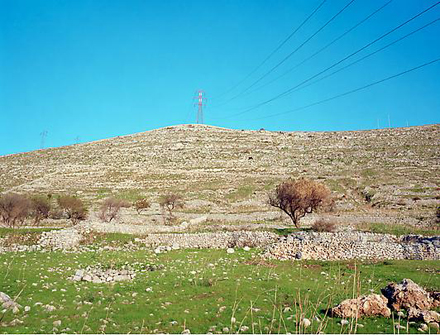 There are technically three landscape photographs, two in color and one in black and white. Two are traditional in format—there is depth of field, foliage, and ample sky. One of these is brilliant in its coloring and the other is in black and white. Both are images of hills in Sicily. However, the colored photograph, Hillside Near Regusa, is a much more spanning shot in the sense of foreground, middle ground, and a background replete with an electric tower running through it, whereas the black and white photograph is cropped and devoid of any human touches. The other photograph, Headstone On An Ossuary, Sicily, is of a grave, which appears to be in the city as there are remnants of time-weathered architecture surrounding the tomb. The show in total seems to be Wall’s specifically selected cross sections of one long journey, which are presented as a collection of disparate yet tangible scenes. 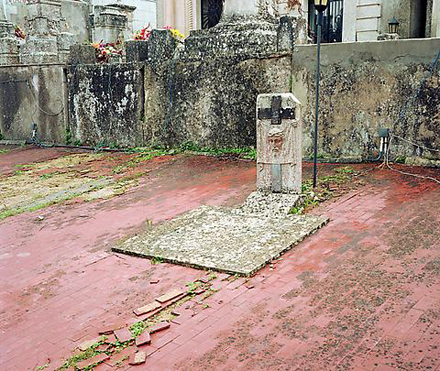 Jeff Wall was born in Vancouver in 1946. He attended the University of British Columbia before moving to London to study at Courtauld Institute of Art. Notable shows include retrospectives at Schaulager and the Tate Modern in 2005, the MoMA and the Art Institute of Chicago in 2007, the SFMoMA, Tamayo Museum, and Vancouver Art Gallery in 2008, the Palais des Beaux Arts in 2011, with a solo show at the Kunstsammlungen in 2010.

Entertainment Close-up October 24, 2011 Tootie Pie Company said that its first Groupon campaign in 2011 was a success, reporting more than 6,000 possible new customers will visit the three San Antonio-area Tootie Pie Gourmet Cafe locations, a jump over the more than 2,000 customers from Groupon in 2010. go to web site groupon dallas

“As we head into the holidays, we thought now was a good time to increase traffic to our Cafes,” said Don Merrill, President and CEO. “So far, this new Groupon campaign has doubled last year’s Groupon campaign sales. So, it is clear that we have not only achieved, but surpassed our goals for increased traffic. To date, we have used Groupon for our Cafes in San Antonio and Fredericksburg and will follow up with Austin and Dallas in the coming weeks.” Groupon, launched in November 2008 in Chicago, features a daily deal on the best stuff to do, eat, see and buy in 45 countries around the world. The latest Groupon deal featuring Tootie Pie Gourmet Cafe offered locals the choice of a prix fix menu for either two or four people at a 57 percent savings. see here groupon dallas

This entry was posted on Monday, January 16th, 2012 at 12:01 am and is filed under Art News, Go See. You can follow any responses to this entry through the RSS 2.0 feed. You can leave a response, or trackback from your own site.