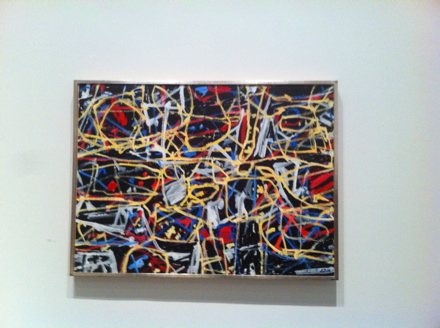 Jean Dubuffet, Fluence (1984). All photos on site for Art Observed by Rachel Willis.

On January 19 The Pace Gallery debuted its newest exhibition, Jean Dubuffet: The Last Two Years. The show is made up of approximately 20 paintings chosen from the artist’s final body of work, from the years 1983-4. Viewers are immediately confronted with a yellow wall and a red neon sign, written in Dubuffet’s script, with the title of the show. The colors of the sign are evocative of the highly saturated primary colors present within the exhibition. The paintings are divided amongst the gallery’s two rooms; the front room is filled with the artist’s large, more cheerful paintings, while the back room hosts smaller, dark, more intimate and brooding works. These expressive acrylic paintings, with their minor figurative references, are adamantly abstract and indicative of Dubuffet’s uncompromising creative mindset during the last years of his life. 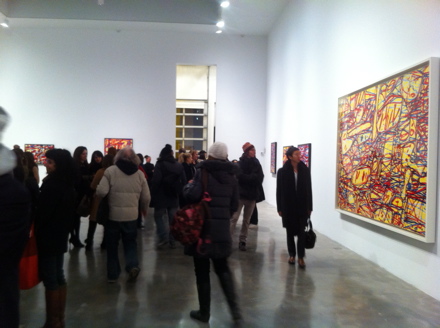 Front room at the Jean Dubuffet Opening at Pace Gallery 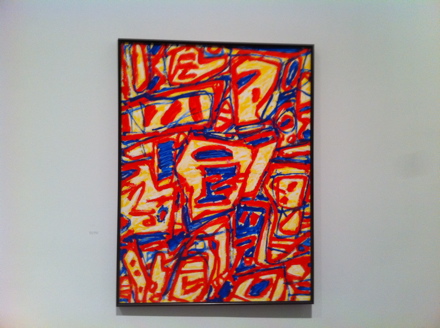 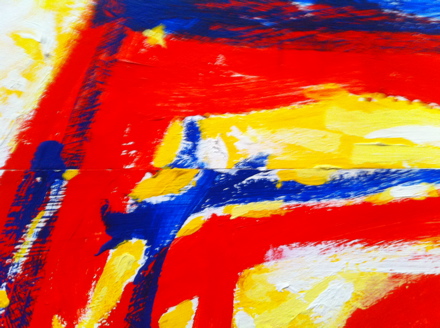 Dubuffet’s career began and ended in Paris, and was primarily influenced by European aesthetics, particularly Cubism and Surrealism. Dubuffet was also a sculptor and, like his close friends and contemporaries such as Pierre Matisse, he was influenced by African Primitive art. He built his reputation by incorporating dark and psychologically pointed imagery; many of the figures in his most quintessential works have a reductive and childlike appearance and the paintings themselves have a primitive demeanor that has been likened to that of cave drawings. Although Dubuffet received both critical acclaim and commercial success throughout his career for these pieces, during the final stages of his life he expressed the need to break away from figuration altogether. This show is a clear representation of the artist’s last attempt to produce a body of work that reconnected him with, what he believed to be, the basic elements of painting. 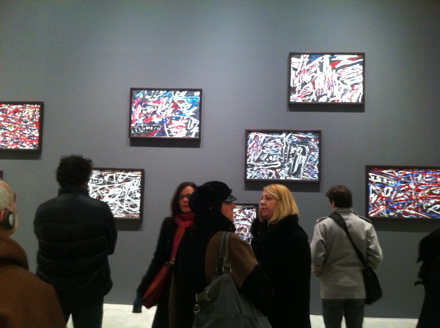 Back room at the Jean Dubuffet Opening at Pace Gallery

If the 1980s experienced a painting renaissance with young artists like Basquiat in the United States, similarly in Europe there emerged a renewed interest in abstraction. Dubuffet had always felt a connection with outsider art, or “art brut” as he called it, and in attempting to liberate his work from any referential forms, he moved his late work in an unexpected direction. In his last body of work there is a strong emphasis on what the Abstract Expressionists had been doing throughout the 50s and 60s; from Hoffman’s use of primary colors to de Kooning’s synthesis of Cubism and Surrealism in paintings like Excavation. 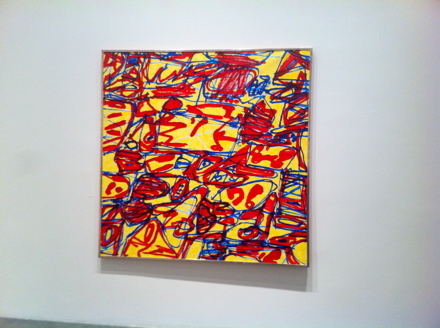 While viewing the two rooms at Pace, it is possible to conjecture that Dubuffet’s declining health may have played a part in both the color palette and subject matter of these pieces. The contrast between the work in the front and back rooms is stark; the first group of paintings are bright and excited, with primary colors, gestural strokes, and large dynamic shapes, while the second group incorporates significantly more black than the others and the lines seem to feel as though they were placed with a depressing intentionality. Like the somber tones that overtook the last works of Mark Rothko, one might posit that these colors and shapes fluctuated with Dubuffet’s health. 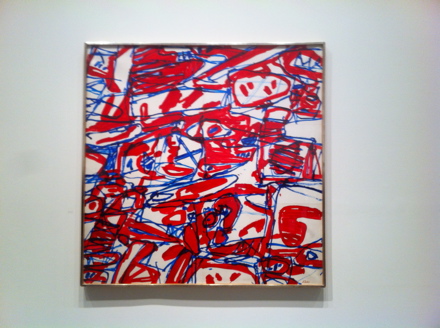 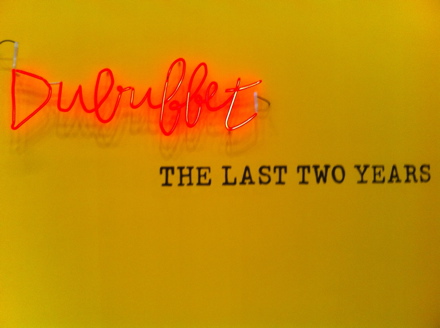 Entrance sign at the Jean Dubuffet Opening at Pace Gallery

This entry was posted on Saturday, February 11th, 2012 at 12:01 am and is filed under AO On Site, Go See. You can follow any responses to this entry through the RSS 2.0 feed. You can leave a response, or trackback from your own site.